This article covers breaking news and events in March 2004. 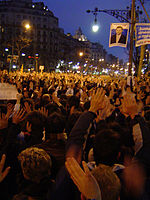 Second NATO expansion to the east