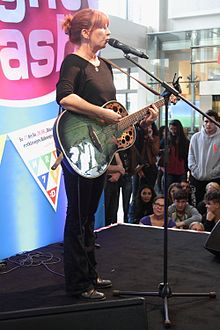 After graduating from high school in 1993, she graduated from the KFH Cologne in 1999 as a social worker . In May 2001 she had her first public appearance in the Café Storch in Cologne .

She can also be seen on the WDR broadcast Stratmann alongside Gregor Mönter (“Herr Trost”) in the role of “Fräulein Schochz”.

Schönleber was awarded the Bielefeld Cabaret Prize in 2003 and the Obernburger Mühlstein Cabaret / Comedy Young Talent Prize in 2005.

Since 2014 she has been playing the annual end-of-year revue “The bag is closed” with Anika Auweiler in the Cologne cabaret Klüngelpütz.

In 2018 she founded the Sisters of Comedy GbR together with Carmela de Feo and Patrizia Moresco . Since then, you have been organizing and coordinating the nationwide event that takes place on November 12th every year, at which women appear in comedy shows in numerous cities in order to set an example against sexism and violence against women. In all shows, the Sisters collect donations for local women's aid projects.

Dagmar Schönleber was a participant in the Celle School in 2018 .