The Obernburger Mühlstein is a young talent award in the cabaret and comedy category , which is awarded annually in and by the Kochsmühle cabaret in Obernburg am Main .

The Obernburger Mühlstein , which has been awarded since 1989, is a coveted and literally weighty award for young cabaret and cabaret artists in German-speaking countries. What was a true marathon for the jury and the audience at the beginning in the pre-Christmas period - a complete program was presented on five days of the week - was soon concentrated on an evening performance. The working group Kul-Tour eV, the organizer of the competition and head of the Kochsmühle cabaret, offers talents from all over the German-speaking area the opportunity to present 20-minute excerpts from their respective repertoire. The audience and a multi-member jury finally decide on the award of the prize. This usually happens at midnight. 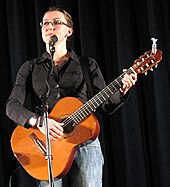 The young cabaret artists who have received the Obernburger Mühlstein for 24 years from 1989 to 2015 are: