from Wikipedia, the free encyclopedia
This is the spotted version , flagged on July 28, 2020 . There is 1 pending change that has yet to be viewed. 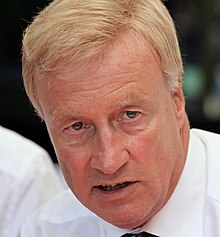 Ole von Beust is the youngest of three sons of Achim-Helge Freiherr von Beust († 2007) and his wife Hanna geb. Wolff († 1995). Beust was the name of an old noble family in the Altmark region with ancestral home in Büste near Stendal . His name until he came of age was Carl-Friedrich Arp Freiherr von Beust. As a child, he was raised by his grandmother in Low German "Ole Popp" (old doll called). The new name Ole he let von Beust on reaching the age of majority in a civil ceremony Enter.

Von Beust completed his Abitur in 1973 at the Hamburg Walddörfer-Gymnasium . In 1975 he began to study law , which he completed in 1980 with the first and 1983 with the second state examination. Since then he has been admitted to the bar as an independent lawyer . Since October 1, 2010, von Beust has also been Senior Advisor to the management consultancy Roland Berger and co-managing partner of von Beust & Coll. Consulting company that offers strategy and communication consulting for companies and associations. Since March 2012 he has been Senior Advisor to the Investment Support and Promotion Agency of Turkey (ISPAT). The end of his activity for the authority that he had announced for the end of 2016 was denied by ISPAT in May 2017.

Since May 2013 lives in a registered civil partnership .

In the state election in Hamburg in 1991 , the CDU reached 35.1% of the vote. The election was contested by several CDU members, including Markus Wegner , because of the undemocratic nomination of candidates within the CDU . Before the Hamburg Constitutional Court , which declared the elections invalid in 1993, Beust appeared as legal advisor for the Hamburg CDU. In the state elections in Hamburg in 1993 , the CDU only achieved 25.1%, while Markus Wegner, with the voters' association Instead of Party , surprisingly moved into Hamburg's town hall with 5.6%. The loser in the election was Jürgen Echternach , the long-time state chairman of the CDU, who had already given up the state chair in the year before the election.

In the state election in Hamburg in 1997 , Beust was the top candidate of the CDU. Since his homosexuality was already an open secret within the party, Beust believes today that it was only established because nobody suspected that he could win. Despite some gains (CDU 30.7%), the election did not lead to a change of government. But the government coalition under Mayor Henning Voscherau, made up of the SPD (36.2%) and the STATT party (3.5%), could not continue to govern because the latter failed to pass the 5% hurdle . On April 21, 2001, he was again elected as the top candidate. In the general election in Hamburg in 2001 , the CDU under Beust's leadership only achieved 26.2%, while the SPD remained the strongest parliamentary group with 36.5%. With the surprisingly strong Rule of Law Offensive party (PRO) (19.4% of the votes) and the FDP (5.1% of the votes), von Beust was still able to form a government and suspended his mandate.

From 1993 to 2001 von Beust was parliamentary group leader of the CDU in the Hamburg citizenship.

First Mayor of the Free and Hanseatic City of Hamburg

On October 31, 2001, he was elected First Mayor . After Kurt Sieveking, Beust was the second First Mayor of Hamburg to be appointed by the CDU. He appointed Ronald Schill (PRO), a controversial public figure, to be his deputy . As von Beust later explained, he was well aware that this was "difficult" in character:

“Schill was a means to an end. The coalition with him was a power-political calculation. I was of the opinion that after 44 years the SPD would have to go, and I had hoped that he would find his way into office. "

On August 29, 2002, Schill, as Hamburg Senator, gave a speech in the Bundestag in a debate on the financing of the flood disaster in East Germany. In it, he criticized the foreigner policy of the red-green federal government and accused it of having paid too much for immigrants instead of creating reserves for disasters. That caused a stir for days. Beust expressed himself critically: "Whoever speaks in the Bundestag or in the Bundesrat has to speak for the country, not as party chairman". Schill did not speak on behalf of the Hamburg Senate.

In August 2003, Ole von Beust dismissed the State Councilor of the Interior Authority Walter Wellinghausen , who had been hit by persistent allegations (official offenses ), as well as the Interior Senator and Second Mayor Ronald Schill . According to von Beust, Schill wanted to prevent Wellinghausen's dismissal by threatening to make it known that Beust had a relationship with Justice Senator Roger Kusch and that he had mixed politics and private life in the same way as Wellinghausen. Beust and Kusch firmly rejected this: They are only college friends and Beust is Kusch's landlord. Schill reiterated his accusations and told of allegedly "clear noises in the apartment" during a visit by Beust to Kusch. He did not blackmail Beust, but merely asked him not to apply two standards to Wellinghausen and himself.

A little later , Roger Kusch publicly came out as homosexual. Ole von Beust was shortly thereafter by a unabgesprochenes interview his father as homosexual outed . He later said he was happy about it and saw it as positive that everything in this regard had already been said by his father. After Schill's dismissal, Beust's popularity rose sharply, while Schill lost sympathy.

On December 9, 2003, von Beust dissolved the government coalition and announced an early election for 2004. On December 18, 2003, Schill and five other MPs resigned from the 'Rule of Law Offensive' party and founded the Ronald Schill parliamentary group .

The citizenship election on February 29, 2004 , before which the CDU will vote with the triad slogan "Michel - Alster - Ole" and "Ole. Consequent. Fair. Engaged. ”Had contested a pure personal election campaign with von Beust, ended with an election victory for the CDU (47.2%). The CDU thus achieved an absolute majority in Hamburg for the first time; FDP and PRO did not get over the five percent hurdle and left the Hamburg citizenship . Schill moved to Brazil after the election defeat.

There was some criticism of Beust's election campaign from the ranks of the citizens, the red-green opposition and the media. Shortly before the election, ARD broadcast a critical article on the Springer publishing house in its Panorama program , which at the time dominated around 85 percent of the Hamburg newspaper market and was accused of campaigning in favor of Beust. 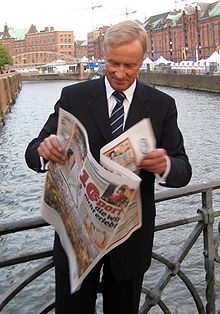 At the beginning of his second term of office von Beust reduced the senate from ten to nine senators ( Senate von Beust II ). Because of the absolute majority, the cabinet now consisted only of CDU senators and four non-party members. After two years, Beust fired his Justice Senator Roger Kusch . He justified this with the fact that his authority had come into possession of confidential documents from a parliamentary committee of inquiry without permission and passed them on. Kusch later stated that the unlawful receipt of these documents was merely a "friendly gesture" and a "small compensation for the completely unacceptable treatment" when he was questioned before the committee.

At a closed meeting of the CDU in Jesteburg , it was decided to tailor the 2008 election campaign to the mayor as in 2004 (motto: “Alliance for Ole”). On April 1, 2007, von Beust announced that he would withdraw from politics in the event of a defeat by the SPD top candidate Michael Naumann in the state elections on February 24, 2008 . At the regional meeting of representatives of the Hamburg CDU on June 2, 2007, Beust was elected to number 1 on the state list with a result of 98% (193 of 197 votes). According to a study by the University of Hamburg , von Beust received measurable support in the election campaign from the Hamburger Bild newspaper. In the general election, the CDU received 42.6% of the vote, 4.6% less than in 2004.

Since the CDU had lost its absolute majority of the parliamentary seats, Ole von Beust formed a coalition government with the Green Alternative List (GAL) , the first black-green coalition at state level ( Senate von Beust III ). He said he saw some similarities at the federal level. However, the CDU is striving for an alliance with the FDP again.

On July 18, 2010, the day of the referendum on the school reform in Hamburg , Ole von Beust announced his resignation as First Mayor of Hamburg with effect from August 25, 2010 at a press conference in Hamburg's town hall half an hour before the polls were closed known. With him, the State Council of the Senate Chancellery Volkmar Schön and the Senator for Culture Karin von Welck resigned. On August 25, 2010, the city council elected Christoph Ahlhaus as First Mayor. Von Beust later gave the reasons for the resignation, on the one hand, to have become thinner in office, to have increasingly scruples about unpopular decisions and worries about criticism and thus less strength and courage to fight things through. On the other hand, in a top office, from an outside perspective, it is quickly “used up” what is initially perceived as “charming, funny, original”. In the 2008 election, he also planned not to run again in 2012.

The Beusts term of office was also marked by privatizations . Although the population voted against it in a referendum, the majority of the Landesbetrieb Hospitals was sold to the private operator Asklepios , with a share of 25.1% remaining with the City of Hamburg. Around 30% of the port company HHLA was also listed on the stock exchange. Over 20% of the issue volume was acquired from private investors and employees, all of whom had a right of first refusal at a price discount of 50%. The ver.di trade unions and the red-green opposition criticized this process because they could only imagine issuing shares without voting rights, so-called people's shares . In this context there were briefly major demonstrations in Hamburg.

In 2002 von Beust gave the last 25.1% stake in the formerly state-owned electricity producer HEW for 869 million euros plus a special payment of 96 million euros to Vattenfall Europe with the words: “This is the best way for the city” . In 2007 he publicly regretted this (“Today I would no longer sell HEW”, as privatization means that “the city no longer has any influence on electricity prices and only has little influence on the company's investments”).