Friedrich Sthamer (born November 24, 1856 in Groß Weeden near Ratzeburg , † June 29, 1931 in Hamburg ) was a German lawyer . In the Weimar Republic he was First Mayor of Hamburg and German Ambassador in London .

The Sthamer family is one of the old Hamburg families. At the end of the 18th century Jürgen Nicolaus Sthamer moved to Hamburg and became senior in 1842 . His son, an uncle of Friedrich Sthamer, Eduard Sthamer (1803–1872), was a lawyer and from 1834 to 1860 a Hamburg senator . Friedrich Sthamer's father had founded a company in Havana . Having achieved prosperity, he acquired the Groß Weeden estate.

Sthamer attended the Kiel School of Academics . After graduating from high school, he began to study law at the Ruprecht-Karls-Universität Heidelberg . In 1876 he joined the Corps Vandalia Heidelberg . When he was inactive, he moved to the University of Leipzig and later to the Georg-August University of Göttingen . There doctorate he in 1878 to Dr. iur. 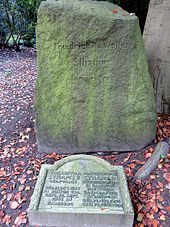 On January 1, 1879, he established himself as a lawyer in Hamburg. In 1892 Sthamer was elected to the board of the Hamburg Bar Association and in 1900 to the presidium of the high school authorities . From 1901 to 1904 Sthamer belonged to the Hamburg parliament and was elected to the Hamburg Senate on July 13, 1904 . He took a leave of absence in 1915 during the First World War and took over from his Senate colleague Justus Strandes as President of the Civil Administration of Antwerp, which was occupied by German troops . At the end of 1916 Max Schramm succeeded Sthamer, as Sthamer took over an office in the Reich and returned to Hamburg in 1917.

After the election of the first free and democratically elected citizenship on March 16, 1919, Sthamer was re-elected to the new Senate under Werner von Melle and Otto Stolten . On December 22, 1919 Sthamer was elected First Mayor . However, he stepped back already on 13 February 1920 to the day after the charge d'affaires of the German Embassy in London to be ordered. On August 27, 1920, he was appointed German ambassador in London. Arnold Diestel took over the office as Hamburg's first mayor , and Sthamer remained a member of the Senate until September 9, 1920.

Sthamer played a key role in negotiating the Locarno Treaties and signed them in London in December 1925. In September 1930 Sthamer was retired , his successor as German ambassador was Konstantin Freiherr von Neurath .

Friedrich Sthamer was buried in the Sthamer / Karlowa family grave, Ohlsdorf cemetery, southwest of Chapel 7. After gradual decline, most of the complex was cleared as part of the establishment of a new grave field.
Two streets in Hamburg were named after him: the Stahmerkai am Oderhafen, Hamburg-Steinwerder in the Hamburg-Mitte district , and the Sthamerstraße in Hamburg-Ohlstedt .