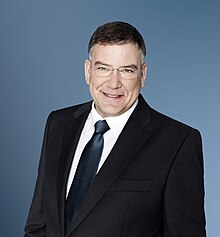 Christoph Ahlhaus grew up in Heidelberg . From 1988 to 1990 he completed an apprenticeship as a banker . From 1990 he studied law in Heidelberg , Berlin and Munich . In 1998 the traineeship followed, with a station at the German University of Administrative Sciences in Speyer . In 1999 he was admitted as a lawyer .

He has been married to Simone Ahlhaus, née Götz, since May 2006.

In the summer of 2014, Ahlhaus moved to Berlin with his family. There he works as a lawyer in a law firm.

In Hamburg, Ahlhaus and Thomas Schwinger-Caspari are on the board of DIP AG Deutsche Immobilien Projektentwicklung . In February 2018, it took part in the tender for the planned Elbtower project.

Politics in the CDU

Member of the Hamburg Senate

In April 2006, Mayor Ole von Beust appointed him to the State Council of the Ministry of the Interior . Ahlhaus replaced Udo Nagel on May 7, 2008 and became the Interior Senator of the Free and Hanseatic City of Hamburg.

Without having informed his party previously planned Ahlhaus in September 2009, the casino tax the Casino Hamburg to reduce from 90% to 50%. This would have enabled the casino to save around EUR 30 million in taxes by 2010. The spicy thing about this venture was considered to be the fact that John Jahr Jr. (Gruner & Jahr) as one of the bosses of the casino is also co-founder of the real estate company in which Ahlhaus' wife has been in charge of license marketing since January 2009.

The security measures to be paid by the state for his villa and a second home in Altona (costs: a total of 1.2 million euros) were viewed critically.

In the "company car affair", he had to make an additional payment of 59.40 euros for private car use.

Despite the tight budget situation in 2010, Ahlhaus succeeded in purchasing a new equestrian relay with an investment volume of approx. 600,000 euros and annual operating costs of 200,000 euros. Under his successor Michael Neumann (SPD), entertainment contracts are to be concluded by 2015.

Some people did not understand his wish to maintain the police orchestra with annual costs of 1.5 million euros despite cuts in the cultural department . His successor Scholz also sticks to this tradition.

First Mayor of the Free and Hanseatic City of Hamburg

On July 18, 2010, Beust announced that he would be relinquishing his post as First Mayor of Hamburg on August 25, 2010 in order to be able to devote more time to his private life. The Hamburg CDU state executive unanimously followed his recommendation to nominate Christoph Ahlhaus as his successor. The election of the first mayor by the black-green majority of the Senate was set for the first session of the citizenship after the parliamentary summer break on August 25, 2010. However, the coalition partner GAL initially reacted skeptically to the nomination of Christoph Ahlhaus. They called on the politician, known as a conservative hardliner, to follow Beust's liberal line and adhere to the coalition agreement. Ahlhaus then clearly stood behind the agreements negotiated between the CDU and GAL in 2008 and also declared his willingness to face the green basis in August 2010. After the meeting with the GAL base on August 18, both Ahlhaus and representatives of the GAL expressed their confidence that they would be able to continue the black-green coalition. On the other hand, some GAL members declared Ahlhaus to be ineligible because he was too far to the right. At a party congress, after a long debate, the GAL decided with a clear majority to continue the coalition under Ahlhaus. The Green Youth Hamburg called for the exit.

In the run-up to the planned election of Ahlhaus, his membership in the Ghibellinia gymnastics club in Heidelberg became public. This sparked anger at the GAL and leaders of the party questioned their faction's support for the election as first mayor. They asked Ahlhaus to clarify his relationship with the gymnastics community and criticized the fact that, from their point of view, nationalist tendencies and misogynistic principles existed in connections with the Coburg Convent. Ahlhaus stated that he had not had any contact with the Heidelberg gymnastics association for years. He had asked the chairman of the association not to list him as a member any longer.

The election of the First Mayor on August 25, 2010 came as a surprise despite the previous quarrels. In the first ballot, Christoph Ahlhaus received 70 yes votes, two more votes than the black-green coalition has elected. Thus, MPs from the opposition from the SPD and the Left also voted for Ahlhaus. 50 parliamentarians voted against him, one abstained.

New election and end of term

Only two months after Ahlhaus took office, the GAL parliamentary group, the GAL senators and the GAL state executive decided on November 28, 2010 to end the coalition, whereupon Ahlhaus dismissed the GAL senators and state councilors on November 29, 2010. Ahlhaus then led a CDU minority government . At a small party conference on December 7, 2010, he was unanimously chosen as the top candidate of the CDU for the election of the citizens on February 20, 2011. However, the opinion polls carried out in the run-up to the new election already revealed that there could be a change of power in the Senate and in the office of the First Mayor. The values ​​for both the CDU and Ahlhaus were well below those of the SPD and its top candidate Olaf Scholz .

In the new election of the citizenship on February 20, 2011, the CDU suffered a heavy defeat and only achieved 21.9 percent of the votes cast, which corresponds to a loss of 20.7 percentage points. This almost halved the share of the vote, and these were also the highest losses that the CDU has ever recorded in an election to a state parliament . In contrast, the SPD under Olaf Scholz achieved the absolute majority of mandates with 48.4 percent of the vote. With the election of Scholz as the new First Mayor of Hamburg in the constituent meeting of the citizenship on March 7, 2011, Christoph Ahlhaus's term of office ended after just over six months.

Resignation of the mandate

On November 5, 2014, Ahlhaus resigned from his citizenship mandate with effect from November 10. In doing so, he prematurely ended his participation in the Hamburg parliament, whose next election did not take place until February 15, 2015. Ahlhaus justified this step with his professional activity in Berlin.

Hamburg police and interior senators since 1950