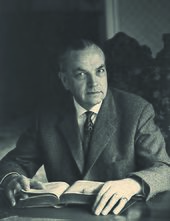 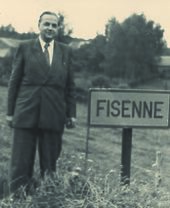 From Fisenne in his homeland

Josef Freiherr von Fisenne came from the Aachen branch of the aristocratic and wealthy Rhenish-Walloon family von Fisenne . The son of a pharmacist attended secondary school in Aachen, then completed a practical apprenticeship and studied pharmacy from 1923 to 1926 at the Friedrich Wilhelms University in Berlin . After obtaining his license to practice medicine in 1929, he initially worked as a pharmacist in Küstrin, Berlin and Hamburg for a few years and worked in the pharmaceutical industry from 1938 to 1944.

After the end of the Second World War , von Fisenne owned a pharmacy in Hamburg-St. Pauli , President of the re-established Hamburg Chamber of Pharmacists (1945–1951) and the German Pharmaceutical Society (1946–1953). In addition, he held a lectureship for law and history of pharmacy at the University of Hamburg , was editor of the "Pharmazeutische Nachrichten" and co-owner of the Govi publishing house .

After the end of the war, von Fisenne became a member of the CDU, whose Hamburg state chairman he was from 1954 to 1956.

In the Sieveking Senate , Fisenne was a Senator, initially without portfolio, from December 15, 1954 to December 31, 1955, Senator of the Building Authority , and from January 1 to March 29, 1956, Senator of the Police Department .

He resigned on March 29, 1956. The trigger was a personnel decision by Fisenne, which plunged the Hamburg block into its worst crisis. Fisenne had suspended the then head of the criminal police, the SPD member Carl Breuer , from duty because of alleged false expense reports and other allegations, for which Breuer was later expressly rehabilitated in court.

Hamburg police and interior senators since 1950

Hamburg Senators for Building and Urban Development since 1919

State chairwoman of the CDU Hamburg