Bucerius attended schools in Essen , Hanover and Hamburg. His father Walter Bucerius , mayor of Hanover from 1920–1922, moved to the management of Hugo Stinnes AG for shipping and overseas trade in 1922 . After graduating from high school in Hamburg in 1924, Gerd Bucerius studied law in Freiburg im Breisgau , Hamburg and Berlin . In 1928 he passed the first and in 1932 the second state examination in law .

Bucerius then worked as an unpaid judge in the then still Prussian Altona , in Kiel and Preetz and as a paid judge in Flensburg . From 1933 to the beginning of 1946, Bucerius worked as a lawyer in his father's office in Altona . In 1934 he received his doctorate as Dr. iur. at the University of Hamburg on the topic: The time of the loss of property in confiscated and liquidated goods, presented comparatively to the English, American and German right of confiscation of the world war. In 1937, Bucerius defended the Jewish Hamburg shipowner Arnold Bernstein as one of the first victims of the Aryanization against the First Public Prosecutor of Hamburg Heinrich Jauch .

In 1940, Bucerius was drafted into the Wehrmacht for only two months. From 1943 to 1945 he was deputy managing director and syndic of Diago-Werke Moeller & Co. in Hamburg. In the last years of the war this company was responsible for building barracks and emergency shelters and also used Jewish concentration camp inmates as forced laborers . However, Bucerius was also a family lawyer for the later politician Erik Blumenfeld . From mid-April 1945 he hid Blumenfeld in his house in Hamburg-Othmarschen and was recommended by him to the British after the end of the war.

On June 14, 1945, Bucerius was appointed trustee by the British military administration in Hamburg to handle the Hamburger Zeitung .

On February 14, 1946, together with Lovis H. Lorenz , Richard Tüngel and Ewald Schmidt di Simoni, he received the license to publish the weekly newspaper DIE ZEIT from the British occupation authorities . From 1949 to 1951 he gradually acquired the majority in Nannen- Verlag and thus also became the publisher of Stern .

In the years 1951 to 1957 under the found shareholders of TIME clashes take place, finally alone at the end Bucerius partner of TIME was. Until his death, Bucerius' great passion was TIME , which he financed with profits from the star . Against the opposition of the editors, he successfully implemented ZEIT magazine as the first color supplement in Germany. His professional relationship with the longstanding chief editor-in-chief Marion Gräfin Dönhoff was sometimes tense, as the correspondence shows.

On July 1, 1965, together with Richard Gruner and John Jahr senior, he founded Gruner + Jahr GmbH , the second largest German press company at the time. On January 1, 1973, he transferred his shares in Gruner + Jahr to the newly founded Bertelsmann AG and temporarily became its supervisory board chairman .

On December 15, 1971, Bucerius established the Zeit-Stiftung , which later became the sole heir to his fortune. The Foundation operates, among other things since 2000 Bucerius Law School , the first German private university for Law in Hamburg. In 2001 the Bucerius Institute for Research of Contemporary German History and Society at the University of Haifa and in 2002 the Bucerius Kunst Forum were opened by the Zeit Foundation. Since 2016, the ZEIT Foundation, together with the Norwegian Stiftelsen Fritt Ord, has been awarding three Free Media Awards each year for Eastern European media, each worth € 15,000.

In 1972 DIE ZEIT was separated from Bertelsmann AG and then the new Zeitverlag was founded. Diether Stolze headed the publishing house from 1977 to 1982 . From 1985, Bucerius' partner Hilde von Lang ran the publishing house together with Helmut Schmidt until 1990 . Helmut Schmidt was the publisher until his death in 2015 and has since been listed as the publisher in the imprint for an honorary sake. The film production company Die Zeit TV GmbH was founded in 1988 as a 55 percent subsidiary of Zeitverlag. DIE ZEIT and Zeitverlag have been part of the Holtzbrinck publishing group since July 1, 1996 . From 2009 49% of the shares in Zeitverlag are owned by Dieter von Holtzbrinck Medien GmbH (DvH Medien) and 51% by Georg von Holtzbrinck GmbH & Co KG Zeitverlag Beteiligungsgesellschaft .

From 1983 Bucerius was a member of the newly created Advisory Board of the Bertelsmann Foundation (from 1993 as an honorary member). Bertelsmann Patriarch Reinhard Mohn brought this into being in 1977 in order to secure his life's work.

Gerd Bucerius on an election poster for the 1st federal election on August 14, 1949 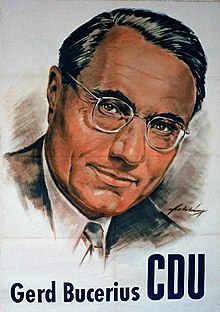 Gerd Bucerius on an election poster for the 1957 federal election

In 1946 Bucerius belonged to the Hamburg citizenship appointed by the occupying power . From February 26 to November 15, 1946, Bucerius was a non-party building senator for the Free and Hanseatic City of Hamburg . After the state elections in 1946 he was intended for the post of cultural senator in the event that the CDU participated in government, but this did not materialize. In 1946/47 he was a member of the Zone Advisory Council for the British Zone, and in 1948/49 a member of the Economic Council for the Bizone in Frankfurt am Main . In the economic council, he took over the chairmanship of the committee for burden sharing .

Bucerius joined the CDU on June 26, 1946 with a group led by Mayor Rudolf Petersen . From 1952 to 1957 he was federal commissioner for the promotion of Berlin's economy . He fell out with his role model Konrad Adenauer because of his Ostpolitik, especially his political behavior after the construction of the Berlin Wall in August 1961.

On February 8, 1962, he left the party after the so-called Hellfire Affair. The occasion was the article Is there really a fire in Hell? im Stern , which the CDU / CSU parliamentary group on February 7th disapproved of as "a violation of Christian sentiments".

Gerd Bucerius was elected to the German Bundestag for the first time in the constituency of Hamburg I in 1949 as a joint candidate for the CDU and FDP . In the first electoral term he was chairman of the Berlin committee, from November 10, 1954 to July 3, 1957 chairman of the committee of inquiry into the John case .

During a period of weakness in the Eastern Bloc in autumn 1956, he advocated using it and moving the German capital to Berlin. Shortly afterwards it was decided that the Federal President had a second official seat in Berlin and that the Bundestag should meet regularly in the restored Reichstag.

In 1953 he won the direct mandate in the constituency of Hamburg I again, after which he moved into parliament via the CDU state list. In March 1962 he resigned from his seat.

Special stamp for the 100th birthday of Gerd Bucerius

On the occasion of his 100th birthday on May 18, 2006, Deutsche Post AG issued a special postage stamp in 2006 and the cross street to the Speersort in Buceriusstraße, west of the Hamburg publishing house, was named.

His place of birth Hamm named the event hall in the communal education center (Heinrich-von-Kleist-Forum) Gerd-Bucerius-Saal .

Hamburg Senators for Building and Urban Development since 1919