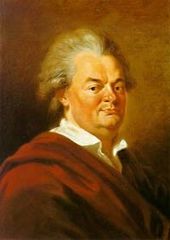 He achieved historical importance in particular through his sharply formulated socially critical writings, with which he publicly denounced the absolutist rule and its decadence in the then Duchy of Württemberg .

The Schubart school in Geislingen an der Steige, where Schubart taught from 1763 to 1769 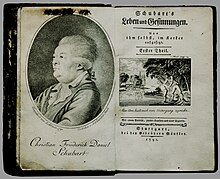 First print of Schubart's autobiography in 1791 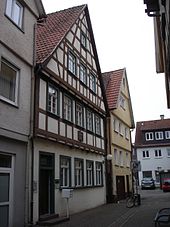 The Schubart house in Aalen. Schubart spent his childhood and youth here

The Schubart House in Ludwigsburg 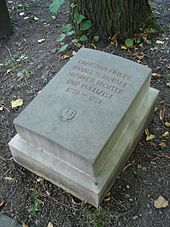 As the son of a parish vicar and teacher, Schubart first grew up in Aalen . He was then tutor to Johann Georg Blezinger in Königsbronn , with whom he became friends. From 1763 to 1769 he lived in Geislingen an der Steige . In 1769 he was appointed organist and music director at the Württemberg court in Ludwigsburg . He became a thorn in the side of the local nobility and clergy due to his casual way of life, his lack of respect and his sharp criticism of the aristocracy and clergy. After four years, Duke Carl Eugen was forced to expel him from the country.

In Augsburg in 1774 he began to publish the magazine Teutsche Chronik (first edition on March 31st), in which polemics were mainly against the Jesuits . When the Augsburg magistrate forbade the printing of the journal after a short time , it was continued in Ulm , where Schubart went in 1775 after he had been expelled from Augsburg.

Because he denounced the sale of Württemberg regional children for England's colonial wars and ridiculed Carl Eugen's mistress Franziska von Hohenheim as " light plaster that smells and smells", he was lured to Blaubeuren two years later with the help of an informer so that he could be arrested on Württemberg territory (see: Schubartstube ). When he was brought to the Asperg mountain fortress in February 1777 and thrown into dungeon, the duke and Franziska were present, because the two offended men did not want to miss this satisfaction.

For ten years Schubart was the victim of absolutistically motivated re-education measures . He was not allowed to receive any visitors in his tower dungeon, reading and writing was forbidden to him in the first few years. Despite numerous requests from many friends all over Germany who wrote poems about him and celebrated him (such as Johann Gottfried Herder ) as a freedom hero and martyr, he was only released by Carl Eugen in May 1787 - especially in view of Prussia's interference . In addition, he was even appointed music and theater director at the Herzogshof zu Stuttgart, where he continued to publish his magazine (under new titles).

With Schubart's death in 1791, the legend is associated that he was buried alive, which is said to have shaken Hölderlin and others very much. These rumors were collected and disseminated in 1849 by David Friedrich Strauss , the first Schubart biographer. In 1995, the playwright Heiner Müller even claimed that there was a "great fear of German poets since Schubart" that they would seem to be buried dead:

"When you cleared the cemetery much later, you discovered that the coffin was completely scratched on the inside, Schubart's coffin, that's macabre to be buried dead after twelve years in prison."

His grave is in the Hoppenlaufriedhof in Stuttgart.

In his lyrical work Schubart was connected to both the sensitivity of Klopstock and the folksong-like to pathetic representatives of Sturm und Drang . Thanks to his improvisational talent and his always open opinion, his popularity among the lower social classes rose very quickly. He even became a kind of mouthpiece for the oppressed because of his poetry accusing the rulers (such as Die Fürstengruft from 1783 or Kaplied from 1787) and through his work as a journalist. He never made a secret of his generally negative attitude towards despotic and obscurantistic behavior and thus became a model for younger poets like Schiller and Holderlin.

His treatise on the history of the human heart with the anecdote contained therein about two dissimilar brothers and the conflict with the father from 1775 served Schiller as an inspiration for The Robbers . Franz Schubert set his poem Die Forelle to music as an art song , which gained great fame when it was arranged as a trout quintet by Franz Schubert.

With his ideas for an aesthetic of music art (written during imprisonment, published posthumously in print in 1806) he created an important work in which he recorded a lot of information about the musical life of his time; including reports on various music centers and court bands.

When Schubart was in Heilbronn, he recorded his impressions:

“Since then, the impressions of Heilbronn have remained deeply rooted in my soul - of this beautiful sky that streams over its control room, towers and houses and of the good, free, cheerful, open people there who are tuned to the purest chords of joy and benevolence . If you have gold and want to live relaxed and well and beautiful in Germany, I would advise Heilbronn "

Monument in Aalen around 1892

Today, this replica is the main component of a modern sculpture by the Ellwang sculptor Rudolf Kurz .
The “Schubart stele” with a stainless steel look from 2011 consists of a frame and a base that carries the bust from 1950.