The Manegg Castle is the ruins of a hilltop castle at 623  m above sea level. M. on a side rib of the Albis ridge above Leimbach , a district of the city of Zurich .

Nothing is known about their builders. The castle was first mentioned in a document in 1303. It was then ancestral seat of the Manesse family for over a hundred years . It is not clear whether the gender derives the name from the castle or the castle bears the name of the family. The Manesse are mainly known from the Manessian manuscript . This collection of Middle High German songs was commissioned around 1300 by Rüdiger II (documented 1252–1304) and his son Johannes, treasurer of the Canon Monastery , the largest religious institution in Zurich.

The Manesse family were originally merchants and rose to knighthood because of their wealth. As feudal bearers of the Fraumünster Abbey , the Einsiedeln Monastery and the German Empire , they are an important city of Zurich family. Rüdiger I (mentioned in 1224, died 1253) had two sons: Johannes and Rüdiger II, the founder of the Manegg line and a councilor in Zurich for almost forty years. 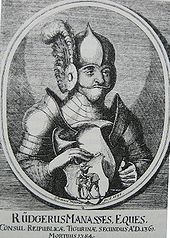 In 1393 Ital Maness sold the castle to the "Jew Visli or Vifli" at a public auction. His widow sold it to the Selnau monastery in 1400 for 35 Florener . Even at that time, the castle no longer seems to have been inhabited. In 1409 the castle fell victim to a fire. According to legend, this happened on Ash Wednesday when a carnival society carried out a playful siege. After the fire, large remains of the wall were preserved until the 17th century. Today only some of the foundations are visible.

Gottfried Keller has several residents of the castle appear in the Zurich novellas . The members of the Manesse family in Hadlaub , however, live mainly in the city. At the beginning of Der Narr auf Manegg , Keller describes how the family comes down. The rest of this novella is about Butz Fallätscher, an adventurer who ends up settling in the castle. The negligent arson by a masked carnival society is also described there. In the framework of the novellas , which takes place in the middle of the 19th century, an excursion to the ruins is described.

Manegg was still a popular excursion destination at the beginning of the 19th century. And even in Keller's days you could still enjoy a beautiful view of the lake and the city. Today the view is blocked by the forest. A poorly signposted footpath leads from the Sihl valley to the castle ruins and from there steeply up to the Albis ridge. On July 19, 1919, the Gottfried Keller memorial stone was placed on the former castle site for the 100th birthday.

At the turn of the last century, the historian Heinrich Zeller-Werdmüller described the original castle as being protected by a deep moat and on the other sides by the steep slopes. The castle site measured 35 × 9 meters. It was probably accessible through a wooden bridge towards the mountain. This led into a 8 × 5 meter kennel that was in front of the tower and ruled by him . The southern inner gate, leaning against the tower, led into the castle courtyard, 8 meters long and 9 meters wide. This separated the tower to the west from the palace facing east . This had an almost square floor plan of 12.6 × 10.5 meters. The tower, built from molasse blocks , with a floor plan area of ​​7.8 × 7.95 meters and a wall thickness of 2.28 meters, had a high entrance in the north corner of the east wall that was only accessible from the hall.

At the foot of the castle hill is the Manessebrunnen, which is reminiscent of Rüdiger von Manegg and his grandson who stood out in the battle of Dättwil against the Habsburgs in 1351 .

Castles and palaces in the canton of Zurich