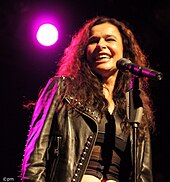 Julia Neigel at a concert in Bochum 2011

Julia Neigel is the youngest of five children in a Russian-German family and has one brother and three sisters. She was born in Barnaul, Siberia, and from 1969 spent two years in Tiraspol in Moldova . The family applied to leave Germany and moved to Ludwigshafen am Rhein in 1971 .

With the recorder, she won several youth music competitions until she decided to give up classical music. At the age of twelve she discovered pop and rock music. After a failed attempt in a punk band, she sang for the first time in a regionally known blues band at the age of 16. Soul music developed into her preferred style of music at this time.

In 1981 she was part of the squad of Südwest Ludwigshafen , which made it to the handball Bundesliga .

In 1984 she was awarded the Alfred Maul Memorial Medal of the State of Baden-Württemberg for her outstanding sporting achievements . She also moderated on radio stations.

In 1988 she achieved her national breakthrough with a record deal and the first album by the Jule Neigel band "Schatten an der Wand". The most successful album of their earlier releases with the Jule Neigel Band was the work "Herzlich Willkommen", released in 1994, which stayed in the top 10 for weeks. In the course of her career she has given more than 2000 concerts.

She has sold over 2 million albums so far. Your musical work spans many genres of pop and rock music as well as radio , R 'n' B . She is also referred to by the press as "The Voice" or the "Queen among German singers" and "Germany's most beautiful voice, which was often copied and never achieved". Peter Maffay titled Neigel in BILD in 2008 as "still the best German singer". In the preface to her biography, Udo Lindenberg describes her as an “extraterrestrial phenomenon” that has a “performance” that “knocks you over. Her voice, her mind, her fitness, all of these together make up Julia Neigel's total work of art ”.

The singer has a vocal range of more than 3 octaves.

In August 1989 she completed a tour through the GDR with the Jule Neigel Band as one of the few West German artists . The rock poet tour , organized in cooperation with West German ministries of culture and the GDR, was carried out together with Purple Schulz , Ulla Meinecke and Heinz Rudolf Kunze . The band toured through Karl-Marx-Stadt , Suhl and Weimar . The tour ended on August 22, 1989 in East Berlin - Weissensee with a concert in front of 120,000 people and a live broadcast on ARD . In 1990 Neigel took part in the sketch series Och Joh von Badesalz , in 1992 she had a guest appearance in the episode The New Suit of the Heinz Becker family television series . On April 25, 1991 the artist performed at a Jimi Hendrix Tribute concert with Simon Phillips and Jack Bruce for the Rockpalast on WDR . In the summer of 1995 she toured as the singer of the Jule Neigel Band at the sold-out festival series Rock over Germany initiated by Fritz Rau .

Neigel has been working as a producer, singer and author since 1987. In 1988 she was the first to receive the GEMA Text Prize, the Fred Jay Prize for outstanding achievements in text poetry. Among other things, she wrote the lyrics Freedom, which I mean , Do you see the sun and Do not give up love for Peter Maffay and also performed with him. She worked on her albums with musicians such as Simon Phillips, Paco de Lucía and Helmut Zerlett . She has received several awards, such as national best singer honors from Rolling Stone magazine and the specialist music magazine from 1989 to 1998.

In 2003 she was a member of the jury for the ZDF casting show The German Voice 2003 . On October 10, 2005, British artist David Knopfler released a duet with Julia Neigel called Tears Fall on his album Ship of Dreams .

In 2006 she released the live album Voice with Wings .

From January to May 2010 she performed live with Edo Zanki with the project Rock'n Soul Tour in double concerts. On the 20th anniversary of German unification (October 3, 2010) Julia Neigel performed together with Edo Zanki and Ulla Meinecke in front of over 100,000 spectators in front of the Brandenburg Gate in Berlin. In April 2011, Zanki released the song Let's be a miracle by Rio Reiser as a duet with Neigel on his album Too Many Angels .

On April 15, 2011 Neigel's album Neigelneu was released . In the same year she performed with the entertainer Ron Williams with a big band project. On March 29, 2011, on the talk show Kölner Treff , Neigel gave the legal disputes with her former band as well as a traumatizing incident of violence that she had experienced in 1995 as reasons for her long career break and her withdrawal from the public at that time. She explained that she is now cured, has freed herself from her previous band and is now fully practicing her job again. Since then she has been regularly on the German stages again with unplugged and rock programs and a new band. On December 2nd, 2011 Julia Neigel performed together with Peter Maffay , Udo Lindenberg , Silly and Clueso in Jena at the festival "Rock 'n' Roll in Jena - for a colorful republic of Germany" in front of 60,000 people.

In 2012 Neigel sang with Heinz Rudolf Kunze on his album Ich bin im Duett the title Mit Leib und Seele . In August 2012 the artist was a juror for the talent show “Simply the Best” at SWR . In October 2012, her biography was published in collaboration with Arno Köster under the name “Neigelnah - Freedom that I mean”, and the book was published on a reading trip. From October to December 2012 the singer toured Germany with Peter Maffay's musical Tabaluga and the Signs of the Times in the role of “Lady of the Camellias”.

Julia Neigel, like Wolfgang Niedecken and Toni Krahl , sang a duet with Dieter Birr , also known as machine, on his second solo album, released in 2014. At that time Birr was the singer of the Puhdys . The song "Regen" was released with a music video and was the first single on the album. In 2015 she went on tour again as a duet partner with Peter Maffay and the musical "Tabaluga-Es lebe die Freundes" and contributed as a singing partner "That's what friends are for" on the live CD. From January to March 2017 she accompanied Dieter Birr as a duet partner on his “New Beginner” tour. She toured Germany in 2018 with a project with Stefan Gwildis and the Big Band . In 2019 she performed with Dieter "Maschine" Birr at Lieder auf Banz .

In 2019 Julia Neigel went on tour with the band Silly and AnNa R.

Julia Neigel has been committed to social and charitable causes such as tolerance , humanity , for children and for victim protection , moral courage , Doctors Without Borders and against racism since the beginning of her career . On December 23, 1992 she performed together with Peter Maffay at the festival Heute die! Morning you! in front of the Festhalle in Frankfurt in front of 75,000 people.

On September 3, 2001 she took part in the charity concert People on the River for the financial rescue of the Elbe flood victims. In June 2007 she appeared in front of 25,000 people at the protest against the G8 summit in Rostock on the market square. In 2011, he was part of the SWR jury for Aktion Ehrensache , which honors voluntary social services.

She is on the board of trustees of the Association of German Rock & Pop Musicians , which awards the German Rock & Pop Prize , and is also on the jury for the Panik Prize , which is awarded to young talents by the Udo Lindenberg Foundation . Neigel is also part of the jury of the Christmas Song Contest at SWR Rhineland-Palatinate. In 2010, the singer was also active in the children's aid campaign Herzenssache .

For years she has supported the Peter Maffay Foundation for traumatized children at various events. Furthermore, she meets with Israeli, Palestinian and German children for an international exchange of understanding of different cultures. It is about overcoming conflicts through creativity.

For the Mannheim job center , Neigel recorded the self-written song Älter macht better on CD as part of the Starke50 initiative , part of the federal program Perspektive 50plus . She presented this song on December 20, 2012 at a concert for the long-term unemployed in the Mannheim Capitol . The aim of the initiative is to encourage people over 50 to find their way out of long-term unemployment.

For her social engagement in the fight against racism she received the Charlie Award of the Campus Symposium .

With the inclusion in the SIGNS OF FAME, among other things, her extraordinary social commitment is honored.

Process and commitment to copyright

There was a year-long legal battle between Neigel and former band members over the copyrights of numerous songs. While in an earlier trial in 2006 she achieved recognition of 75 percent co-authorship of the composition rights to her first hit Schatten auf den Wand by way of a settlement , she failed in 2012 before the Mannheim district court with the lawsuit for the re-registration of 66 more songs with GEMA and on Damages. You appealed against it. On November 9, 2016, the appeal at the Karlsruhe Higher Regional Court was dismissed. The Senate did not allow the revision. Neigel's complaint against the non-admission of the appeal was rejected by the Federal Court of Justice on May 17, 2018. On June 7, 2018, Neigel filed a complaint against this decision, which was rejected by the Federal Court of Justice on July 26, 2018.

Julia Neigel is committed to enforcing copyright claims, especially on the Internet. From June 2012 to July 2013 she was an honorary deputy member of the GEMA Supervisory Board . In an interview with the online magazine Giga.de, she commented on copyright law and GEMA and criticized internet companies such as YouTube and the Pirate Party .

Other compilations by
Jule Neigel Band: