Albisrieden is a district of the city of Zurich . The formerly independent municipality Albisrieden was incorporated in 1934 and is today along with Altstetten the Kreis 9 .

Albisrieden lies at the foot of the Uetliberg and had 22,113 inhabitants in 2017.

Despite the incorporation, the quarter has been able to retain its original character in the former town center. In the 1950s in particular, Albisrieden grew strongly due to enormous construction activity, but the population has also increased more recently than in other quarters of the city of Zurich, because old industrial buildings are being replaced by residential buildings.

A golden paw cross in blue

The paw cross expresses the historical ties with the Grossmünster Abbey . The jurisdiction of Albisrieden was under the monastery until 1526.

View of Albisrieden from the south, with the Zürichberg in the background

The first settlement was a Roman estate, which was later abandoned. Since the 9th century the settlement was owned by the great minster. In the Vogtlists from 1508 to 1512 the place appears as part of the Reichsvogtei Zurich . It was a basic rule of the provost Zurich, the plate image is accepted as a coat of arms. Zurich subordinated Albisrieden to the Upper Bailiwick of Wiedikon . After the upheaval of 1798 Albisrieden was assigned to the Zurich district, in 1803 to the Horgen district , then to the Oberamt and, from 1831, to the Zurich district .

In the past, the place was just called Rieden, as Rieden am Albis , to distinguish it from the villages of the same name near Wallisellen and Oberrieden .

The municipality within the Zurich district before the merger in 1933

In terms of church, the place was the only one on the left side of the Limmat under the pastoral care of the priests of the provost. Albisrieden already had its own chapel in 1270. The Grossmünster elected and paid the pastor until 1831 the collature passed to the community. Albisrieden was only raised to an independent parish by the government council resolution of July 18, 1866. The parish owned a considerable church property, from which it could support the poor during the famine years of 1771 and 1772 without government subsidies. Albisrieden was also not spared from military campaigns. The village was touched by the old Zurich War in 1443. But the Confederates moved from Hedingen via Albisrieden towards Zurich. In 1799 Albisrieden suffered under the occupation by the French.

The rapidly progressing development of the industrial colony adjoining the old rural Albisrieden gave rise to efforts in the 20th century to incorporate the community into the city of Zurich. The incorporation took place in 1934. 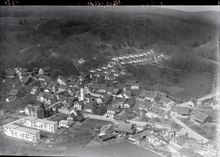 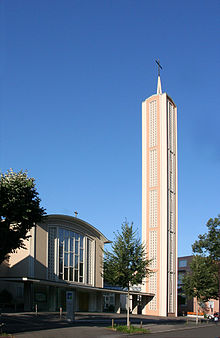 There are three churches in Albisrieden:

The Evangelical Reformed Church has two churches in Albisrieden:

The Roman Catholic Church is represented in Albisrieden with the parish of St. Konrad:

A number of small businesses are located in Albisrieden, as are industrial and service companies. Siemens Schweiz AG and Zürcher Freilager AG should certainly be mentioned .

A wide variety of associations are active in Albisrieden that help shape life. Many people in the quarter still have a very pronounced feeling of being more Albisrieder than Zurich. Certainly part of this thinking is the fact that people talk about Albisrieden about the village , but if you say city , then the city center of Zurich is meant, especially urban district 1 , and in part also urban districts 4 and  5 .

Due to the structural changes in the city, such as the density of road traffic or an increase in the number of inhabitants, the structures of the militia fire brigade of the city of Zurich were restructured in summer 2009. The tour has been adapted to the current situation and the new territorial division. In other words, the Höngg and Wipkingen quarters were added to Altstetten and Albisrieden. As a result of this amalgamation, Company 31 was formed into Company Limmattal. With this merger, a meaningful and targeted reorganization has been created, with which the efficiency of the units is strengthened, contemporary, simplified structures are created and in which the units can be deployed as required for the operational needs of Protection & Rescue.

There are also two Jewish cemeteries on Schützenrain in Albisrieden. The Agudas Achim cemetery opened in 1913 for the Orthodox Jewish synagogue of the same name, Agudas Achim, can be reached via Goldackerweg, while the Or Chadasch cemetery, opened in 1982 for the liberal Jewish community of the same name, can be reached via Schützenrain. The Agudas Achim cemetery has graves facing east, covered with gravel and framed with low straps, while the Or Chadasch cemetery is designed as a forest cemetery, the graves of which are covered with lawn and point down the valley.

The Albisrieden mill was mentioned as early as 1230. The mill wheel is still in use. The often rebuilt and expanded chapel from 1270 was replaced in 1818 by the newly built church by architect Hans Conrad Stadler. The Rapsölttrotte was owned by the Great Minster until the middle of the 18th century. In 1874 the trotters were removed. The color wood mill started operations in 1861 . She is a witness of the industrialization of Albisrieden. In 1888 the factory owner's house in the brick style was added to the factory buildings of that time.

In Albisrieden old farmhouses in multi-row frame construction, which were built around 1540, are still preserved: