Schwamendingen is an urban district of the city of Zurich .

The formerly independent municipality of Schwamendingen was incorporated in 1934 and forms today's District 12 . Administratively, Schwamendingen has been divided by the statistical office since 1971 into the three administrative units ("quarters") Schwamendingen Mitte , Saatlen and Hirzenbach . The city ​​districts 11 and 12 in the Glattal are often referred to together as Zurich North .

A Zurich guild that has existed since 1975 also bears this name.

The ploughshare indicates the former rural community of Schwamendingen, which was dominated by agriculture. The paw cross symbolizes the affiliation to the Grossmünster Abbey .

In the guild coat of arms , which is used at the Sechseläuten festival , the ploughshare and a wave pole representing the Glatt are depicted on a blue background. 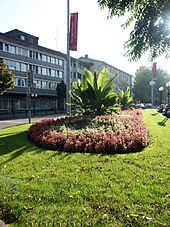 The name Schwamendingen goes back to an Alemannic settler named Swabmund , who settled on the site of the present-day town in the early Middle Ages . The place name means "with the people of Swabmund". A grave field found in the village dates from this time, from which some grave goods could be dated to the 6th century. In the 9th century a "Picho, son of Ertilo" bequeathed his possessions in the place, which at that time was still written as Swamundinga , to the Grossmünster in Zurich.

Initially, Schwamendingen was just a small hamlet, which , according to a rotulus from the Grossmünster, consisted of ten residential buildings in 915. A mention of the Schwamendinger Widum (church property ) can be found in a letter from the provost of Grossmünster to the Bishop of Constance in 1270.

When the city of Zurich took control of Schwamendingen in 1428, it formed its own upper bailiwick with some of the surrounding hamlets . In terms of feudal rights, however, the place still belonged to the Grossmünster, which donated a bell to the village church in 1461. In 1526, however, the Reformation found its way into Schwamendingen, Hans Schmid became the first Reformed pastor and the partial secularization ended the manorial rule of the Great Minster.

In 1554 the Kehlhof Schwamendingen was rebuilt. The new building stood on the foundations of the old building, which was mentioned in 929. During this time, roof tiles from Schwamendingen's production set themselves apart from the thatched roofs that had previously been used , which also shaped the architecture of the new Kehlhof. In addition to the brick kiln, another important line of business was the rental of horses and oxen as draft animals for the slope on the way to Zurich, where the village is located. For the first time, a reigning schoolmaster, Jakob Schön from Flums , is attested by name for the year 1624 .

Schwamendingen was touched by world history again in 1798 when a French army occupied the area around Zurich and made the population pay for billeting. The following year, the Second Battle of Zurich between the French soldiers and the Russian army took place near Schwamendingen . In 1831 the canton was democratized and the constitution recognized the people as the highest power in the state. Nevertheless, on August 29, 1841, more than 20,000 people from the entire canton demonstrated at the Schwamendinger brickworks against the government, which was perceived as too conservative. This event became known as "Beautiful August 29th".

In 1872 Oerlikon was separated from Schwamendingen, so that the two places now existed as independent communities. However, Schwamendingen was not fully affected by industrialization until late in the 20th century, as the Zurich – Winterthur railway line did not run through the town, but along the neighboring communities of Wallisellen and Oerlikon. Only in 1906 did a line of the electric tram from Zurich – Oerlikon – Seebach lead to “Hirschen” and in 1910 the electrification of Schwamendens began. 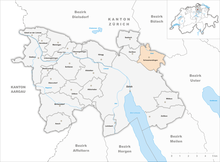 The municipality within the Zurich district before the merger in 1933

The formerly independent community of Schwamendingen was incorporated into Zurich on January 1, 1934 and originally formed the 11th district together with the former communities of Oerlikon , Seebach and Affoltern .

Due to the construction boom in the 1950s, the population rose relatively quickly from 3000 originally to 34,500 in 1966. This resulted in a revision of the city districts in 1971, on the occasion of which Schwamendingen was reallocated to its own, newly created district 12 and managed by the statistical office of the city of Zurich on the drawing board was divided into the three quarters Schwamendingen Mitte, Saatlen and Hirzenbach, which are only of statistical significance. Since then, the administrative division of the city of Zurich has remained unchanged from 1971.

There are currently around 32,500 residents in Schwamendingen. The proportion of foreigners is 37%, which is above the urban average of 30%. This may be related to the comparatively low apartment prices in the district.

Churches and places of worship

The Evangelical Reformed Church has three places of worship in Schwamendingen:

The Roman Catholic Church is represented in Schwamendingen with the parish of St. Gallus:

The Serbian Orthodox Church bought the former New Apostolic Church in Schwamendingen in 2006 and converted it into an Orthodox church from 2007, with the building being given a dome.

The Salvation Army Zurich-North owns a community center on Saatlenstrasse, which was built in the years 1997–1998 by the architectural office Jürg Bühler, Zurich.

The Church of Jesus Christ of Latter-day Saints , which the Mormons heard on autumn walk has an ecclesiastical center. These were created in the years 1965–1968 by the architect Hans B. Ringger, Basel. The center was inaugurated on May 5, 1968 by the 13th President of the Church, Ezra Taft Benson .

Schwamendingen is crossed by the A1 motorway , on which up to 120,000 cars and trucks travel every day. After decades of efforts, the parliaments of the city, canton and federal government approved the loans in 2006 and the additional loans that became necessary in 2011 for a 900 m long enclosure of the motorway . The federal government, the canton and the city will together contribute 295 million francs to the project, which will be inaugurated around 2024.

In the east of Schwamendingen, on the border with the neighboring municipality of Dübendorf , is the Stettbach train station . Various S-Bahn lines lead from here to Zurich city center, to Winterthur and other parts of the Canton of Zurich. Since the opening of the third and, for the time being, last construction phase of the Glattalbahn , its new line 12 has connected the Stettbach station via Dübendorf, Wallisellen and Opfikon with Zurich Airport .

Since autumn 2003 Schwamendingen has been burdened by the southern approaches to Zurich Airport.

For 1939 was Grand Prix in Switzerland as part of the motorcycle championship long on a less than five kilometers, provided new track in Schwamendingen. However, the race was canceled due to the outbreak of World War II .

The football club FC Schwamendingen was founded in 1952. The club comprises 22 teams, which are distributed from juniors to veterans . The 1st team plays in the 3rd division .

All Zurich baseball clubs (Challengers, Barracudas, Lions) play their home games on the Heerenschürli sports field, which has been the first Swiss baseball field with the original dimensions since the renovation in 2010.

Memorial plaque at the Heinrich Bosshardt schoolhouse in Schwamendingen