This article describes the district of Zurich. Further meanings under Oerlikon (disambiguation) .

The Zurich city quarter of Oerlikon has undergone a major change in the past few decades from an industrial quarter to a very upgraded district with modern living spaces and offices for global and well-known companies.

Blazon : In red over a downwardly curved silver horseshoe a fallen silver ploughshare.

The ploughshare indicates that it previously belonged to the Schwamendingen community . The horseshoe symbolizes the importance of Oerlikon on the trade route to Zurich. Here the horses were shod before the ascent to the Milchbuck .

The name Oerlikon goes back to Orilo , the Alemannic founder of the settlement . Oerlikon was first mentioned in 946 (other source: 942) as Orlinchowa .

In modern times the place had a little more than a dozen houses and was part of the community of Schwamendingen . The residents of Oerlikon also visited the school and church there. In 1855, the Nordostbahn (NOB) opened the main line Romanshorn – Winterthur – Oerlikon, which was extended to Zurich in 1856 and connects southern Germany with Zurich. This made Oerlikon interesting for industry and trade, which gave Oerlikon very rapid growth. In 1872 Oerlikon broke away from Schwamendingen and became an independent municipality . On this occasion, the Oerlikon cemetery was built in 1876 , which was placed under monument protection in 2004 as a characteristic cemetery of the 19th century. The Maschinenfabrik Oerlikon (MFO), founded in 1876 , settled north of the railway line and had a significant impact on the community. In 1897 the private Zurich – Oerlikon – Seebach (ZOS) tram was built. Branch lines also led to Schwamendingen and Opfikon . The tram line was built and largely financed by MFO.

Oerlikon developed independently of Zurich, only in 1934 was Oerlikon - together with Seebach , Affoltern , Schwamendingen , Witikon , Höngg , Altstetten and Albisrieden - incorporated into Zurich.

Oerlikon, which in the past was primarily an industrial area, is now one of the fastest growing districts in Zurich.

Oerlikon hit the headlines in 1932 (see Oerlikon railway accident ), 1992 and 2003 due to train accidents at Oerlikon station . The accident in 1992 made clear that the Oerlikon junction was being burdened by the Zurich S-Bahn and led to the procurement of the ZUB 121 train control system from the Swiss Federal Railways .

Oerlikon on an aerial photograph by Walter Mittelholzer , at the lower edge of the picture the Oerlikon train station with the MFO site (before 1920)

View over the park area of ​​the MFO Park on Oerlikon, on the left the Swissôtel , in the center of the picture the Neumarkt , in the background the Zürichberg

South of the railway line is the center of Oerlikon with the Neumarkt and züri 11 shopping centers , the striking high-rise building of the Swissôtel hotel and the market square, where a grocery market takes place on Wednesdays and Saturdays in the mornings.

To the north of the train station, the new Neu-Oerlikon quarter (formerly Zurich North Center ) is being built. New living space is being created in the former industrial quarter. The very urban-looking architecture is loosened up by spacious parks . In the past few years, four new parks, which are highly regarded by experts, have been created: The Oerliker Park with its observation tower, designed by the landscape architects Zulauf + Partner, the MFO Park by the architects Burckhardt and Partner, on the area of ​​the former machine factory Oerlikon, the Wahlenpark by the artist and architect Christopher T. Hunziker and Dipol and the Louis-Häfliger-Park . The Gustav-Ammann-Park was in 1942 designed by the landscape architect Gustav Ammann of created a so-called welfare garden and even after more than 50 years, a tranquil oasis of calm. Another shopping center was also built; the Center Eleven built. This is very centrally located in the quarter.

Along Regensbergstrasse there are several, partly monumental, primary school buildings (Gubel, Privet, Halde), to the south of which is the extensive Allenmoos garden district with buildings from the entire 20th century.

Maschinenfabrik Oerlikon (MFO), founded in 1876, was the first large industrial company in Oerlikon. It was taken over in 1967 by Brown, Boveri & Cie , which in 1988 became ABB , whose headquarters are in Oerlikon.

The Oerlikon armaments company , which was outsourced from MFO in 1906 , became the Oerlikon-Bührle armaments group , which was massively restructured in the 1990s. The conglomerate became the technology holding company Unaxis , which is now called OC Oerlikon Corporation and whose subsidiaries are still partly located in Oerlikon and Seebach , with the sale of various holdings and company branches . The Oerlikon Contraves AG , a former Rheinmetall Air Defense subsidiary continues to reside in Oerlikon, the same applies to the Allreal Generalunternehmung AG , the former Rheinmetall Air Defense AG Real Estate.

PricewaterhouseCoopers , among others, is now based on the former MFO site . Another global company whose Swiss headquarters are in Oerlikon is Bombardier Transportation , whose global locomotive and traction development center is located on the still active ABB site ( Toro 1 ).

The Hallenstadion , the Oerlikon Open Race Track and the former Züspa exhibition grounds, which have been combined in the Exhibition Center of Messe Zürich since 1998, are located in Oerlikon .

The train station Zurich Oerlikon is one of the ten largest railway stations in Switzerland. It is also an important hub in the Zurich S-Bahn network and also offers connections to national long-distance transport. It forms a bottleneck for train traffic. This was at least partially remedied with the construction of the second through station ( Löwenstrasse project ) and the Weinberg tunnel. The station has been massively expanded since 2016; he has his own shopping mall. 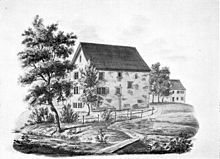 The following churches and religious communities can be found in the Oerlikon district :

Chapel at the Oerlikon cemetery

Oerlikon is an important center in the education sector. There is a canton school in the quarter, the canton school Zurich North (KZN), which was created in 2012 from the merger of the canton schools Oerlikon and Zurich Birch. In addition, the University of Zurich is increasingly outsourcing individual teaching and research facilities from the center to Oerlikon. The institutes for sociology, ethnology, psychology, computer science and computational linguistics are located at the University of North. On the opposite side of the station, in the Cityport, is the Institute for Political Science.

The cantonal center for career guidance is also located in Oerlikon.

After a year and a half of redesigning the former Stadthof 11 , Theater 11, which has won many architecture prizes, has existed since December 2006 . The venue, located next to the Zurich Exhibition Center and the Hallenstadion, has 1,500 seats.