Affoltern is a district of the city of Zurich . The formerly independent municipality Affoltern was incorporated in 1934 and is today together with Oerlikon and Seebach the circuit 11 .

Affoltern is separated from the city center by the Käferberg . It is mostly a residential area.

Split by gold and red, on the right a green apple branch with three red fruits, on the left in the head of the shield a gold star.

The coat of arms indicates the place name with the apple branch. The gold star refers to the Wettingen monastery , which owned land and had tithing rights in the community . 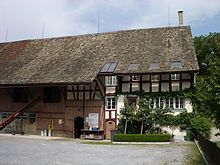 Farm in Unteraffoltern, built in 1671 instead of a previous building

The first mention comes from the time after 831. In a list of the St. Gallen monastery with interest people from the Wehntal ( Censores de Uaninctale ) an Alemanne von Affoltern ( de Afaltraha ) is mentioned with a fee of five solidi. The first clearly datable mention is from 870. In Afaltraha and his later responses to today's quarters is the precursor upper and lower village . In the 11th century the area was adapted by the barons of Regensberg , who lived in the ancestral castle of Alt-Regensberg . The sex disappeared after a few generations and with it the importance of most of the goods in the Furttal - including those in Affoltern. Affoltern belonged to the parish of Höngg until the 17th century, then to Dielsdorf for a short time and finally to Bülach until the 19th century. In 1934 Affoltern was incorporated together with the communities of Albisrieden , Altstetten , Höngg , Seebach , Oerlikon , Schwamendingen and Witikon .

The municipality of Affoltern near Zurich and seven other independent municipalities became part of the city of Zurich in 1934. Together with the other Glattal communities of Oerlikon , Seebach and Schwamendingen , Affoltern was divided into the new urban district 11 , with Schwamendingen being reallocated to its own, newly created district 12 on the occasion of a revision of the urban districts in 1971.

View from the upper Katzensee , in the background the ETH-Hönggerberg

In 1941 the Affoltern district still had a manageable 3,000 inhabitants. Until the beginning of the 1950s, the quarter was hardly noticed. Then came the first big building boom, where, among other things, the third district of Neu-Affoltern was built alongside the existing districts of Ober- and Unter-Affoltern. Apartments for more than 10,000 new residents were built in just 10 years. The number of inhabitants then stagnated for 40 years until 2002 at around 18,000. At the beginning of the 21st century, the city of Zurich experienced a housing shortage that continues to this day, which triggered a second major construction boom. This time mainly the exposed land from Zehntenhausplatz / In Boden to Holzerhurd and the Chatzensee recreation area was re-zoned and spacious, modern and family-friendly. There were also new streets, avenues and parks. The quarter had more than 24,000 inhabitants at the end of 2009, but the development of the areas is not yet complete in 2010 either. Affoltern is thus the most populous district in Zurich-North and, after Altstetten, the entire city of Zurich. Affoltern has been the city district with the highest annual population growth for eight years. At the end of 2018, Affoltern had around 26,500 inhabitants. According to forecasts by the city of Zurich, the population is expected to grow by 18% to 31,000 by 2035.

The area around Zehntenhausplatz / "In Boden" with its boutiques, some restaurants and inns, small shopping centers and other shops is more urban. This contrasts the old village center with its timber-framed buildings and farms. Beyond the motorway bridges is a nature reserve with three small lakes and a lido. The local recreation area is popular with those seeking relaxation from the city center on nice days and also in winter when the lakes are frozen over. Mainly young families with children live in Affoltern, who are looking for a quiet environment but still want to fall back on a good infrastructure.

Affoltern's image is shaped by its many new apartments. Most were designed in a flat roof design. Developments such as N-Joy [Quarters Ober- and Unter-Affoltern the third quarter] or Wolfswinkel received national interest among architects for modern urban construction. Most of the buildings were built to the minergy standard with heat pumps and solar cells. Sustainability was a top priority in the design.

Affoltern has an S-Bahn station, which is served by S-Bahn line 6. Line 6 runs every 30 minutes from Uetikon to Baden via Stadelhofen, Hauptbahnhof and Oerlikon. Since December 2016, the new S-Bahn line 21 [3] has been running in the evening from the main station via Oerlikon to Affoltern and in the opposite direction in the morning. This guarantees a 15-minute cycle during rush hour.

In addition, Affoltern is served via the Wehntalerstrasse with the trolleybus route 32 and the bus route 61/62. Line 32 runs every five minutes (morning / evening, otherwise 7/8 minutes) via Bucheggplatz to Limmatplatz ( Langstrasse ) to the road traffic office. Lines 61/62 connect Affoltern with Oerlikon and Schwamendingen. The buses run every six minutes (from Affoltern train station) and every twelve minutes to Unteraffoltern or to the Ruggächern development area (final stop Mühlacker). From the Glaubtenstrasse station, the Altstetten and Neu-Oerlikon districts are served every five minutes by line 80, and the Seebach and Bucheggplatz districts by line 40. Line 37 also leaves from Affoltern station and goes directly to ETH Science City on the Hönggerberg.

The bus line N1 of the Zurich night network ZVV connects Affoltern with the city center on weekends every 30 minutes.

Affoltern is to receive a tram into the city via Bucheggplatz in 2027 at the earliest. Tram line 11 will be extended to Holzerhurd. If necessary, the “Nordtangente” tram line will later run from Affoltern via Oerlikon to Schwamendingen. 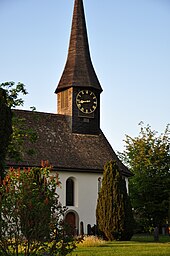 The following churches and places of worship are located in Affoltern:

The Evangelical Reformed Church has two churches in Affoltern:

Two parishes are responsible for the Roman Catholic residents of Affoltern:

The New Apostolic Church has a church at Zehntenhausstrasse 12. The original church, built between 1964 and 1965, was demolished in 2015 and a new church was built. This was inaugurated in 2017.