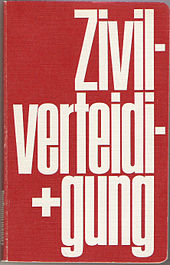 The Civil Defense Book was a guidebook published by the Swiss Federal Council as part of intellectual national defense on the civil protection of the country in order to strengthen the resistance of the people and to secure the independence of Switzerland. The book was distributed free of charge to all households in Switzerland in September 1969 by the Federal Department of Justice and Police on behalf of the Federal Council.

The civil defense book was planned in the early 1960s as an educational contribution for the federal authorities against the dangers of nuclear weapons , but then developed into a comprehensive guide on civil defense. Its purpose - according to accompanying letter - was to show the population what precautions the private, the family, to protect them and to contribute to the civil defense can meet and should take time in the eye , so that when but unlikely event of a disaster occur, ready and are equipped and know how to behave . The book, together with the soldiers' book given to all soldiers , was intended to help secure the independence of Switzerland.

The foreword was written by the head of the Federal Department of Justice and Police, Ludwig von Moos .

The book is divided into the main chronological chapters Peace, Danger of War, War, The Second Form of War, Resistance . You close up leaflets on.

The chapter on peace is based on the Swiss model of defensible values ​​such as freedom in the community, the peaceful state, and freedom of conscience . A large area is devoted to preparedness in the event of war: preparedness for defense, stockpiling , organization of civil defense, warning service, protective measures against nuclear, biological and chemical weapons, help for the homeless, fire fighting, medical service and spiritual national defense .

The measures to be taken if there is a risk of war are described in detail: fuel and food quotas, combined civil defense exercises, military readiness, partial and war mobilization, food bans, props, sabotage and espionage , death penalty, rationing , radiation protection , internees and refugees, etc.

As the second form of war camouflaged war action of the opponent are referred to with the aim of inner circulation or a Revolutionary War: Revealing parties Defaitismus and Pazifismus , sympathy and intimidation propaganda, economic war , Revolutionary fight apparatus, flow of a Revolutionary War, attrition and subversion , disorganization political life, terror, foreign policy pressure, coup d'état .

When the Civil Defense Book was published in 1969, the population had vivid memories of the invasion of the Warsaw Pact troops in August 1968, which put an end to the Prague Spring . At that time it was feared that Soviet troops could invade Switzerland via neutral Austria. The threat scenarios in the civil defense book were considered quite realistic in this context.

Various circles strongly criticized the civil defense book because it portrayed groups such as trade unionists, intellectuals, Italians and even chess players as potential traitors. At the Swiss Writers' Association (SSV), the Olten group was secessionized in 1970 because the SSV president, Maurice Zermatten , had obtained the French translation of the civil defense book. In their opinion, the book had an anti-communist tendency, which would mark all left intellectuals as traitors .

Due to the sharp left-wing criticism of the book, official Switzerland said goodbye to the national spiritual defense .

The opening of the archives in East and West allows for the first time a historical assessment of the civil defense book as a countermeasure by the Federal Council to ward off Eastern espionage. With regard to the realism of the various threat scenarios in the civil defense book, the following picture emerges from the files:

Based on the current state of knowledge and the numerous new official files available in Berlin and Bern, we can soberly state that all the dangers and subversive activities of the psychological war by the communist states in Switzerland during the Cold War described in the "Civil Defense Book" were real, with the exception of the coup d'état and intervention, which however clearly took place in East Berlin, Budapest, Prague and during the Cuba crisis and which had massively threatened world peace .

The book was written and designed by Colonel Albert Bachmann and Georges Grosjean .

The civil defense book aroused interest in numerous foreign countries and has been fully or partially translated into various languages: it was also published in Chinese, Japanese and Arabic. The Swiss cross was also partially taken over.