The yew family (Taxaceae) form a plant family in the order of the conifers (Coniferales). Some species are used as ornamental plants in parks and gardens around the world .

The most famous representative of the family in Central Europe is the European yew ( Taxus baccata ), which is also planted in parks or gardens. The vegetative parts of the plant and its seeds are very poisonous. The aril, however, is non-toxic and can be eaten. A doctor should be consulted after eating several “berries” including seeds. The poison is called taxine , it contains, among other things, the diterpene taxol .

There are evergreen trees and bushes . Most of them do not contain resin and do not smell aromatic. The bark is scaly or fibrous. With the exception of amentotaxus , the leaves are alternate or spiral, but often appear to be two-line, arranged on the branches and remain there for several years. The needle-shaped leaves are flattened. The seedlings have two seed leaves ( cotyledons ).

The species of the Taxaceae are sexually separated: monoecious ( monoecious ), but mostly dioecious ( dioecious ). The male cone-shaped flowers are axillary singly or in groups on annual twigs; they are spherical to ovoid. The sporophylls have two to twelve microsporangia (pollen sacs). The spherical pollen are not winged. The pollen is spread by the wind. The axillary female cones on annual twigs are reduced to a single cone scale with one or two ovules .

Only one seed is formed per cone. The seed has a hard seed coat and is partially or completely ( torreya ) surrounded by a seed coat ( arillus ) (a fleshy shell that looks somewhat like a berry) when it ripens . The aril can be intensely colored and juicy, fleshy or leathery. Birds ( ornithochore ) are particularly attracted by the color and taste of the aril. The aril is usually eaten with the seeds hidden in it and the seeds are then excreted undigested. 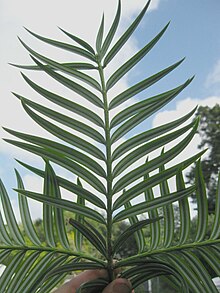 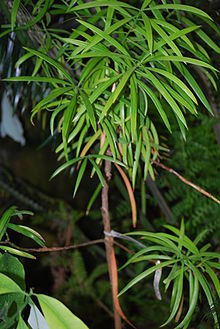 The genera of the yew family occur mainly in the northern hemisphere . The distribution area extends south to the Philippines and Mexico and with the species Austrotaxus spicata in New Caledonia also to the southern hemisphere . In China there are four genera with eleven species.

The Taxaceae family comprises five genera with a total of 17 to 20 species . A distinction is made between two tribes; among other things due to the morphology of the aril:

The separation of Austrotaxus (Austrotaxaceae Nakai ex Takht. & Reveal ), Amentotaxus (Amentotaxaceae Kudô & Yamam. ) And Torreya (Torreyaceae Nakai ) as separate families has not prevailed. The scope of the two families Yews and cephalotaxus plants (Cephalotaxaceae) is discussed. There are also authors in which both families contain three genres each. Also a merger of both families with then six genera in the Taxaceae s. l. was up for discussion. However, a phylogenetic examination confirms the inner systematics of the yew family and the status of the head yew described here, illustrated by the following cladogram :