Apollo 12 was the sixth manned mission and the second manned moon landing in the Apollo program .

On April 10, 1969, shortly after the successful flight of Apollo 9 , NASA announced, as expected, the replacement crew from Apollo 9 as crew for the flight Apollo 12: Pete Conrad was nominated as commander , the Gemini 5 and Gemini 11 already two Had space flights behind. The pilot of the command module was Richard Gordon , who had already flown with Gemini 11 under Conrad. The pilot of the lunar module was the space novice Alan Bean , the last astronaut of the third selection group, who was still waiting for his mission.

The backup crew was led by David Scott , who had just completed his second space flight on Apollo 9. Alfred Worden was assigned to pilot the command module and James Irwin to pilot the lunar module . The support crew consisted of Gerald Carr , who was already on the Apollo 8 support crew, Paul Weitz, and Ed Gibson , a fourth-selection science astronaut. The substitute team, the support crew and the astronaut Don Lind worked as liaison spokespersons ( Capcom ) .

The Apollo crews were not put together just before the crews were announced, but they had worked together for years. Long before the first manned Apollo flight, six teams were put together in 1967 to carry out the first flights. Conrad, Gordon, and Bean were to serve as backup crews for Mission E , a test of the command module and lander combination in a remote orbit. In November 1967 they were assigned to Mission D as a substitute team; this would be the first manned test of the lunar module. Conrad's crew thus had a good chance of becoming the main team of Mission G , where the first manned moon landing was to be attempted, because usually a replacement team could become the main team three flights later.

In the summer of 1968, however, delays in the project became apparent, so that rescheduling had to be made. Mission E was canceled and the crew was deployed on a previously unplanned flight to the moon ( Apollo 8 ). As a result, their replacement team around Neil Armstrong moved to the place of the main team of Mission G, which then actually carried out the first moon landing with Apollo 11 . Mission D became Apollo 9, so Conrad, Gordon and Bean were assigned the first H mission, numbered Apollo 12 .

The individual stages of the Saturn V rocket AS-507 were delivered to the Kennedy Space Center between March and May 1969 . The Apollo spacecraft CSM-108 was named Yankee Clipper , the lunar module LM-6 was named Intrepid ( intrepid / fearless ).

The Apollo 12 mission badge shows a sailing ship (clipper) indicating that all three astronauts are from the US Navy . Four stars can be seen in the background, symbolizing the three crew members, as well as the astronaut Clifton Williams , who was intended to be a lunar shuttle pilot but died in a plane crash on October 5, 1967 and was replaced by Alan Bean.

On September 8, 1969, the rocket was rolled to launch pad 39A. Two days before the launch, a leak was discovered in the tank of the Apollo spacecraft. The tank was removed and replaced with a copy of Apollo 13.

Apollo 12 took off on November 14, 1969 at 16:22 UT during a thunderstorm. The spacecraft was struck by lightning strikes twice during launch . The impacts 36.5 and 52 seconds after take-off were probably caused by the rocket's exhaust jet, an electrically conductive channel made of ionized gas. The result was the temporary failure of most of the electrical systems in the Apollo spacecraft, which, however, could easily be reactivated in orbit . Except for the loss of nine insignificant telemetry sensors , the start went according to plan. After a check-out, the S-IVB stage was successfully ignited for the three and a half day flight to the moon.

After the separation of the Apollo spacecraft and the lunar module, the S-IVB stage should be brought into a solar orbit as before with Apollo 8, 10 and 11. However, the required drive maneuver was too imprecise, so that the stage after passing the moon was too slow to be permanently released from the gravitational field of the earth-moon system. When it was rediscovered in 2002, the S-IVB stage of the Apollo 12 mission was mistaken for an asteroid that was given the designation J002E3 .

Earlier than planned, Conrad and Bean got through the tunnel into the lunar module and examined whether the lightning strikes had caused damage to Intrepid when it took off. 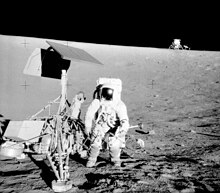 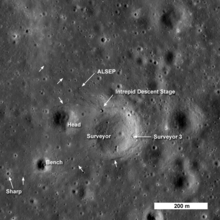 LRO image of the landing site of Apollo 12 (NASA)

For Apollo 12, a landing location was set at 3 degrees 11 minutes and 51 seconds south latitude and 23 degrees 23 minutes and 8 seconds west longitude in Oceanus Procellarum . The landing site was chosen so that it was possible to remove parts of the space probe Surveyor 3, which landed on the moon on April 20, 1967, and then to bring them back to earth. Conrad and Bean landed the lunar module on November 19, 1969 at 06:54 UT, only 163 meters away from this probe.

Conrad could see the Apollo spacecraft with his naked eye as it flew over the landing site on the next orbit around the moon. Gordon also spotted both Surveyor 3 and Intrepid from the mothership during the following orbit. The distance was about 110 km.

Apollo 12 also transported a color TV camera for the first time, but Bean pointed it directly at the sun when it was set up. This immediately destroyed the camera's image pickup tube and made TV broadcasts impossible from the start of the mission.

Conrad and Bean set up the new ALSEP experiment module about 200 meters away. The seismometer was so sensitive that it already registered the step vibrations of the returning astronauts and radioed it back to earth. The scope also included a magnetometer and the solar wind experiment carried out on Apollo 11.

After resting in the lander, the astronauts went to the Surveyor probe, from which they removed parts and brought them back to Earth.

Conrad and Bean started the lunar module's ascent stage and let the engine run for over seven minutes. The stay on the moon had lasted 31 hours, 31 minutes and 11 seconds, of which the astronauts had spent a total of almost eight hours outside the lunar module. In addition to the equipment that was no longer needed, the astronauts inadvertently left several magazines with exposed films, including all color photos from the second EVA.

Several course corrections were necessary before Intrepid could dock with Yankee Clipper. After changing trains, the lunar module was uncoupled and put on a targeted collision course with the moon. Intrepid hit about 45 miles from the seismometer at about 1.5 km / s. The data of the following moonquake were transmitted directly to the earth by the ALSEP.

Apollo 12 stayed in lunar orbit for another full day to supplement photographic mapping of the moon.

The command module Yankee Clipper watered down on November 24, 1969 at 20:58 UT, 10 days, 4 hours, 36 minutes and 24 seconds after take-off. The impact was relatively hard and Alan Bean was hit by a falling camera. He suffered a concussion and a laceration over one eyebrow. Like Apollo 11, the landing capsule was first tip down, but soon straightened up.

The biological precautions were the same as for Apollo 11: the astronauts were placed in a quarantine container on board the aircraft carrier USS Hornet . Five days later, the astronauts and their containers were flown from Hawaii to Houston , where they were released from quarantine after a total of 16 days.

During the laboratory examination of the camera of the Surveyor-3 probe, the microbiologist Frederick Mitchell reported that dried bacteria ( Streptococcus mitis ) had traveled to the moon in the isolation of the camera . The bacteria were able to germinate again in the incubator and were therefore considered an indication of possible survivability in space (see panspermia ). However, it later emerged that inadequate sterility precautions had been taken and that the bacteria found probably came from contamination in the laboratory.

The Apollo 12 command module is located at the Virginia Air and Space Center in Hampton, VA .

Significance for the Apollo program

With Apollo 12, an almost fully automatic precision landing was achieved for the first time. With the ALSEP package, valuable scientific data could also be received at later times. Overall, the Apollo 12 mission went so smoothly that a more difficult target could be set for Apollo 13 : a landing in the Fra Mauro highlands.