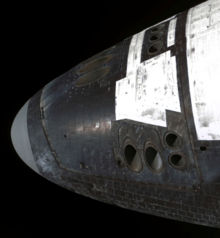 RCS engines in the nose of the space shuttle

The Reaction Control System  ( RCS ) is used to control a spacecraft outside the dense atmosphere with attitude control thrusters , since aerodynamic control surfaces , as used in aircraft for attitude control, are ineffective here. It enables the spacecraft to be aligned along all three axes in space.

Since only the inertia of the spacecraft has to be overcome for control in orbit , only low control forces are required compared to atmospheric flight . An orbiter is controlled by the RCS through short, jerky ignitions that give the spacecraft an impulse in the opposite direction of the gas expelled by the RCS ( recoil principle ).

The movement initiated in this way is terminated by a counter pulse when the desired position is reached. This brake ignition must exert exactly the same acceleration on the spacecraft as the first, but in the opposite direction. Each change in position therefore requires at least two ignitions of the position control nozzles.

For complete position control on the Space Shuttle , the Reaction Control System is supplemented by the Orbital Maneuvering System (OMS), which enables the orbit height to be changed. The overall system enables the alignment and movement of the space shuttle along all three axes in space.

The Space Shuttle-RCS consists of 44  rocket engines of different thrust , which are grouped into three groups:

In addition to the 38 main units, which have a thrust of 3.9 kilograms newtons , there are six smaller nozzles (two per RCS group) with 106.8 newtons of thrust. These are used for fine control.

Similar systems were tried in early US Air Force X programs . The North American X-15 already had a working attitude control system because it was designed to fly to the limit of the atmosphere.