The De Havilland Mosquito DH.98 was a multi-purpose aircraft of the time of the Second World War from a British production. The two-engine, two-seat machine was manufactured by the de Havilland Aircraft Company in wood construction and used with great success in the war and afterwards. Over 7,700 mosquitos were built between 1940 and 1950 . Due to its high speed and good high-altitude flight characteristics, the Mosquito was almost invulnerable to German air defense. In addition to Great Britain , the machine was also used by the United States , Canada , Australia and the Republic of China, New Zealand , South Africa , Czechoslovakia , Yugoslavia and Israel . 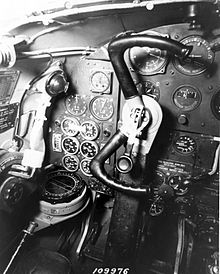 As early as 1938, a team led by RE Bishop began to design the concept proposed by Geoffrey de Havilland under the specification designation BI / 40. Because of the very high speed that the two Rolls-Royce-Merlin engines gave the aircraft, it was initially planned as a high-speed bomber without additional armament. In anticipation of the coming war situation, wood was chosen as a building material in order to save other resources that were important to the war effort. The British Air Ministry was very critical of the project because of this wooden construction and the lack of defensive armament - with the exception of Air Marshal Sir Wilfrid R. Freeman , who approved the design and thus jeopardized his reputation. One of the nicknames for the Mosquito was therefore "Freeman's Folly".

At the beginning of the war, however, the advantage of this construction quickly became apparent. On March 1, 1940, the first serial order for 50 machines was placed. In June 1940, however, the Mosquito fell out of priority production due to the war development, which was limited to the absolutely most important types. Three prototypes were built, including the first (W4050) as a bomber and the second (W4051) as a photo reconnaissance aircraft. The first flight of the pilot Geoffrey de Havilland Jr. took place on November 25, 1940. The first flight tests with a speed of over 630 km / h even exceeded the manufacturer's expectations and the representatives of the Air Ministry were now able to fully appreciate the efficiency of the aircraft convince. Initially, three variants were commissioned: the PR Mk.I as an unarmed reconnaissance aircraft (PR = Photo Reconnaissance), a bomber under the designation B Mk.IV (B = Bomber) and a night fighter with the designation NF Mk.II (NF = Night Fighter).

The first operational deployment of the PR Mk.I on July 14, 1941 confirmed the assessment that defensive armament was not necessary for the reconnaissance aircraft - the aircraft escaped three Messerschmitt Bf 109s who were chasing it by simply flying straight ahead at top speed the Germans had to break off the pursuit.

On November 15, 1941, the first B Mk.IV was delivered to the 105th Squadron, which had been using Bristol Blenheim bombers until then . In May 1942, the B Mk.IV came into combat with Squadron 105. In addition to the advantage of high speed, the robustness of the wooden construction also proved to be advantageous. One of the first missions was the attack by four aircraft of the 105th Squadron on the Gestapo headquarters in Oslo on September 25, 1942. Soon people in Germany were talking about the "mosquito plague".

On the night of December 30th to 31st, 1941, the NF Mk.II was also used for the first time. It soon replaced its predecessor, the Bristol Beaufighter , whose speed it exceeded by almost 80 km / h. Later V1 were also attacked by mosquitos at night; due to the location of their base RAF Ford , about 3 kilometers southwest of Arundel (West Sussex) , the No. 96 Squadron RAF took a brunt and shot 180 of the "doodlebugs". 620 of the flying bombs were shot down within the first nine weeks.

Numerous other variants followed, including the in February 1943 cannons and machine guns equipped fighter-bomber FB Mk.VI (FB = Fighter Bomber), who is also eight missiles could carry under the wings. This variant was also the most built with 2718 pieces. Mk.IX was a high-altitude bomber and reconnaissance aircraft, Mk.XVI was the most popular bomber variant with over 400 units. The Mosquito bombers had the lowest casualty rate of any RAF bomber in World War II. 18 Mk.VI were upgraded to the FB Mk.XVIII "Tsetse", which was used, among other things, with a Molins 57 mm cannon especially against ships. The FB Mk.26 and FB Mk.40 were built on the basis of the Mk.VI in Canada and Australia respectively and equipped with Packard-Merlin engines ( Merlin engines built under license from Packard in the United States). 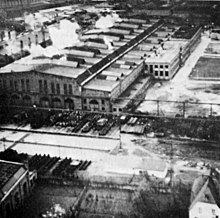 97 NF Mk.II were with AI Mk.VIII - Radar for NF Mk.XII upgraded. In addition, 270 NF Mk.XIII were rebuilt with the same equipment. Other night fighters were named Mk.XV , Mk.XVII (from converted Mk.II ), Mk.XIX and Mk.30 . The latter carried the American AI-Mk.X radar. The NF Mk.36 with Merlin 113 engines and the NF Mk.38 with the British AI-Mk.IX radar were only built after the end of the Second World War. In the German Reich, the Naxos ZR radar detector was used to report mosquito night fighters equipped with "H2S" centimeter wave radars . The British, on the other hand, used systems called Serrate or Perfectos to locate German night fighters.

Because of the high speed, the crews took a while to get used to the machine. Therefore a training variant of the aircraft was built, the T Mk.III . The Australian variant of this type was named T Mk.43 .

50 TR Mk.33s were also built for use on aircraft carriers. These had wings that could be folded away upwards, a radome and mounts for torpedoes. With the original Mosquito, however, the entire wingspan was built in one piece to save weight and simplify the construction.

Other types of use were, among others, that of a high-speed bomber , escort fighter , attack aircraft , transport aircraft , mine layer and target tug . The Royal AF also used these target tugs at their base in the north of the island of Sylt until the end of the 1940s.

The wooden construction turned out to be problematic in tropical regions, as the wing spar sometimes gave way under these conditions and broke despite the high load-bearing capacity. There were also unexpected problems with transfer flights from Canada to Europe - some aircraft exploded in the middle of the Atlantic for reasons that are still unknown.

The last Mosquito - a NF Mk.38 - was built in Chester in 1950 . Some "Mossies" remained in use after the Second World War. In Great Britain the last reconnaissance planes were taken out of service in 1961.

Scheme of the construction of the mosquito bowl

The plane consisted mainly of plywood , spruce and birch wood with an intermediate layer of balsa wood , which earned it the nickname “ Wooden Wonder ” (German: “Wooden Wonder”). The hull of the De Havilland Mosquito was manufactured as a monocoque in two half-shells, which managed with a few longitudinal stiffeners. Neither pressure nor heat was required to manufacture the bowls. The two positive molds, around 12 meters long, were either made of mahogany wood, but some concrete molds were also used, for example in the Canadian production. In the first construction stage, the hull bulkheads and other internal elements were built into slots in the mold. In the second stage, the inner hull skin was laid and the structural components were installed between the inner and outer plywood layers. At the rear of the fuselage, the plywood strips were glued at an angle in order to be able to better absorb the forces arising from the torsional load caused by the tail unit. The grain of the inner and outer stripes ran across each other.

The machine was driven by two Rolls-Royce-Merlin engines with propellers in the same direction of rotation. The radiators were located in the wing leading edges between the engine nacelles and the fuselage. The tip of the fuselage was glazed in bombers. A “radar nose” was used for some variants.

The Mosquito was built in the UK at De Havilland in Hatfield and Watford, at Standard Motors, Airspeed and Percival. In Canada and Australia, the construction took place at the respective De Havilland subsidiaries.

The war production of the DH Mosquito thus amounted to 6,639 aircraft.

Czechoslovakia : Depending on the use, designated as B 36 (for Bitevní letoun, ground attack or attack aircraft) or LB 36 (for Lehka Bombardovací, light bomber).
Turkey

Deployment locations of the British Air Force of Occupation (BAFO) in Germany:

Today there are only three mosquitos left ready to fly. The FB.26 (KA114), flown for the first time in September 2012, is part of the collection of the Military Aviation Museum in Virginia Beach (USA), another (B.35 VR796 / CF-HML) was only restored in 2014 and is in private Canadian ownership . The third, a T Mk.III (TV959), came into the possession of Paul Allen's Flying Heritage Collection from New Zealand in December 2016 after several years of restoration , where it was extensively overhauled and made its second maiden flight on June 25, 2017.