The de Havilland Aircraft Company Limited was a British aircraft and aircraft engine manufacturer founded in 1920 by Geoffrey de Havilland and based in Edgware , later Hatfield . The company became famous for the Gipsy Moth biplane , the Mosquito used in World War II and the world's first jet-powered airliner , the DH.106 Comet .

The de Havilland Aircraft Company was established on 25 September 1920 from the in bankruptcy previous Aircraft Manufacturing Company (Airco), took over from Geoffrey de Havilland parts of the production. The seat was initially at Stag Lane Airfield in Edgware, north-west London. The company's objective was the manufacture and repair of aircraft and aircraft equipment.

Initially, only aircraft were serviced. Soon, however, a small number of self-designed aircraft emerged, mainly for the Ministry of Aviation , but also for the newly established airlines. In 1921, De Havilland was able to secure an extraordinarily talented designer in Ronald Eric Bishop , who was largely responsible for the company's success.

Since de Havilland was dissatisfied with the aviation engines available, the company began producing aero engines based on French models and under the responsibility of Frank Halford . This is how the Gipsy engine was born.

With this engine, the long series of Moth types, which were produced well into the Second World War and which were used as a private aircraft but also as a military trainer , began in 1928 . Some even served as light passenger aircraft.

In 1934 the company moved to Hatfield. This year the DH.88 also won the MacRobertson air race . From this aircraft there is a direct line to the Mosquito fighter aircraft , also made entirely of wood , of which over 7,000 were made during the Second World War.

In 1940 de Havilland acquired shares in the British aircraft manufacturer Airspeed from Portsmouth , which among other things produced training aircraft and cargo gliders . In June 1951, the company came fully into the possession of de Havilland.

After contact with Frank Whittle , the development of a new generation of aircraft with jet engines began . Frank Halford analyzed the Whittle draft and simplified it. This gave rise to the goblin engine that was built into the vampires . Their first flight took place in September 1943.

From 1944 the engine department was run independently as the de Havilland Engine Company . 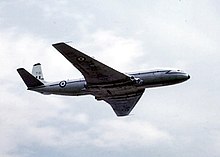 After the war, attempts were first made to break the sound barrier with the DH.108 . During test flights, a machine broke apart in the air, killing the pilot Geoffrey de Havilland Junior , the son of the company founder. While the investigations were still ongoing, the American Chuck Yeager managed to break the sound barrier with the Bell X-1 . A short time later, this was also achieved with another, only slightly modified copy of the DH.108.

De Havilland then concentrated on passenger aircraft construction and, with the Comet, also launched the first commercially successful jet passenger aircraft, which made its first flight in 1949 and went into regular service from 1952. However, two initially inexplicable total losses of two machines in 1954 led to the cessation of production and a start ban. The cause lay in cracks in the aircraft's pressurized cabin, caused by an as yet unknown and insufficiently researched type of material fatigue: the pressure change stressed the pressurized cabin in a way that was new to the developers at the time, so that these effects were not included in the design . De Havilland's findings were also made available to all other manufacturers in order not to endanger further human lives. During this time, American competitors Boeing and Douglas gained the upper hand in commercial aviation. De Havilland remained almost exclusively the British market with the state airlines.

Therefore, one concentrated on the development of strategic long-range missiles. The result was the Blue Streak , which was equipped with a liquid rocket engine , but was never introduced to the troops. For a while, attempts were made to use the knowledge gained for the first stage of a civilian missile, but that too was finally abandoned in 1973.

In 1959, at the instigation of the British government, the company became part of the Hawker Siddeley Group, which then brought the engine division into the Bristol Siddeley company .

In 1962, de Havilland tried to gain a foothold again in the commercial aircraft market with the Trident - already offered as a Hawker Siddeley product , but initially only the British BEA and the Chinese CAAC were able to opt for this three-engine jet. A total of only 117 pieces were built.

In 1963 the de Havilland brand name was abandoned. All aircraft have since been sold under the name Hawker Siddeley.

The naming rights to the de Havilland brand were sold to the Canadian Longview Aviation Capital at the end of 2018.

The Canadian subsidiary was founded in 1928. In the first few years, the British parent company built aircraft. After the Second World War, the company began developing its own models. The company went to Boeing , then Canadair , and later Bombardier Aerospace in the 1970s .

The Australian subsidiary, founded in 1927, initially took on the sales and maintenance of the parent company's products. Since 1939 the company had its own aircraft production. After the Second World War, the DHA-3 Drover was created as an in-house design . DHA was renamed Hawker de Havilland in 1965 and is now part of Boeing .