The de Havilland DH.50 was a single-engine biplane made by the British manufacturer de Havilland Aircraft Company in the 1920s. Licensed versions of the four-passenger aircraft were made in Australia , Belgium and Czechoslovakia .

In the 1920s, the aircraft from the First World War had to be replaced by more modern models. De Havilland then developed an aircraft based on the DH.9 with a cabin designed for four passengers and an open cockpit for one pilot. The hull was covered with plywood.

The first DH.50 made its maiden flight on July 30, 1923 and won an award for reliability just a few days later after flying from Copenhagen to Gothenburg . Of the 38 copies built, 17 were made by de Havilland and the rest as licensed versions from other manufacturers. Several different engines were used. 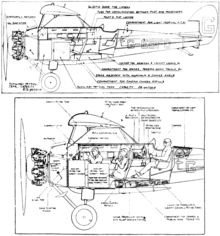 Sectional drawing of the DH.50J G-BEFO used by Alan Cobham for his flight from London to Cape Town (English labeling)

In 1924 the prototype of the DH.50 won the King's Cup Race . With the second model, known as the DH.50J because of its Armstrong Siddeley Jaguar engine, Alan Cobham covered the 25,000-kilometer route from London to Cape Town between November 1925 and February 1926. After being converted into a floatplane, it flew from Great Britain in 1926 to Australia and back again.

Eleven licensed builds were built in Australia, including four 50A and three 50J by Qantas , three 50A by Western Australian Airlines and one 50A by Larkin Aircraft Supply Company . The Royal Flying Doctor Service began operations with one of the aircraft built by Qantas . The Belgian company SABCA built three copies , seven DH.50 were built by Aero in Prague .

Aircraft from the manufacturers Airco and de Havilland Aircraft Company