The designer AE Hagg developed the Fox Moth in 1932 by combining the airframe of the Tiger Moth with a new extended fuselage . The wings , tail unit , landing gear and engine mounts of the Tiger Moth remained unchanged, but the plywood fuselage was given a closed cabin for four people between the engine and cockpit . The first flight took place in Stag Lane in 1932. In the prototype one was de Havilland Gipsy III fitted with 120 hp. Tests were also carried out with swimmers and skis in collaboration with Canadian Airways in Canada.

Many machines were delivered to Canada and Australia , some of them with a closed cockpit.

After the Second World War, de Havilland Canada still produced over 50 copies as DH.83C (Canada). The machines got elevators and trim tabs. The cockpit was delivered with a plexiglass roof as standard. When engine came Gipsy Major 1C with a maximum output of 145 hp. 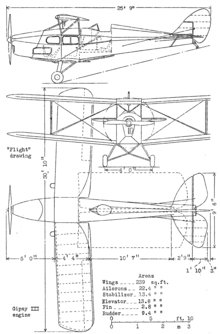