The De Havilland DH.71 Tiger Moth was a single-seat test and racing aircraft , of which only two copies were built. The first flight took place in August 1927. With these streamlined monoplane planes with rigid landing gear , the flight behavior at high speeds and various engine types were to be tested, they were also used in air races .

The de Havilland DH.71 Tiger Moth was developed from 1926 by the de Havilland Aircraft Company from Hatfield , England , in order to test the flight behavior at high speeds and also various alternative aircraft engine types from different manufacturers. For this purpose, a streamlined monoplane with rigid landing gear was built in 1927 , which made its maiden flight in August of that year .

The two Tiger Moth , named after the “tiger moth” as a species of moth from the bear moth family , were then supposed to take part in the King's Cup air race , but the first machine was damaged before the appointment. The second aircraft, equipped with an air-cooled four-cylinder in - line engine ADC Cirrus II with vertical cylinders and an output of 85 HP , had to give up during the race due to the weather.

In August 1927, a new 100 km round flight record was reached with 300.09 km / h. For this purpose, the wings were shortened and a much more powerful, air-cooled de Havilland Gipsy four-cylinder in-line engine with 135 hp was installed. A week later, an altitude record was also to be flown. At an altitude of 5849 m, the pilot Hubert Broad had to give up after technical problems with the oxygen system , although the machine was still climbing .

The first one was repaired and was scheduled to take part in an air race in Australia in 1930 . But already during the preparations the plane crashed after an engine failure, whereby the pilot died in the crash .

The second aircraft was the last surviving example to be destroyed in a German air raid in 1940 during World War II. 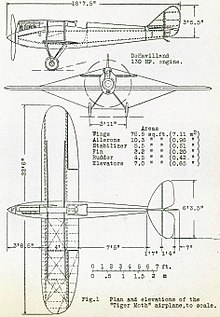