The De Havilland DH.100 / 113/115 Vampire (originally also: Spidercrab ) is a single- engine fighter aircraft produced by the British manufacturer de Havilland Aircraft Company . Although it was still operational in the final phase of World War II , it no longer took part in combat operations.

A total of 4400 machines were built for numerous customers, around 1100 of them under license. Vampires remained in Great Britain until 1955, as a training aircraft until 1966 (in Switzerland until 1990) in use. In the 1950s they also flew with units of the RAF Germany .

First jet on an aircraft carrier 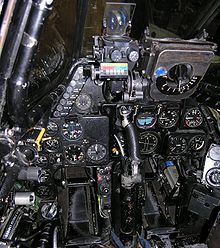 The development began initially as an experimental aircraft in the summer of 1942 according to the specification E.6 / 41. The first flight of the prototype with the registration number LZ548 / G took place on September 30, 1943 and was carried out by Geoffrey de Havilland jun. carried out. The flight test was delayed when the only available engine had to be sent to the USA to replace the only damaged engine there on the Lockheed P-80 . Due to the fact that de Havilland was busy with other types of aircraft, series production was also delayed, so that the first machine in the Mk I production series did not start its maiden flight until April 1945.

The machine showed very good flight performance and flight characteristics. It was the first British model to reach a top speed of more than 500 miles per hour (about 806 km / h). On December 3, 1945, test pilot Eric Melrose Brown landed and took off from an aircraft carrier ( HMS Ocean ) as the first jet engine-powered aircraft . In 1948 it reached a new altitude record of 18,119 m.

Based on the positive tests, a special version was developed for the Fleet Air Arm with the DH.100 Mk.5 Sea Vampire . In addition to its role as a fighter aircraft, the Sea Vampire could also be used as a ground attack aircraft.

The DH.113 was a two-seater night fighter with appropriate radar equipment that was created in 1949 and was originally intended for Egypt. The DH.115 training aircraft was created on this basis.

The last version produced was the DH.100 Mk.11 or DH.115 training aircraft, which came into service from 1950 and of which over 600 units have been produced.

The single-seat unswept means Decker was in all-metal construction fabricated. An exception, however, was the cockpit section, where balsa and plywood components, similar to the de Havilland Mosquito , were also used. The Vampire was equipped with a retractable nose wheel landing gear and was propelled by a jet engine. The double tail girders were characteristic . However, this design made it very difficult for a pilot to exit in the event of an emergency; it was actually only possible if the pilot still had time to lay the aircraft on its back after the canopy was removed. This weak point was eliminated by installing ejection seats , which in Switzerland only took a decade of operation.

The following series were developed for the air forces of the United Kingdom and some other nations:

The following series were developed for use on aircraft carriers of the British Royal Navy :

The following series were created for the armed forces of the two large South Pacific Commonwealth countries:

The last series were exports to other NATO countries:

Guns mounted in the fuselage

Ordnance up to 1,000 kg at several external load stations

Because the machine tended to roll over in tight turns, the Swiss Air Force suffered several fatal accidents. Therefore gradually all machines got an ejection seat . Only single pilots were allowed to fly with the not yet converted “Vampires”.

A de Havilland DH 115 Vampire Mk.T55 of the Austrian Armed Forces is exhibited in the military aviation exhibition Zeltweg in Hangar 8 of the Hinterstoisser Air Base , a branch of the Vienna Museum of Military History .

In the Flieger-Flab-Museum in Dübendorf there is a vampire single seater, in which the cockpit could be climbed. The museum also has a two-seater DH 115.

The Swiss Aviation Museum in Altenrhein also has an airworthy DH 100 Vampire and a DH 115 Vampire Trainer from the Swiss Air Force.

In the Flygmuseum Ängelholm there is a no longer airworthy J28.

Aircraft from the manufacturers Airco and de Havilland Aircraft Company