The inner city toll , also called city toll , is the collection of charges ( toll ) for the use of inner-city traffic infrastructure . In Switzerland , the English term road pricing (road usage fee ) or mobility pricing (fee for road and public transport ) is mainly used. In England itself, however, the inner city toll of London is referred to with the term Congestion Charge . The first city toll worldwide was set up in Singapore in 1975 .

There are various inner city toll models that differ in terms of the assessment and payment of prices or fees, the spatial implementation and the method of charging. Projects implemented so far have often implemented a cordon system, that is, the entrance to a certain inner-city area (so-called “toll ring ”) is subject to a fee. Charges can be collected, for example, via vignette, toll station (manned or unmanned), in-vehicle (on-board unit) or external to the vehicle (post-pay procedure). 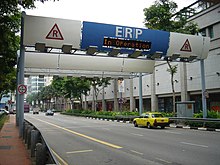 The main practical goals associated with the introduction of urban road user charges are:

From the point of view of (neoclassical) economics , roads are public goods that differ from private goods in terms of non- excludability and non-rivalry. This means that the good is not "consumed" through use and individuals are usually not excluded from use. For this reason, roads usually have to be built by the state , because the market itself does not provide them in sufficient quantities.

However, on a busy street, users hinder each other, creating a certain rivalry. If an individual user now uses this road, he thereby affects others, but does not include this in his calculation. An external effect arises which, without intervention, prevents a welfare-optimized decision and leads to market failure . A city center toll can remedy this deficiency. In order to achieve this, it should be exactly as high as the hindrance to third parties caused by the user, which the user must include in his calculation.

Ideally, the fee should therefore be adjusted to the current traffic load. For example, it should be significantly higher during rush hour than at night with little traffic. A toll with a fixed fee, such as the London Congestion Charge, only partially achieves this goal, as it does not vary during the day and the extent of the third party disability (e.g. the duration of the journey) is not taken into account.

In connection with private transport , there are other external effects such as environmental pollution with a supra-regional impact (e.g. carbon dioxide emissions), which can, however, also be absorbed by a general mineral oil tax .

From the point of view of the orthodox (neoclassical) economy, it generally makes sense to levy a toll for the use of congested roads.

There is a city toll in 14 European cities. 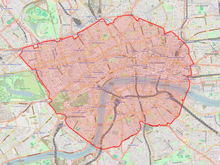 The big attempt in 2006
2006 saw the first practical attempt to introduce road user charges in the city center in the Swedish capital Stockholm . In 1997 a proposal to introduce fees (the so-called Dennis agreement) failed. For this purpose, the social democratic leadership of the city decided under great pressure from the social democratic government in 2003 to introduce road user charges provisionally as part of an attempt, the so-called Trängselskatt , loosely translated traffic jam tax. This started on January 3, 2006 and ran until July 31, 2006.
The experiment provided in detail:

Results:
After six months of trial run, the following results were found: 23% fewer cordon crossings (15.5% fewer kilometers driven within the cordon), 13% fewer fine dust emissions in the city center. The immission situation remained relatively unchanged. The decreases were up to 2 micrograms per cubic meter of air, depending on the measuring point.
Following the trial phase, a referendum ( referendum ) on the permanent introduction of road user charges took place in the city of Stockholm on September 17, 2006, together with general elections . The majority, 53.1% of the votes cast, was in favor of the introduction. The residents of the suburban communities were excluded from the vote. However, several local votes were carried out in the region that were consistently against the introduction. In the meantime, however, there is also a clear majority in the region in favor of maintaining the toll.

Acceptance:
The whole project was controversial for several reasons. Contrary to the express promises of the local social democrats, it was introduced under pressure from the social democratic government to secure a majority in the Reichstag for the social democrats (building on the votes of the Miljöpartiet de Gröna ). The referendum was limited to the city of Stockholm, although the cost of the attempt was borne mainly by residents of the wider region. With Stockholmers the project was controversial in terms of practical handling, which also contributed to the great loss of social democratic votes at local and national level in the 2006 elections. In 2010 around 70% of Stockholmers supported the congestion tax.

Final introduction 2007:
After the 2006 elections, it was unclear whether the city center toll would come back. Within a month, however, the new bourgeois majority decided to start the permanent system from August 2007. The income should primarily flow into the maintenance of the road network. Foreign cars, emergency vehicles, public buses and cars of the severely disabled were exempt from the toll until December 31, 2014, and have been recorded since January 1, 2015. The exemptions for cars with alternative drives and taxis have now been abolished.

A congestion tax based on the Stockholm model was introduced on January 1, 2013 in Sweden's second largest city, Gothenburg .

Modifications of the inner city toll

In contrast to the area-wide city toll, there are various other variants of a toll in cities, which are usually tied to certain routes (not areas). Examples:

Not only on the political side are there major reservations about a city center toll. On the one hand, many politicians are afraid that if they introduce such measures, they will not be re-elected due to the low public acceptance . On the other hand, the vote in Stockholm (see above) and the election campaign of London Mayor Ken Livingstone show that acceptance is increasing and that political majorities are now even possible.

A common objection to road tolls is that they favor rich drivers and disadvantage poor drivers. Because a usage fee of z. B. two euros per trip has a different value for a person with a low income than for a person with a high income (decreasing marginal utility of money). It is therefore important that the revenue from a city toll does not flow into the general budget of a city, but is invested in the improvement of local public transport, so that it can be classified as a local transport tax. This way, those who do not drive because of the toll can be compensated. On the other hand, all citizens who do not even have a car benefit from the better public transport connections. This must be taken into account in the overall social assessment of a toll.