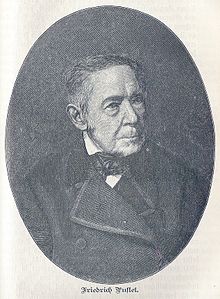 The beginnings of the company go back to the founder Friedrich Pustet (1798–1882). Pustet moved from Passau to Regensburg in 1826 and began building a bookstore there. He soon published numerous books himself and also took over the printing of these works. In 1833, Pustet acquired a spacious property in Gesandersstrasse , where the main business of Bücher Pustet is still located today. Today's multi-storey commercial building with an inner courtyard was not built until 1957 in the post-war style after several medieval and baroque buildings and houses were demolished.

The foundation stone for the Pustet printing company was laid in 1833 with the purchase of a high-speed press.

In 1836 he began the industrial manufacture of paper in the form of continuous paper webs in the towns of Laaber and Alling west of Regensburg based on models in England . At both locations, Schwarze Laber supplied energy to drive the machines that were needed to produce wood pulp and pulp . Later, steam engines could also be operated with the brown coal deposits found near Alling. To greet King Maximilian II , who paid a visit to the facilities in 1855, two strips of white and blue colored paper were printed. After the factories were even connected to Regensburg with the Sinzing – Alling railway in 1875 , Friedrich Pustet had completed the groundbreaking development of the paper industry in the region.

The company expanded rapidly between 1865 and 1898: branches were established in Cologne , Vienna , Rome , Cincinnati and New York , and commercial agencies were set up in Valencia and São Paulo . These branches were given up again in the course of the 20th century.

In 1957/58 a new company building was built in the Regensburg district of Kumpfmühl-Ziegetsdorf-Neuprüll , in which the book printing and bookbinding, publishing and administration were housed.

The Pustet bookstore is one of the largest Bavarian bookstores. There are currently eleven branches in Bavaria, four of them in Regensburg and one each in Ansbach , Augsburg , Deggendorf , Freising , Landshut , Passau and Straubing .

Books Pustet is currently number 5 in the buchreport ranking list of the largest German bookshops (as of 2008).

The book printing and binding company is one of the largest book printing companies in southern Germany today. More than 10 million books are produced each year for a total of 100 different publishing houses.

Missal from the publisher Pustet

In the first years of the publishing house, theological, historical, philosophical, legal, scientific and fiction literature was published.

From 1845 the specialization in liturgical works began with the printing of a Latin altar missal. The publishing house soon achieved world renown in this area. One example is the privilege of 1868, which left the production and distribution of the new chorale books exclusively to Pustet and which lasted for 30 years.

The publishing house also became known through the Catholic family magazine Deutscher Hausschatz, which was founded during the Kulturkampf . Karl May was one of the early regular authors . He published numerous travel novels from 1879 to 1898 and again from 1907 to 1909, e. B. the Orient cycle (1881–1888). The magazine played a pioneering role by showing illustrations in relatively good print quality right from the start, which set it apart from the newspapers of its time. From around 1900 photographs increasingly replaced the reproductions of paintings and graphics. After it was founded in 1874 and until 1910, the paper was called Deutscher Hausschatz in words and pictures , then with the beginning of the 37th year (October 1910 - October 1911) Deutscher Hausschatz - Illustrated Family Magazine . The follow-up publication was called Hausschatz and appeared from 1953 to 1960.

Until the early 1960s, the publishing house was primarily dedicated to the publication of liturgical books. After the liturgical reform of 1963, which allowed the use of the respective national language in the liturgy, a new orientation followed. Theology remained a focus, the history / regional area was added.