The Gobi Desert , or the Gobi for short ( Mongolian Говь Gow , Chinese  戈壁 , Pinyin Gēbì ), is an extensive dry area in Central Asia , Mongolia and China . It consists of contiguous, diverse desert and semi-desert landscapes. Particularly characteristic are the extremely arid, mostly stony and rarely sandy deserts in China, as well as the more life-friendly, wide steppes in Mongolia. With 2.3 million km² it is one of the largest non-polar desert regions on earth .

The Gobi Desert is a vast arid region located in mid-latitude on the Mongolian Plateau in the interior of the Asian continent. In north-west China it includes the contiguous desert areas of Junggar Gobi , Gaxun Gobi , Alashan Shamo and Erdos Shamo , in south Mongolia the Trans-Altai-Gobi , and in south-east and east Mongolia the east Gobi or Mongolian Gobi . Numerous other partial deserts are distinguished within these desert regions. It is roughly bordered by large mountain ranges. These are the Altai and Changai Mountains in the north, the western edge of the Da Hinggan mountain range in the east , Qilian Shan and Bei Shan in the south, and the eastern foothills of the Tian Shan in the west . The sandy deserts of Kumtag , Lop Nor and Taklamakan in the west of the Tarim Basin do not belong to the Gobi Desert . These are connected to it by the Hexicorridor , but separated from it by the Kuruktagh and Beishan mountain ranges .

For a long time, the boundaries of the Gobi Desert were only vaguely defined. The Xamo Desertum area was already shown on some maps from the 17th century as a strip that is clearly delimited and surrounded by a series of mountains, but a systematic survey did not take place until the beginning of the 21st century. Using modern scientific criteria such as the NDVI vegetation index, deserts can be identified in satellite images. Thus it was found that the boundary of the Gobi desert varies under the influence of changing anthropogenic and climatic factors every year. For 1982 the area was 1.16 million km², which decreased slightly in the following years. For 1988 a sudden increase to 1.57 million km² was noted. The area then decreased significantly again, but without reaching the old value. It is believed that this was the result of the El Niño from 1982–1983 and a particularly warm winter and spring in 1989/1990. A more recent study with satellite images, which also uses an aridity index to define the desert area, showed a much larger value for the area. For the period from 2000 to 2012 the average area was 2.35 million km². The value varied between 2.08 million km² in 2009 and 2.47 million km² in 2012. This makes the Gobi desert one of the largest non-polar deserts on earth after the Sahara and the Arabian deserts.

The Bejschan (also Beishan ) is a mainly mountainous desert, it is therefore sometimes classified as a mountain range. It represents a link between the Gobi steppe in the east and the Tarim basin in the west.

Monod classified Bejshan as a desert of its own, as certain animal and plant species occur here and thus forms its own ecosystem. In addition, there is its own geological structure. The area is delimited in the south by the Nanschan Mountains, in the north by the Mongolian border, in the east by the river Edsin Gol, followed by the Alashan.

Today, an expressway connects Xinjiang with eastern China through the desert .

The Alashan (also Alaschan , Mongolian Alxa ) is a sandy desert southwest of the Gobi, which is known in China with the partial desert names Tengger (Tenggeli Shamo) and Badain Jaran (Badanjilin Shamo / Badan Jilin Shamo). It is delimited in the south by the extension of the Nanschan Mountains, in the southeast by the Yellow River , in the east by the Alxa or Helan-Shan Mountains, and to the north by the Yellow River. In the north it extends to the Mongolian border, in the west the Bejschan joins. The landscape has a general altitude of 1000 to 1500 m. In Badain Jaran lies the Biluthu , the highest sand mountain in the world at 1610 meters.

The naming is controversial as some scientists use the term "Alashan-Gobi" and see it as part of the Gobi. "Gobi" is supposed to stand for the shape of the rocky and scree desert. Sometimes the term Alashan itself is avoided. Instead, the region is further subdivided into the Badain Jaran and Tengger (Mongolian: "wide sky") deserts.

According to researcher Prschewalski , the Alashan is a plain that probably once formed the bed of a large lake or sea. He deduced this from the flat shape of the region as a whole and the salt plains including salt lakes in the deepest parts. In the Tengger Desert in particular, nothing can be seen for hundreds of kilometers but bare sand; hence the Mongolian name "Tengger" for wide sky. There are almost no oases in the Alashan. There is also gravel instead of yellow sand near the adjacent mountains.

In the western part of the Alashan there are dunes that are up to 520 m high ( Biluthu ) and thus represent the highest dunes on earth. Of the 140 salt lakes that can be found between the dunes, some are considered sacred to the Mongols. Therefore, there are also Lamaist monasteries here. The inhabitants today are mainly Han , Mongols and Hui . 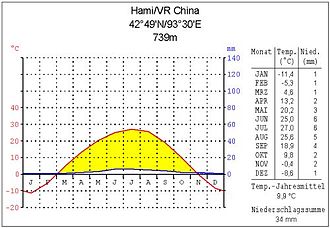 Climate diagram Hami
(on the northern edge of the Gaxun-Gobi)

The Gobi is a desert with a continental climate . In its largest part, in the Mongolian Gobi in the east, there is a cold steppe climate . This goes west of the 110th degree of longitude, from about the Ordos Shamo, into a cold desert climate . Further west, from the 106th degree of longitude, with the beginning of the Alashan Shamo, the altitude decreases, there is hardly any vegetation and sand dunes appear.

In winter and spring there can be light snowfalls, but these rarely cover the ground with a few centimeters. Summer is the rainy season with few but often torrential rains. Precipitation reaches a maximum of 390 mm / a in the East Gobi and decreases towards the west. The Gaxun-Gobi is the driest area with precipitation levels of approximately only 20 mm / a.

Probably the first written use of the word Gobi can be found in the map by Robert Morden from 1695. There it says: Desertum Xamo hodie Gobee (Shamo desert today Gobi).

In the center of this map from 1747 reads: The KOBI or Sandy Desert, by the Chinese SHA-MO (i.e. the Gobi or sandy desert, called Shamo by the Chinese.)

The term Gobi is used ambiguously. On the one hand, it stands for the geographic object Gobi Desert, that is to say for a specific dry area in Central Asia that has a somehow defined boundary and bears the name Gobi. On the other hand, the word Gobi is also used as a geomorphological synonym for stone desert , which is a dominant landscape element in the Gobi desert. In the Gobi desert, contemporary geography distinguishes between Gobi for the stony landscapes and Shamo for the sandy landscapes.

Originally, the inner-Asian deserts got their names from the local minorities. In China, these terms were later transliterated from the local languages ​​into the Chinese script , often with a change in their meaning. The Sino-Mongolian desert belt was completely unmanageable and almost endless for early European trade travelers. To get from the Middle East to China, the difficult and dangerous crossing of the sandy plains and bare mountains of the “great desert”, as Marco Polo called it in the 13th century , took a whole month at its narrowest point. The Mongols called the desert Govi ​​or Kébé, which meant "waterless place" and comes close to the modern definition of desert. In the 17th century, the name Gobee A1 was first mentioned on European maps. At the same time, as the Europeans perceived it and noted it on their maps, the Gobi desert in China was also known as Sha-mo ( 沙漠 ), which actually means sand desert.

However, in China and Mongolia, the Gobi Desert has been and is differentiated more geographically and geomorphologically into partial deserts and other names may be used. When it comes to geomorphological classification, gobi is only used if more than 50% of the area is covered by loose, unsorted rubble and gravel with a diameter of 4 to 64 mm. An example of such a regional geomorphological unit is the Junggar Gobi ( 准噶尔 戈壁 ) on the northwestern extreme of the Gobi Desert in China. According to this definition, around 43.5% of all Chinese desert areas are Gobi deserts, i.e. stony deserts. The Junggar Gobi is also an example of the fact that even today, for historical reasons, different names are used in inconsistent spelling for the same area. It is also known as the Gurbantünggüt, Gurban Tunggut, Djungarian or Dzoosotoyn-Elisen desert. A2

If the sand is blown by the wind and forms large areas or small dunes, then in China the term shazhi huangmo ( 沙质 荒漠 "sandland") is used, such as Hunshandake Shazhi Huangmo ( 浑善达克 沙地 , English "Hunshandake") Sandy Land ", German" Hunshandake-Sandland ") at the eastern extreme of the Gobi Desert in China. 45.3% of all Chinese desert areas are such sandy deserts. In Mongolia, the sandy deserts are called Els, such as B. the dune field Khongoryn Els .

The remaining arid areas are steppes with semi-stable or stable dunes and sand areas that are referred to in China as shadi ( 沙堤 ) or sand land , such as Horqin Shadi ( 科尔沁 沙地 ), also located at the eastern extreme of the Gobi desert. 11.2% of all Chinese desert areas are steppes.

Many important fossils , including fossils, from different geological epochs have been found in the Gobi . Most of the finds of dinosaur eggs and entire nests come from here. In previous sections of the earth's history, different climatic conditions prevailed with lush vegetation, which provided correspondingly good living conditions for dinosaurs .

The Gobi is best known in history as part of the Mongol Empire . There are also some important trading cities on the Silk Road on the southern edge of the Gobi.

Numerous animal species can be found in the Gobi Desert and the surrounding regions, including wolves , jiggetai , goitered gazelle , gerbil and steppe iltis . There are also some snow leopards .

The desert is home to some drought-adapted shrubs and grasses. However, the area is very vulnerable to grazing and vehicles. Human influences are greater, especially in the eastern part, where more rain falls and livestock farming is worthwhile. In Mongolia , grasslands have recently been pushed back by the greater proportion of goats in the herd. The goats provide valuable cashmere wool , but unlike sheep they tear up the grass by the roots. The high-quality cashmere wool is one of Mongolia's main exports and is almost 100% purchased by large Chinese textile companies. Since this increase in production was not sustainably driven forward, the ecosystem is considered extremely endangered. Since the herds of cattle were privatized in the 1990s, there has also been no state control of pasture areas.

In the People's Republic of China provides desertification is also a serious problem, not least because it in the form of sandstorms also densely populated areas such as Beijing is concerned. In Inner Mongolia attempts are being made to counteract overgrazing by closing off large areas of pasture land and resettlement. In addition, broad protective plantings ( China's Green Wall ) are being created, especially along traffic routes , in order to limit the effects of sandstorms.

A1 Variations of "Gobi" from the 18th century:

A2 Alternative names for the Junggar Gobi: