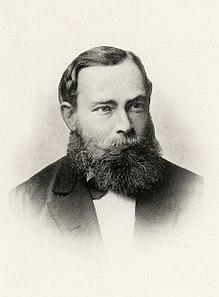 His outstanding achievement in the field of logic is to be the first to develop formal language and, related to it, formal evidence . He thereby created an essential basis for today's computer technology and informatics as well as for formal methods in linguistic semantics .

In the field of philosophy, his reflections on the philosophy of language were extremely influential. He directly influenced, among others, Rudolf Carnap , who studied with him, Bertrand Russell and Ludwig Wittgenstein . Frege is considered to be one of the main pioneers of analytical philosophy , one of the most important currents in 20th century philosophy .

Gottlob Frege's parents were Karl Alexander Frege (* 1809 in Hamburg ; † 1866) and Auguste Wilhelmine Sophia Bialloblotzky (* 1815 in Pattensen ; † 1898). The marriage took place in 1846. Frege's father was a teacher and director of the Wismar Lyceum , a private high school for girls that he himself founded. In particular, elementary classes in New High German were given there (in addition to classes in religion, French, history, natural history, geography and arithmetic) for the daughters who originally spoke Low German (starting age was eight). Karl Alexander Frege also published a New High German grammar in 1862. Frege's mother Auguste had been a teacher there from 1843 and later, after the death of her husband in 1866, successfully ran the girls' school founded by her husband for ten years. Her father was Heinrich Sigmund Bialloblotsky (1757-1828), who was superintendent in Pattensen and from 1822 in Wunstorf . The Bialloblotzky family came from the Polish noble family Ogonceyk, who emigrated from Poland to Germany (Seehausen near Wittenberg) in the 17th century for reasons of faith. Frege's maternal grandmother was the daughter of superintendent Ludwig Wilhelm Ballhorn, who traced her line back to Philipp Melanchthon . Other ancestors of Frege were his maternal uncle the explorer in Africa, headmaster, pastor and missionary Christoph Heinrich Friedrich Bialloblotsky (1799–1869) and his paternal grandfather, the merchant and Saxon consul in Hamburg Christian Gottlob Frege (1779–1811), who with the Daughter of a realtor Printz was married. He came from a well-known Leipzig banking family (see Christian Gottlob Frege )

Frege also had a brother Arnold Frege (* 1852). In 1925, the year Frege died, he is mentioned as a writer in Neudamm near Stettin.

The birthplace in Böttcherstr. 2 in Wismar, which the father bought in 1846, was destroyed in the Second World War. The school was there too.

Frege attended the grammar school Große Stadtschule Wismar . One of his teachers, Leo Sachse, apparently had a great influence on him. The name "Leo Sachse" is later used in examples in Frege's writings. After his father died in 1866, Frege began his studies at the University of Jena in 1869 on Saxon's advice . Among other things, Ernst Abbe , who supported Frege in his scientific career, and the philosopher Kuno Fischer , whose ideas Frege intensively dealt with, taught here. 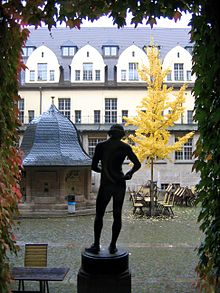 View of the main building of the University of Jena

In 1871 Frege moved to the University of Göttingen , where he submitted his doctoral thesis in 1873 on a geometric representation of imaginary structures in the plane . Frege returned to Jena , where he in 1874 when Abbe on the subject of accounting methods, which are based on an extension of the term size habilitated . He taught as a private lecturer . In 1879 he was appointed associate professor.

In 1887 Frege married Margarete Lieseberg, daughter of the businessman Heinrich Lieseberg from Grevesmühlen . The marriage remained childless (according to other sources, they had at least two children who died young), and the Frege couple adopted a boy, Paul Otto Alfred Frege (formerly Paul Otto Alfred Fuchs).

In 1895 Frege was elected a member of the Leopoldina . In 1896 Frege was appointed full honorary professor in Jena and taught there - little noticed by students and colleagues - until his retirement in 1917. Frege's only student of importance was Rudolf Carnap , who later continued his work and made it known in many ways. After all, Frege had scientific contact with the Nobel Prize winners Rudolf Eucken and Bertrand Russell .

Frege's scientific work was thrown into a severe crisis by the discovery of Russell's paradox in 1902 (see also the section on mathematics ). In 1903 Frege admitted in the epilogue of his fundamental laws of arithmetic that Russell had "shaken the foundations of his structure".

In the following years Frege fell into a depression , which was expressed, among other things, in the fact that he no longer published any major works. Only after his retirement did a series of three related logical investigations reappear: The Thought (1918), The Negation (1918), and Thoughts (1923). He had at least partially overcome his life crisis. In the part of his diary published in 1994 from the estate (for 1924) there are anti- democratic , anti- Catholic , anti- French and anti-Semitic remarks; however, Frege has probably never made a political appearance in public. Frege spent his twilight years in Bad Kleinen , near his hometown Wismar.

Frege's estate came to Münster in 1935 on the initiative of Heinrich Scholz , where a large part of it was destroyed in a bombing raid in March 1945. 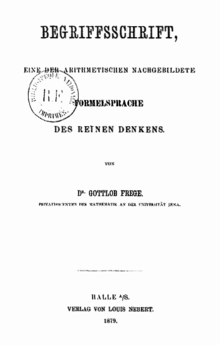 The title page of the conceptual writing

After the non-formal syllogistics founded by Aristotle had been considered the most exact form of logical reasoning for more than 2,000 years, Frege's revolutionary “ conceptual writing ” from 1879 began a new era in the history of logic. In this publication he developed a new logic in axiomatic form that already comprised the core of modern formal logic , namely a second level predicate logic with a concept of identity .

Along with George Boole and Ernst Schröder, Frege was one of those nineteenth-century logicians who laid the foundation for research into the foundations of mathematics by improving logic . According to Wilhelm Ackermann and David Hilbert , who often referred to his writings in their work, Frege's most important contribution is the "fulfillment of mathematics' need for exact foundations and strict axiomatic treatment."

In the philosophy of mathematics , Frege emerged as a sharp critic of found approaches: In the foundations of arithmetic there is an extensive and influential analysis, especially of the theories of Immanuel Kant , who understands arithmetic sentences as synthetic a priori judgments , and John Stuart Mills , for the arithmetic Sentences are general laws of nature confirmed by experience .

In addition, Frege was the founder of a new mathematical-philosophical program, logicism , according to which the propositions of arithmetic can be traced back to logical truths. This program is outlined informally in the Fundamentals of Arithmetic and carried out in a strictly formal manner in the later Fundamental Laws of Arithmetic .

The system of logicism, however, contained a contradiction (the so-called Russellian antinomy ), as Frege learned in a famous 1902 letter from Bertrand Russell. Frege saw his life's work failed and resignedly withdrew from logic. Nonetheless, his work had laid the foundations upon which others, especially Russell, could build and complete the logistic program. 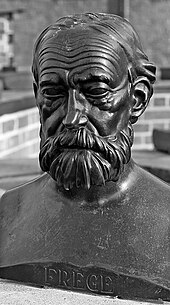 Bronze bust of the Frege monument on the tower of St. Mary's Church in Wismar

In the field of linguistic philosophy , Frege differentiates between a sense and a meaning that are assigned to every linguistic sign. Frege's terminology deviates from normal usage and is therefore somewhat misleading, because by meaning he means the reference or reference of an expression, while its meaning is close to what is usually referred to as meaning . Frege basically knows three different types of linguistic expressions: proper names, sentences and conceptual expressions. For each of these types, a distinction can be made between sense and meaning: