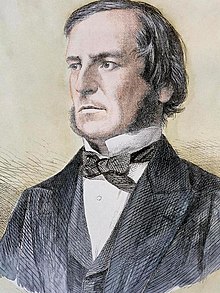 George Boole [ ˌdʒɔːdʒ ˈbuːl ] (born November 2, 1815 in Lincoln , England ; † December 8, 1864 in Ballintemple, County Cork , Ireland ) was an English mathematician ( self-taught ), logician and philosopher . He is best known for the fact that Boolean algebra, which is fundamental to computer technology , was named after him.

George Boole was born in Lincolnshire. He had not attended any secondary schools other than primary education. He taught himself ancient Greek, French and German by himself. At the age of 16 he became an assistant teacher to support his family financially. At the age of 19, Boole started his own school. Due to his scientific work he became a mathematics professor at Queens College in Cork (Ireland) in 1848 , although he had not attended university himself. There he met Mary Everest , his future wife. She was interested in mathematics, worked as a librarian and dealt with the didactics of mathematics. Her uncle George Everest was the namesake of the highest mountain in the world. George and Mary had five daughters, including the author and musician Ethel Lilian Voynich (1864-1960) and Alicia Boole Stott (1860-1940), who, as a mathematician with no formal academic education, managed to classify the regular polyhedra in four dimensions. Boole was awarded the Royal Medal by the Royal Society in 1844 . In 1847 he published his epoch-making logic work The Mathematical Analysis of Logic and in 1854 his more detailed book An Investigation of the Laws of Thought . In 1857 he was elected a member ("Fellow") of the Royal Society.

George Boole died of a feverish cold on December 8, 1864 at the age of only 49. On his footpath he walked two miles in the pouring rain to the university, where he then gave his lecture in soaked clothes. He caught a cold, developed a high fever, and did not recover from it later. His wife was a supporter of the naturopathy of the time, which used to treat "like with like". She is said to have poured buckets of cold water over her husband, who was sick with the feverish cold, in bed. Pleural effusion was given as the cause of his death .

In his work The Mathematical Analysis of Logic from 1847, Boole created the first algebraic logic calculus and thus founded modern mathematical logic , which differs from the logic that was customary up to now through a consistent formalization. He formalized classical logic and propositional logic and developed a decision-making process for the true formulas using a disjunctive normal form . Boole anticipated the solution of the problems posed by David Hilbert well over 70 years before Hilbert's program for a central area of logic - since the decidability of classical logic implies its completeness and freedom from contradictions . As generalizations of Boole's logic calculus, the so-called Boolean algebra and the Boolean ring were later named after him.

Boole used the common algebra, which today is specified as a power series ring over the field of real numbers. He embedded classical logic in it by calling for the conjunction AND as multiplication and negation as the difference to the defined and, for logical terms, idempotency , that is:

It is an embedding in which not all terms have a logical sense; for example, because the sum is logically meaningless, which is why Boole called it uninterpretable. The addition is only a partial operation in the logical domain, which is why he spoke of elective symbols, elective functions, and elective equations for the logical terms and operators. This fact was criticized by his successors. But his method is completely correct. Because the logical area is operationally closed: It is the structure created by the idempotent indeterminate, the 1, the multiplication and the negation, since is idempotent and with and also and are idempotent, as one can easily calculate. This means that all logical operators that can be derived by definition also have an effect in this area, in particular the inclusive and the exclusive disjunction:

Both definitions belong to the logical area:

Boole designed his calculus primarily as conceptual or class logic , in which the universe (the universal class) is and the indefinite classes (concepts) represent. Within this calculus he then presented the scholastic syllogistics with systems of equations. He represented its basic predicates with equations:

ALL ARE    with equivalent forming

Secondly, Boole also used his calculus as propositional logic , in which the indefinite represent statements and and the truth values:

Under the Boolean algebra today not Boole's algebra is understood original, but the Boolean Association , the Boole developed successor. In 1864 William Stanley Jevons removed the logically meaningless mathematical terms from Boole and gave the addition a logical sense as an inclusive OR with the rule . Boole, who corresponded with him, disagreed with this reinterpretation of addition because the rules of usual algebra are violated, because implied in it . Nevertheless, this modification of Boole's calculus prevailed, significantly influenced by Ernst Schröder , who formulated the first complete system of axioms in 1877, which Giuseppe Peano brought into the modern non-additive form in 1888.

Boolean calculus can also be modified in such a way that logically meaningless terms no longer occur and the usual calculation rules for addition are preserved. For this, the addition must be completed in the logical area and fulfill the idempotency; then specifically what implies holds , so that also holds and self-inverse terms are present. This gives the addition the sense of the exclusive EITHER-OR. Ivan Iwanowitsch Schegalkin gave this calculus variant for the first time in 1927 together with a complete axiomatization. This creates a so-called Boolean ring , which Marshall Harvey Stone gave the name in 1936. Boolean rings are computationally elegant, because the math rules that are familiar from school apply here. The normal form necessary for the decidability of a formula is created here simply by distributive multiplication and deletion of double factors and summands with the idempotency and the additional rule .

Both calculus variants are implicitly contained in Boole's original calculus, since one can derive both axiom systems with its definitions.