Hardworking beaver (also English busy beaver ) are special Turing machine , the possible write many ones on the tape and after a finite number calculation steps to halt state taking (ie pause ). The Radó function (also hard-working beaver function ) indicates the maximum number of ones that a hard-working beaver can write with a given number of states. Both were first considered in 1962 by the Hungarian mathematician Tibor Radó .

The maximum number of ones which a diligent beaver with write conditions, the value of the Out hard Beaver function (also Radó function) at the location defined .

The determination of the hardworking beavers is a problem that cannot generally (for everyone ) be solved algorithmically. It is not generally possible to decide whether a given Turing machine with states actually writes a maximum number of ones on the tape. However, this is possible for individual Turing machines of low complexity. So the set of values ​​of is neither decidable nor recursively enumerable , although it is well-defined . Since the complement of this set cannot be recursively enumerated either, this set is often chosen as an example for a language that is not in the first level of the arithmetic hierarchy .

Because of these properties of the value set, the function cannot be calculated . It can also be shown that its asymptotic growth is stronger than that of any computable function.

In practice it has been shown that even realistically speaking, it no longer seems possible to know about the value . To do this, one would have to find out for each individual Turing machine with states after how many steps it holds, or else prove that it does not. For a given number of states (plus a hold state) there are different Turing machines for an alphabet with two characters , because for each of the input states it must be determined for each of the two possible read symbols which of the two symbols is to be written on the tape and in which direction the reading head should be moved and which of the possible states the Turing machine should then assume. Different Turing machines have to be considered even with possible input states.

The Bulgarian Georgi Georgiev published a study in 2003 in which he analyzed diligent beavers to see whether they would stop or not. For only just over 40 hardworking beavers evaded a reliable result, because they could not be finally analyzed with the methods used by Georgiev due to special behavior. Of those determined to be terminating (sustained), none writes more than 4098 ones on the tape.

Hardworking beaver with a condition

The partial transfer function is defined as follows:

Hardworking beaver with a condition 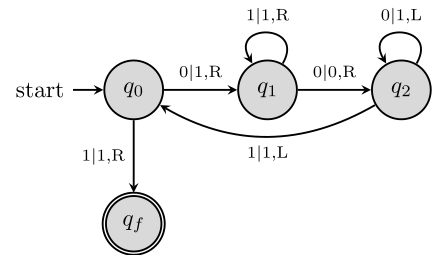 Radó also defined a function whose value is the maximum number of steps of a holding Turing machine with a two-element alphabet and states. This function cannot be calculated either; if it were, the stopping problem with an empty input tape could be resolved , because a Turing machine with states that does more than steps never stops.

Since a maximum of one can be written in each step, the following applies

The following relationship still exists between the functions and .

Another non-calculable function results if the additional restriction is introduced that all ones must form a coherent chain.

The name for it has become common.

In 1965, C. Dunham specified another variant of the function of the hardworking beaver. is defined as the maximum number of ones that a Turing machine with a two-element alphabet and states can write if it is put on a tape with a block of ones and holds it. If this function were calculable, there would also be a Turing machine M with a two-element alphabet that calculates. This Turing machine has states. Then , where the equal sign is precisely the definition of M, and the sign stems from the fact that M is a machine with states and is attached to (i.e. a block of ones) and therefore, according to the definition of D , must satisfy the inequality . This contradiction shows the unpredictability of D.