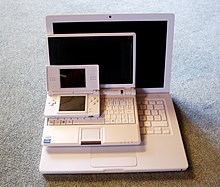 Subnotebook is the name for a particularly small and light notebook . Common screen diagonals for these ultra-portable notebooks range from 10.6 " (27 cm) to 12.1" (31 cm) up to a maximum of 13.37 "(34 cm). Display sizes smaller than 10.6 ″ are currently mostly used in small computers, e.g. B. Ultra-Mobile PCs (UMPCs) assigned, larger 14.1 ″ (36 cm) to the most common notebooks in the areas of office applications, multimedia and PC games. The weight of currently marketable devices is just under one to a maximum of two kilograms. The equipment is often close to that of a full-fledged notebook, but optical drives are usually dispensed with and the keyboard is reduced in size. Sometimes there are fewer connections .

There are exceptions that are equipped with a full keyboard or with an optical drive, but these are a little heavier and / or larger.

The boundary to the keyboard-operated, but still smaller Ultra-Mobile PCs is fluid; In the past, the delimitation criterion - in addition to the display size and thus the form factor - was often the availability of a full-fledged operating system , as was also used on desktop computers . Physically, in terms of size, weight and computing power, they border on tablet PCs and smartphones . However, these are typically not constructed in AMD64 architecture like the subnotebooks , but in ARM architecture .

Often, subnotebooks are used due to the smaller sales market compared to standard notebooks with screen diagonals of z. B. 14 "(35.5 cm) or larger initially only produced in small numbers.

Disadvantages of these handy devices are the small screen (especially lower screen resolutions), reduced keys with short travel and partly - due to the size and to save weight - small batteries , which reduce the runtime without a mains connection compared to full-fledged notebooks. However, there are also models where a combination of particularly economical processors and, in some cases, deliberately less powerful components, achieves a very long battery life, sometimes over 10 hours. In many cases, the purchase price is significantly higher than for a comparable standard notebook, either due to the compact design or the long runtime.

The Compaq LTE, released in 1989, was the first relatively well-known computer to be called a notebook computer due to its relatively small size of 27.9 × 21.68 × 4.88 cm, which is roughly the size of an A4 page . After Compaq, IBM launched the ThinkPad series, whose models used a 10.4 ″ screen and were 29.7 × 21 × 5.6 cm in size. Smaller portable computers than these two were quickly called subnotebooks . The NEC UltraLite appeared in 1988 and was named that way because of its size of 29.8 × 21 × 3.5 cm. Smaller DOS-based computers such as B. the Poqet PC and the Atari portfolio , both published in 1989, were however called Pocket PC or Handheld .

A subnotebook released in 1992, the Gateway Handbook (24.6 × 15.0 × 4.1 cm, 1.4 kg), used a 486 processor towards the end of 1993 . In another subnotebook from 1993, the HP OmniBook 300, the hard drive installed as standard could be replaced with an optional solid state drive at an additional cost . Toshiba, which has been building portable computers since 1980, launched its ultra-portable Portégé series in 1993 with the Portege T3400, which had a monochrome 8.4 ″ screen. The Libretto 20 , however, was even smaller (about the size of a VHS video cassette) and had a 6.1 ″ screen with a hard disk capacity of 270 MB. The Olivetti Quaderno, a full-fledged PC with MS-DOS in the format of today's netbooks, also caused a stir in 1992 .

In 1997 Apple brought out the PowerBook 2400C with a 10.4 ″ screen. This notebook was co-designed by IBM to replace the old Powerbook Duo. After that, Apple continued its subnotebook segment with the iBook G3 with a 12 ″ monitor. IBM started with the ThinkPad 240 (1.3 kg), which was specially designed for business travelers, in the subnotebook market. This subnotebook was replaced by the X series of ThinkPads , which had a 12.1 ″ screen. In 1996, 1997 and 1998 the Libretto subnotebook series from Toshiba (210 × 165 × 33.4 mm) was released. This series was only continued again from 2005.

One of the most remarkable subnotebooks for today's market was Sony's Vaio PCG-C1 VE, also called PictureBook , based on a Transmeta processor , with a size of 24.9 × 15.4 × 2.5 cm. The special thing about this model at the time was that a camera was attached to the display lid, which can be found on many current laptops. In 2001 Dell introduced the Latitude L400 . The special feature of this notebook was the variable speed of the Intel CPU . In 2005 the FlyBook was presented as a tablet PC with a screen of only 8.9 ″. This subnotebook was available in many different colors and was featured in non-PC magazines such as B. FHM , GQ etc. The Samsung Q1 was a UMPC, which was a very small version of a tablet PC and was operated with Windows XP Tablet PC Edition 2005.

In August 2007, Toshiba introduced the Portégé R500, a fully-fledged subnotebook weighing less than 800 g. The 12 ″ screen of this model should also be available in a flexible and bendable version. In connection with a 64 GB solid state disk (SSD), this model can withstand heavy loads and vibrations. In January 2008, Apple introduced the MacBook Air, an ultraportable subnotebook with a height of just 0.4 to 1.94 cm (dimensions: 32.5 × 22.7 × 1.94 cm, 1.36 kg). It has a 13.3 ″ display, an integrated battery, integrated RAM and can also be ordered with a 64 GB solid-state disk. The only ports available are a USB port, a headphone jack and a mini DVI port. Connectivity must be established via WLAN , Bluetooth or a USB Ethernet adapter.

Since 2007 there has also been a sub-class of netbooks , which are particularly inexpensive and minimally equipped subnotebooks. One example of this is the Eee PC , which Asus introduced in late 2007. The Linux distribution Xandros is installed on this computer, but it can also run with Windows. This netbook quickly topped the sales rankings of major Internet department stores. However, it has a very small screen with 7 ″ and a resolution of only 800 × 480 pixels in relation to the housing.

The Chinese manufacturer Lenovo introduced the Thinkpad x300 in spring 2008, which is based on the technology of the Thinkpad patents acquired by IBM. It is only supplied with a 64 GB solid-state drive, which significantly increases the entry-level price, but also leads to an improved battery life and reduced susceptibility to physical stress. It offers significantly more connection options than z. B. the Mac Book Air and can achieve very long operating times by exchanging the optical drive for an additional battery.

At the beginning of 2008, some “mid-range” subnotebooks came onto the market, trying to close the gap between the scarce netbooks and the expensive high-end devices. Eastern European brands such as the Polish manufacturers NTT and Aristo are particularly in tough competition with Asian manufacturers such as Asus .

At a time when the subnotebook market was expanding rapidly and the demand for special components rose rapidly (see Intel's ULV CPUs), Intel in particular saw an opportunity to occupy the segment and developed a special platform. The marketing name for this is " Ultrabook " (AMD followed suit with the "Ultrathin"). Marketing emphasizes the slim design and long battery life.