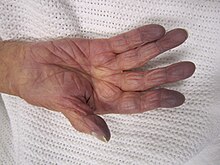 As cyanosis , cyanosis or cyanosis (from ancient Greek κυάνεος kyáneos " blue " and - οσις , -osis "[pathological] state"), German blue addiction , one describes in medicine a purple to bluish discoloration of the skin , the mucous membranes , the lips and the fingernails . The special tint does not have to appear simultaneously or equally in all of the areas mentioned. In acute cases, cyanosis can be a symptom of a dangerous or life-threatening disorder of the organism or, if it persists for a long time, it can also be a model for chronic diseases. 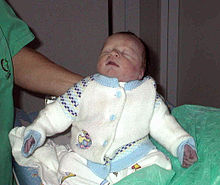 The cause of cyanosis is usually a deficiency of the blood with oxygen , either due to lack of recording capability, as at too low oxygen concentration in the breath, an airway obstruction or too long diffusion distances in pathological changes in the lung . The bluish coloration results from the oxygen-dependent coloration of the hemoglobin . While oxygen-rich (oxygenated) hemoglobin is bright red, low-oxygen (deoxygenated) hemoglobin appears dark red / blue. Cyanosis is usually visible from about 5 g of deoxygenated hemoglobin (Hb) in 100 ml of blood.

A high dose of the antioxidant propyl gallate (E310) can also trigger cyanosis .

A distinction is made between peripheral ( exhaustion cyanosis) and central cyanosis ( mixed cyanosis ), which can also be present at the same time.

Peripheral cyanosis of the fingertips.

Peripheral cyanosis occurs as a result of increased oxygen depletion in the periphery of the body due to slowed blood flow. It can primarily be seen in the discoloration of peripheral parts of the body such as the skin and extremities . The cause can be a reduction in cardiac output ( heart failure ), venous thrombosis , varicose veins , acrocyanosis caused by neural disease or blood changes ( polyglobulia , cold agglutinins , cryoglobulinemia ).

The appearance of cyanosis as a result of shunt reversal in heart defects that were not initially associated with cyanosis is known as late cyanosis or Eisenmenger's reaction .

Methemoglobinemia as a cause of cyanosis

A special and comparatively rare disorder that causes cyanosis is the so-called methaemoglobinemia . It is caused by an increased concentration of methemoglobin (Met-Hb, oxidized form of hemoglobin) in the red blood cells. This can be due to a hereditary enzyme defect (not treatable) or caused by the ingestion of substances that have an oxidizing effect on the red blood pigment, such as nitrites (see also poppers ), chlorates or aromatic amines , or by an increased nitrate concentration in food or Drinking water of over 100 mg / l. Met-Hb cannot transport oxygen molecules and as a result of the reaction, the iron bound in hemoglobin loses its ability to store oxygen and release it to organs and body parts. If the concentration of Met-Hb increases by more than 10% of the total amount of hemoglobin (more than 70 to 80% is fatal), there is a lack of oxygen in the blood and cyanosis develops. The chocolate-colored blood will be noticed during a blood test. The skin is slate gray. Symptoms of lack of oxygen in the blood often include dizziness, nausea, headache, increased heart rate, shortness of breath, and drowsiness ( somnolence ). Methaemoglobinemia is particularly dangerous for babies and young children, and its effects are sometimes mistaken for symptoms of a heart defect at these ages. This can result in valuable time being lost in therapy. For treatment, the harmful substance must first be avoided.