When hypoplastic left heart syndrome ( HLHS ), also Linksherzhypoplasie syndrome called ( hypoplastic = too small, underdeveloped ), is more associated with each occurring malformations of the heart and the connected main artery ( aorta ). The hypoplastic left heart is characterized by a complete ductus dependence (i.e. the blood flow through a small vascular connection, the ductus arteriosus Botalli). The reasons for this are:

Endocardial fibrosis (thickening of the heart wall without functional benefit) of the left ventricle and atrium can also occur regularly. Usually the ventricular septum (heart septum at the ventricular level) is intact, while an open foramen ovale (= opening between the right and left atrium, which due to its appearance is called foramen ovale (= "oval hole")) or a real atrial septal defect (ASD) allows the pulmonary venous blood (flowing from the pulmonary vein) to flow out of the left atrium into the right atrium. In up to 20% of cases there is a preductal aortic coarctation (= narrowing of the aorta in front of the confluence of the ductus arteriosus). The right heart structures are usually enlarged in a compensatory manner (enlargement / hypertrophy of the right atrium and ventricle). 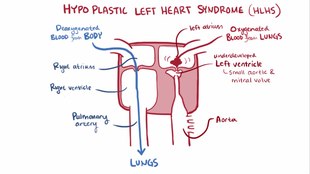 In contrast to the regular blood flow of a properly developed heart, in HLHS the blood from the pulmonary veins initially flows through the left atrium. The existing atrial gap (foramen ovale), which ensures the child's survival, allows the blood to mix with non-oxygenated blood via the right atrium. This is called medically a left-right shunt . The mixed blood then flows from the right ventricle into the pulmonary artery and further via the Ductus arteriosus Botalli back into the descending aorta (descending part of the aorta, further divided into the thoracic aorta and the abdominal aorta ). At the same time, blood flows through the open ductus arteriosus against the normal direction of flow into the (underdeveloped) ascending aorta (part of the aorta from which the coronary arteries arise) and thus into the coronary arteries. This process is called “retrograde perfusion”.

Children with this clinical picture are also referred to as "blue babies".

Infant according to Norwood2 in intensive care

If a diagnosis of hypoplastic left heart syndrome has been confirmed, there are now various approaches to treatment:

Although the HLHS is certainly a serious cardiac malformation complex, the experience of the last few years shows that the treatment of this heart defect now offers good treatment prospects in the specialized heart centers. Experience from America shows that there are already adults who were once born with HLHS and who received a good to very good quality of life through the Norwood procedure. In America, the HLHS is no longer a mandatory indication for an abortion. On the contrary, there is even an obligation to treat children with this malformation, since with adequate treatment these children can be helped to lead a normal life with a good quality of life.

The different perspectives between Germany and America also stem from the fact that z. In part, the figures from the beginnings of this surgical technique in Germany are still included in the mortality rates, which thus show a falsified picture of today's reality. Thanks to the use of experienced pediatric cardiac surgeons, improved surgical techniques and refined examination methods, a large proportion of the children who are operated on today have much better long-term prognoses than at the beginning of this surgical technique in the 1980s. The last option is the possibility of a heart transplant, which can now be carried out with good results. There are therefore various treatment approaches for the HLHS that give the child the opportunity to lead a fulfilled life with a good quality of life.

Back to heart defect descriptions