The atrial septal defect (ASD), atrial septal defect (unusual abbreviation VSD) or atrial septum defect is a hole in the heart septum between the two atria of the heart ( septum interatriale ). With about 7.5% of all congenital heart defects, it is the third most common congenital heart malformation. In addition to the singular forms described here, ASD also occurs in connection with other heart defects and its effects must then be assessed differently.

The need for treatment ( intervention ) depends on the symptoms , on the location, on the opening area (defect size ), on the shunt minute volume ( shunt volume, flow rate , volume flow , volume flow , shunt time volume, volume per unit of time, often given as a percentage of stroke volume , of cardiac output or from the minute volume of the circulatory system [= lung time volume ]), from the direction of flow (right-left shunt or left-right shunt) and from accompanying diseases. The transition between the indication for surgery and the wait- and- see behavior is fluid. The basic formula applies cardiac output plus left-right shunt volume flow equal to lung time volume plus right-left shunt volume flow.

Both septal defects may also be risk factors for cerebral haemorrhage .

All septal defects increase the likelihood of cerebral embolisms of all kinds because they enable crossed (= paradoxical) embolisms. Without a septal defect, all venous emboli are trapped in the pulmonary arteries. This applies not only to blood embolisms, but also, for example, to air embolisms , fat embolisms and amniotic fluid embolisms .

The ASD occurs in five variants: 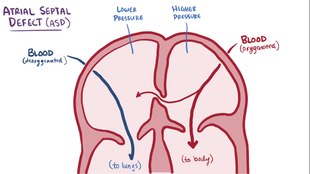 The foramen ovale usually closes completely in the first few days or weeks of life. If this does not happen, one speaks of a persistent ( persistent, persistent ) foramen ovale ( PFO ). Children are mostly not affected; pawing anosis has sometimes been described in newborns. Treatment is usually not necessary even in adulthood. Rarely, however, does a paradoxical embolism occur , in which a venous blood clot from the legs passes through the hole and z. B. can trigger a stroke (apoplexy). In addition, a thrombus can form in the area of ​​the septal defect, which can also cause a cerebral infarction . There are various data on the PFO prevalence in the literature (up to 30%).

This open foramen oval is a standard variant . It is not a septal defect in the strict sense .

Three German medical societies recommend to date (as of September 2018) in a common guideline for patients with a patent foramen ovale with a moderate or a strong right-to-left shunt after a cryptogenic stroke ( English : embolic stroke of undetermined source , ESUS) to prevent recurrence of the interventional closure of the PFO. As an alternative for endovascular occluder implantation is antiplatelet therapy or possibly an oral anticoagulation for secondary prevention is recommended.

Following initial evidence in 1996, several studies have now shown a connection between persistent foramen ovale and migraines . This heart malformation is found in 60–80 percent of migraineurs with an aura . An artificial closure of the foramen ovale by means of a small umbrella ( occluder ) inserted using cardiac catheter technology makes the migraines disappear in one of two cases.

There is also an increased risk of cerebral gas embolism ( arterial gas bubble embolism ) in divers . Even without a septal defect, gas embolism is one of the most common diving accidents . It is an air embolism caused by the formation of gas bubbles . See also decompression sickness and barotrauma .

Sometimes an open foramen ovale occurs together with an atrial septal aneurysm ( atrial septal aneurysm , abbreviation ASA). The ASA is not yet classified in the current ICD-10 ; in the new ICD-11 it will have the key LA8E.Y ( aneurysm of the atrial septum ). It is a pronounced mobility of the septum ( hypermobile septum ) or pressure-related ( interatrial pressure difference ) bulges or bulges of the cardiac septum into the right atrium ( lateral deviation ). In this bulge ( aneurysm ) thrombi (blood clots) can form. This further increases the likelihood of an embolic stroke. The thrombus then flows with the blood from the left atrium into the brain and blocks an artery there . An interatrial shunt exists in up to 90 percent of those affected. The prevalence is around one percent of the population. Even in the aneurysm, a right-left shunt or a left-right shunt occasionally occurs (after a perforation ). With an atrial septal aneurysm, there is often atrial fibrillation as an additional double (crossed or uncrossed, paradoxical or orthodox ) causal possibility of otherwise inexplicable insults . For treatment, an umbrella prosthesis ( umbrella ; English: occluder, German: occluder , from Latin occludere , to close ') is implanted .

In pediatric cardiology, these aneurysms are divided into four degrees of severity (types A to D) depending on the size of the shunt.

Pathophysiologically , people with an atrial septal aneurysm must reckon with six different possibilities for a cryptogenic ( i.e. for an etiologically unexplained ) embolic (= ischemic ) apoplex:

Ultrasound image of an ASD II. The apex of the heart is on the right, the atria can be seen as black rounded structures on the left. The defect appears as a break in the white line between the atria. The lower right atrium is enlarged, as are the pulmonary veins that run into the upper left atrium.

The most common form (about 7% of all congenital heart defects) is the atrial septal defect of the secondary type, also called ASD II. The hole is in the middle and, depending on its size, due to the pressure difference in the auricles, a more or less large amount of blood flows from left to right, i.e. back into the pulmonary circulation.

In many cases, this defect ( shunt ) can be closed by inserting a closure system with the cardiac catheter : A 'double umbrella ' or a self-centering metal framework made of nitinol ( Amplatzer system) is inserted through the catheter into the hole and unfolded there. After overgrowth with the inner lining of the heart ( endocardium ), the hole is permanently closed. The prerequisite for this is that the hole is not too big, is in the middle and has smooth edges. If these requirements are not met, the hole must be closed surgically.

This heart defect is sometimes only diagnosed in adolescence or advanced adulthood. It has been shown that, above a certain shunt size, patients often experience increasing symptoms ( heart failure ) with increasing age . That is why important ASD II are usually closed today, even if the patients feel comfortable.

A foramen ovale that remained unclosed after birth due to further malformations is classified as an ASD II if it is hemodynamically relevant.

The next most common form is the ostium primum defect, also called ASD I. The hole is in the lower part of the atrial septum, reaches up to the valve level and is often associated with a malfunction of the mitral valve ( between the left atrium and left ventricle = heart chamber ), more rarely with a malfunction of the tricuspid valve ( between the right atrium and right ventricle ). This heart defect is based on an inhibition of the endocardial cushion formation. Cardiac catheterization or transesophageal echocardiography ("swallowing echo ") before surgery is rarely necessary. This defect is always closed surgically with a patch made of plastic or the body's own tissue. If a frequently occurring minor mitral valve malfunction is found after the operation, an increased risk of endocarditis must be considered.

A very rare form of ASD is the sinus venosus defect. It is located in the upper part of the atrial septum and in about 90% of cases one or more pulmonary veins that are missing into the right atrium or the superior vena cava ( vena cava superior ) are detected. Therefore, a transesophageal echocardiography or a cardiac catheter is almost always necessary before an operation. This defect is also closed surgically with a patch and the pulmonary veins are transposed in such a way that normal blood flow into the left atrium is guaranteed. As with many defects in the atrial area, cardiac arrhythmias are more common in the long term .

At the coronary sinus which open coronary veins into the right atrium. The lack of a roof on the coronary sinus results in a free connection between the two atria. Here, too, there is a shunt with the possibility of paradoxical embolism. This defect can also be closed surgically .

During the physical examination, within the auscultation, a split in the second heart sound is noticed, which is fixed, i.e. does not change during inhalation and exhalation. There is also a slight systolic in the 2nd ICR on the left ( intercostal space ), which is caused by the relative narrowing of the pulmonary valve; The relative tightness of the tricuspid valve can also lead to a diastolic area that is accentuated at the lower sternum .

The gold standard for detection is the transesophageal ultrasound examination with a non-respirable contrast medium . Sometimes color Doppler echocardiography can also show that there is little blood flow through this opening.

In the case of small defects, a spontaneous reduction in size or automatic closure can be awaited. However, if the right half of the heart is already enlarged, the defect should be closed in infancy (3 or 4 years of age). Nowadays, even in childhood, the operation can be carried out in a minimally invasive manner by opening the chest on the side . This approach has proven to be cosmetically cheap and very well accepted, especially with young girls.

If the defect is in the middle of the atrial septum, closure with a double umbrella can now be performed in 70% of patients. This is used as part of a cardiac catheter operation. In the majority of cases, the procedure can be carried out under transesophageal echocardiographic control. In individual cases, an angiographic display is required.

In the case of very large or poorly located defects, an operation with the help of the heart-lung machine must be carried out. Depending on the size, the defect is closed with a direct suture or with a patch made from the patient's own pericardial tissue.

Although nowadays a diagnosed ASD usually closed , is, this malformation a fundamental risk for those affected. Since smaller ASD ( even with normal ultrasound examinations remain) partially unnoticed occur for example, in apparently healthy divers despite observing all precautions diving accidents because the The ASD's filtering function of the lungs remains incomplete, which would otherwise prevent an embolism in the body's circulation . Paradoxical cerebral embolisms ( apoplexy ) must also be considered (see above).