Coarctation of the aorta

An aortic coarctation (ISTA) or coarctation of the aorta ( Coarctatio aortae ) is understood to mean the narrowing of the aorta (main body artery ) in the area of ​​the aortic arch . It is a vascular malformation that occurs alone, but also in connection with congenital heart defects . It accounts for about six to eight percent of all congenital heart defects, is more common in men than in women, and often occurs with Turner syndrome (monosomy X).

MRI image of a coarctation of the aorta (yellow arrow)

There are two theories about the origin:

Traditionally, a distinction is made between preductal and postductal aortic coarctation based on the location of the stenosis in relation to the ductus arteriosus (Ductus Botalli). This classification has been partially abandoned today, since the two forms can merge into one another during the embryonic period ; However, due to differences in symptoms and prognosis, it is shown here.

Before birth, the ductus arteriosus diverts almost all of the blood coming from the right heart past the pulmonary arteries into the aorta. So there is a short circuit between the pulmonary and body circulation , in which the body circulation receives large amounts of blood from the pulmonary circulation. The lungs are not yet functioning at this time, so it would make no sense to give them a privileged blood supply. The ductus arteriosus usually closes at birth - the two circuits are now separated. The oxygenation of the blood takes place in the lungs, while the left heart drives it throughout the body.

also: infantile form of the ISTA

If the narrowing of the aorta is in front of the confluence of the Ductus arteriosus Botalli, the left heart must first fight against increased flow resistance due to the narrowed artery. In the case of severe constriction, the left heart can soon no longer cope with this load ( left heart failure ), and the blood also backs up into the lungs, from which it can no longer be “pumped out” - the result is shortness of breath ( dyspnoea ).

In such cases, the ductus arteriosus itself often remains open after birth and flows into the aorta after the stenosis. This leads to an admixture of venous blood into the aorta and thus the entire lower half of the body. This appears cyanotic (bluish discoloration), it can lead to prerenal kidney failure due to reduced and oxygen-poor kidney blood flow. A pulse deficit between the upper and lower halves of the body, which is otherwise typical for ISTA, may be absent in these cases - after all, the aorta receives blood from the right heart via the ductus arteriosus.

The preductal form of ISTA usually becomes symptomatic soon after birth and leads to an acute danger to the life of the newborn (see below). Hence the name "infantile form". 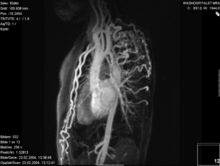 If the stenosis is after the ductus arteriosus has passed, the blood can usually use alternative channels (collaterals) via the inner thoracic and intercostal arteries ( aa. Thoracicae internae and intercostales ). These are therefore expanded and show up in the X-ray as rib damage.

In this case there is an increased blood pressure in the upper half of the body, but this is not as high as in the preductal form and initially does not overload the left heart. The ductus arteriosus is also usually closed in this case, so there is no admixture of oxygen-poor blood into the body's circulation.

In this form, the aforementioned deficit between arm and leg pulses is typically found: the arms have high (increased) blood pressure with clearly palpable pulses, while the legs have relatively low blood pressure with weak pulses or pulses that cannot be detected at all.

The post-ductal form of ISTA often remains symptom-free for years and only shows up in school children, adolescents or early adulthood. Hence the name "adult form".

A newborn baby can get into a critical situation in the first days or weeks of life due to coarctation of the aorta (especially preductal) in the course of the circulatory change. The lower half of the body with all internal organs ( kidneys , liver , intestines ) is poorly supplied with arterial blood due to the narrowing of the aorta . As a result of insufficient blood flow to the liver, it is not uncommon for excessive neonatal jaundice ( hyperbilirubinemia ) to be present. The increasing stress on the heart quickly results in cardiac shock symptoms with a pale-gray-pale appearance in the newborns. In advanced shock, there is kidney failure with a lack of urine output - this is often confirmed in retrospect by parents when asked. Since all of these symptoms can also occur in the context of a severe newborn infection, antibiotics are often first treated under this suspicion and valuable time is sometimes lost before the correct diagnosis is made by echocardiography and the life-saving administration of prostaglanders begins. During this time, a shock-related overacidification of the blood can develop (metabolic acidosis; arterial pH not infrequently below 7.0!), Which then usually causes permanent brain damage. Every doctor who treats newborns needs to be familiar with this clinical picture and, if the symptoms are suspicious, it is better to consult a pediatric cardiologist once too much rather than too late.

However, it is not that rare (especially with the postductal form) that an ISTA is only diagnosed in older children or in adolescence or adulthood. In these patients there are numerous bypass or collateral circuits as a result of the bottleneck. Especially the vessels of the ribs, in the shoulder area and the chest wall arteries can have enlarged enormously. Pronounced collateral circulation can cover up a high-grade ISTA, since the measured differences in blood pressure in the arms and legs can then also be small.

Both forms of ISTA require careful monitoring and therapy - if left untreated, preductal ISTA results in a mortality of 60–90% even in infancy. Rapid surgical correction is indicated here. The postductal form also leads to a reduction in life expectancy if it is correspondingly pronounced - the surgical correction is therefore also indicated here, despite the initially minor symptoms, and should be carried out by the age of 6 at the latest. A careful assessment and planning of the further course of action by qualified persons (pediatricians and pediatric surgeons) is therefore always necessary.

Patients are dependent on lifelong follow-up examinations, in particular the control and treatment of high blood pressure that may have developed after long-term use of the ISTA. Also on the Endokarditisprophylaxe has to be lifelong.
The life expectancy of an ISTA patient is to be regarded as normal today with early detection and therapy.