Cow dung laid out to dry for fuel production in India 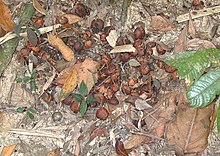 The droppings of the Australian cassowary 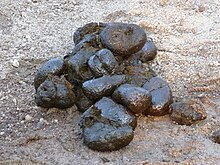 Excrement from a Poitou donkey

As excrement ( lat. Excrementum , excretion ') are generally products of excretion of the urinary tract ( urinary ) and defecation out of the gastrointestinal tract ( feces hereinafter).

Numerous uses of animal and human excrement are known.

In nature, excrement fertilizes the soil and is also used in agriculture as fertilizer in the form of liquid manure . Bird droppings from fish-eating birds are broken down as guano and used as a phosphate- rich “natural fertilizer”.

Feces also contribute to the spread of plants, as undigested plant seeds are excreted by animals in different parts of their habitats . Feces also feed insects and other animals, some of which let their offspring grow up in it.

Many animals use excrement for communication purposes , for example to recognize the sensitivities of conspecifics or the fertility of sexual partners or to mark territorial boundaries .

The examination of excrement is used in archeology and medicine . In medicine, excrement plays a role in diagnostics , as its analysis allows conclusions to be drawn about the patient's health. By analyzing the contents of prehistoric cesspools, archaeologists can draw conclusions about the culture or the environmental conditions of a specific time. In addition to the type of food, the excrement analysis also allows conclusions to be drawn about the absorption ( incorporation ) of toxic (e.g. lead ) or radioactive substances (e.g. plutonium , polonium -210).

According to theories of alternative medicine , taking a small amount of your own urine every day ( autologous urine treatment ) is generally beneficial to health.

Plant-fiber-rich animal manure is used in wood-poor areas of the world as fuel for cooking and heating by burning it directly after drying . When traveling in the desert , dried camel droppings are also an important fuel. If biogas is obtained from manure, manure is also used indirectly to generate electrical energy or as fuel .

African peoples (e.g. Maasai ) also use cow dung as building material and as plastering for their huts.

Urine can be used as a chemical raw material for tanning , staining and for making paints .

Various excrements were used by indigenous peoples as part of ritual acts. For his investigations in this area, among other things, John Gregory Bourke , an American cavalry officer , received an honorary doctorate .

A pleasure-oriented preoccupation with excrement is - unless there is another underlying disorder such as dementia - referred to as excrementophilia .