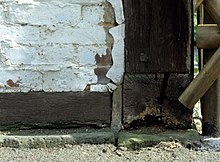 The basic sleepers are often the most endangered wooden beams of a half-timbered house, as in older buildings they often lie directly on an alternately damp foundation without an underlying seal . Foundation projections below the threshold can also cause the rainwater that runs off the facade to accumulate on the threshold, the thresholds can also be exposed to splashing water due to raised terrain or building methods that are too low, and thick coatings prevent drying out. The wood damage to the sleeper initially occurs in the invisible lower area, where the sleeper rests on the foundation, and then progresses inside, while the outside usually shows no visible damage for a long time. A threshold damaged in this way must be replaced in its entirety or in its damaged areas. This requires the entire building to be supported. The new threshold should be installed so that it is protected against accumulating water and allow evaporation of water on both sides.