A scaffold is a temporary, generally reusable auxiliary structure made of mostly standardized scaffolding components made of wood and / or metal - steel or aluminum, which is used as a work platform, for fastening the formwork or as a protective device.

A safety scaffold as a protective structure

A work scaffold is used to carry out work on structural parts that are otherwise not accessible or difficult to access, such. B. plastering or work on the gutter. It must be strong enough to carry the people working on it, their equipment and the necessary work material. A work scaffold on which only a plumber has to install a gutter can therefore be designed in a lighter way than a scaffold from which natural stone work is carried out on the facade. Working scaffolds are described in DIN EN 12811: 2004.

Protective scaffolding is not intended to be used to carry out work on the structure from there, but to secure workers and passers-by against falling or to protect them from falling components. The safety scaffold is such a protective structure. It provides fall protection for unsecured work surfaces such as walls that have not yet been raised. The roof safety scaffold is required to secure those working on the roof from falling deeper. The roof safety scaffold also serves to protect the people below against falling objects. In the case of areas over which work is carried out for a longer period of time, it may be necessary to arrange protective roofs on scaffolding in order to protect passers-by or workers from falling objects. Protective scaffolding is described in DIN 4420-1: 2004.

Falsework is an auxiliary structure that is used to build arches and vaults. Falsework is called formwork in concrete construction and is used to support the empty formwork . 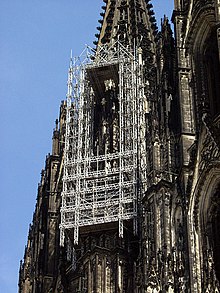 Scaffolding is also differentiated according to its supporting system.

In the case of a standing frame, the covering parts are attached to or on a frame component such as a wooden rod, a "ladder" or a frame that is fixed on the floor. This is the most commonly used support system.

A hanging scaffold is used when a standing scaffold cannot be placed. This is often the case on bridges or similar structures. The suspension is either on a separate bridge-like component, on a boom attached to or on a console.

In the case of a cantilever frame (Austrian term: scrap frame), beams are attached to the ceiling, on which the covering parts are then placed. It should be noted that the wall openings for the beams can only be closed after the scaffolding has been dismantled.

In a bracket scaffold are consoles dowelled to the outer wall or in a steel cable suspended in or cast-in suspension loops. In contrast, standing scaffolding only needs a few attachment points or anchors that can be left in the facade in the form of nylon dowels or threaded sleeves .

Scaffolding made from bamboo poles in Hong Kong

Pole frames are made of wooden or bamboo poles or simple metal tubes.

Ladder scaffolding has been around since the early 1950s. They are further developments of the wooden pole frames, in which two semicircular wooden poles perforated at regular intervals are connected in storeys with at least two rungs each. These so-called ladders are usually three floors high (one floor is two meters). Scaffolding planks were loosely placed on the rungs and handrail boards and stiffening diagonals (boards with holes and longitudinal slots) were screwed onto the scaffolding ladders. The workload compared to knotting was considerably reduced. In addition, there were far fewer sources of error when setting up the ladder scaffolding. This type of scaffolding was widespread until the early 1970s.

The use of wooden ladder scaffolding, however, for ergonomic reasons (they are difficult to set up because of the high weight and long lever arm) and for reasons of occupational safety is also seen rather historically. The use was inconvenient and inexpedient because of the restricted passage height of sometimes less than 1.50 meters and the narrow width of less than 60 centimeters. Due to the Ordinance on Industrial Safety and Health , resulting from the Occupational Safety and Health Act , together with the required risk assessment , they can no longer be used in the commercial sector in Germany.

System scaffolds have numerous connection points to which system components can be attached and the scaffolds can be connected to one another.

Parts of the scaffolding

Scaffolding at the New Al Garhoud Bridge in Dubai

Stand scaffolding at the Norderneyer lighthouse

Scaffolds essentially consist of a few different individual parts. The vertical frames or module uprights stand on feet that are height-adjustable by means of a spindle , so that unevenness in the ground can be leveled out. Another frame can be attached to the top of a frame. Floors or scaffolding mats, which form the levels of the scaffolding, are placed on the frames. Modern system scaffolding clamp the shelves between the two frames in such a way that they cannot be lifted out accidentally or by wind suction. For a smooth assembly and dismantling it is important that all frames are exactly vertical and all scaffolding decks are horizontal.

The ascent and descent between the floors is made possible by the ladder corridors, which today usually consist of special scaffolding floors with an integrated flap and fixed, foldable ladder.

Basically for every scaffolding - which does not correspond to any standard design - a proof of structural stability is required. In the case of system scaffolding, it can be replaced by type approval provided that it is used as intended.

The vertical tubes of the frame are equipped with fastening options, on which railings are hung in two levels. At the bottom, a toe board must also be clamped between the supports so that you cannot slide under the railing if you slip and so that no material can fall down. The narrow or front sides are also secured by railings and end toe boards. One speaks here of a three-part side protection.

In order to adapt the scaffolding to the contours of a building, such as cantilevered cornices , brackets can be mounted on the supports, into which further planks can be hung. Larger distances, e.g. B. for entrances, can be bridged by installing lattice girders

The lowest frames are attached to system-independent lattice girders with couplings according to EN74. In the case of system-bound lattice girders, the respective manufacturer-specific system connections are used.

Large scaffolding will be equipped with climbing elevators for the transport of materials and people.

Elevators for the transport of materials are only required from a scaffold height of 14 meters and a scaffold width of 10 meters, but can also make economic and ergonomic sense at lower heights.

A distinction is made between elevators:

The respective anchor grid can be found in the instructions for assembly and use, which must be attached to each of the various lifting devices. This also contains the load-bearing capacity and the installation conditions.

The European standards EN 12810 and EN 12811 and their parts apply to work scaffolding throughout Europe. In Germany, a distinction is made in standardization between work and protective scaffolding. That is why there is also a separate “residual standard” DIN 4420-3-2006-01 for protective scaffolding in Germany with selected scaffolding types and their standard designs. For shoring, however, EN 12812: 2004 and EN 12813: 2004 apply across Europe (however, EN 12813 was not introduced by the building authorities in Germany and is not used in practice). Mobile scaffolding and rolling scaffolding are regulated by DIN 4422-1 and HD 1004: 1992. Further DIN standards and European standards regulate the requirements for individual scaffolding parts. DIN 18451 VOB / C General technical contract conditions for construction work. Scaffolding work usually forms the basis for execution and billing. In addition, the work safety regulations must be observed.

For the approval of scaffolding, the approval guidelines of the DIBt must also be observed. Here detailed requirements are made of the z. In some cases, they go well beyond the normative requirements that must be complied with for approval.

In the occupational health and safety regulations, a distinction is made between:

When erecting scaffolding , the scaffolding company must comply with the Occupational Safety and Health Act, its ordinance, here the Industrial Safety Ordinance, and the technical rules for operational safety TRBS 1203, 2121 Part 1 and 2, scaffolding access and leaning ladders. If the "technical rules for operational safety" are complied with, the employer can in this respect assert the presumption of compliance with the regulations of the industrial safety ordinance. According to TRBS 1203, the construction of the scaffolding may only be carried out by a qualified person and suitable and trained employees.

In the event of an accident , this means that the company whose employees have an accident on a work equipment “scaffolding” that has not been created in accordance with regulations is the first to be responsible and not the scaffolding company that created it. The reason is that the qualified person named by the employer, who can also be the employer himself, before using the scaffolding for the first time (TRBS 2121 Part 1, No. 5.3), check that the scaffolding is apparently free from defects and that it functions reliably, depending on the respective Use must convince. Since, according to TRBS 1203, high demands are placed on the qualified person in training, a high level of expertise is required for the "apparent examination".

In a figurative sense, scaffolding also refers to a plan , design or structure that fundamentally prepares an execution (framework of ideas, framework for the novel, etc.).

In general, a scaffold is also a climbing aid that should enable certain heights to be reached. There is this game Scaffolding and those for construction .