Forerunner in the Austro-Hungarian monarchy

At the end of the 19th century, the Czech Catholics in Bohemia and Moravia , both of which belonged to Austria-Hungary at the time, formed the first political parties: the Christian Socialist Party was founded in Litomyšl in 1894 and the Catholic National Party of Moravia in Přerov in 1896 .

In January 1919, the Czechoslovak People's Party ( Československá strana lidová , or ČSL for short), which united all Catholic parties , was founded in Prague ; Jan Šrámek became its first chairman. In 1921 the ČSL entered the government and remained active there until 1939.

After Czechoslovakia was occupied by National Socialist Germany in 1939 ( Protectorate of Bohemia and Moravia ), Jan Šrámek acted as head of the Czechoslovak government in exile in London . After the end of the occupation in 1945, the party became part of the "government of national unity" under Edvard Beneš .

After the Communists came to power in 1948, numerous members of the ČSL were persecuted and arrested. The party then lost all influence and became a bloc party , a puppet of the Communist Party, similar to z. B. the Eastern CDU . She was always represented by a ministerial post in the government.

During the Velvet Revolution in 1989, the ČSL made itself independent again and tried to break away from its compromised positions and leadership figures of the past. In 1992 it merged with the small, short-lived Křesťanská a Demokratieická unie (KDU), which was formed after the revolution, and thus took its current name. After the break-up of Czechoslovakia and the independence of the Czech Republic , the party joined the government of the bourgeois Občanská Demokratická strana (ODS) under Václav Klaus in 1993 , the party chairman Josef Lux was deputy prime minister at this time. In the fall of 1997, however, their ministers resigned from the government, which led to its overthrow. Then she was represented in the interim government under Josef Tošovský , after the early parliamentary elections in 1998 she went into the opposition.

Like almost all other parties in the Czech Republic, the party has not been spared from scandals. Most of them fall in the early 1990s, when she held the Ministry of Defense under Antonín Baudyš , Vilém Holáň and Miloslav Výborný .

Against the cooperation of the two large parties ČSSD and ODS, the smaller bourgeois parties KDU-ČSL, ODA , Unie svobody (US) and Demokratická unie (DEU) came together in 1998 to form a "coalition of four". After the departure of ODA and the merger of the other two components, the KDU-ČSL entered the parliamentary elections in June 2002 in an electoral alliance with the right-wing liberal US-DEU , the so-called "Koalice" (coalition). It turned out, however, that the two parties' target group of voters was completely different. The “coalition” won 31 mandates, 22 of which went to the KDU-ČSL. Both parties then joined the coalition government of the victorious Social Democrats ( ČSSD ). 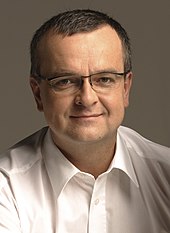 From 2003 to 2006 the party was headed by Miroslav Kalousek , who, in contrast to his predecessor Cyril Svoboda, represented the more right-wing wing of the party, which was against a coalition with the ČSSD . Immediately after his election in November 2003, he refused to take up an office in the government as usual and maintained this refusal even after the government reshuffle and the resignation of Vladimír Špidla in summer 2004. On February 19, 2005, after the outbreak of a financial scandal, he called for the resignation of the Prime Minister concerned , Stanislav Gross . Gross retaliated by trying to force the KDU-ČSL to leave the government, which exacerbated the government crisis. On April 25, 2005, Gross finally had to resign. The cabinet of his successor Jiří Paroubek also included the KDU-ČSL and the US-DEU.

In December 2006, after a long crisis in the party, the mayor of Vsetín , Jiří Čunek, was elected as party leader. A few weeks earlier he had drawn attention to himself when he forcibly removed several Roma families who had not paid their rent in Vsetín from their apartments in the city center and placed them in container settlements on the outskirts. The crisis and the resignation of Kalousek broke out due to a dispute over the participation of the KDU-ČSL in the government. After the parliamentary elections , the previous government alliance with the ČSSD lost its majority. However, it was also not enough for a "civil coalition" between the ODS , the KDU-ČSL and the SZ , since this alliance was missing exactly one seat to a majority with 100 of 200 votes. In this situation, the party leader Miroslav Kalousek , who is considered to be on the right, openly showed himself to continue the government with the Social Democrats with the tacit tolerance of the communist KSČM . However, since the party sees itself as "anti-communist", this aroused great criticism and resistance within the party, so that Miroslav Kalousek announced his resignation after great pressure.

From December 2006 to May 2009, the KDU-ČSL was ultimately a member of the governing coalition under Mirek Topolánek , together with the ODS and the Greens , made possible by the fact that two Social Democratic MPs, who now tacitly support them in parliament, made it possible. Linguistic abuses of the party chairman Čunek towards the Roma and criminal proceedings because of various corruption allegations also led to considerable disputes within the coalition. In particular, Foreign Minister Karel Schwarzenberg , appointed by the Greens, was a sharp critic of Čunek's person. For a while, Čunek had to suspend his post as Minister for Regional Development and was completely replaced by Cyril Svoboda in his government offices for a few weeks in the spring of 2009, shortly before the Topolánek II government was overthrown .

On May 30, 2009, Cyril Svoboda was re-elected party chairman in Vsetín to succeed Čunek. Subsequently, the more right-wing ex-chairman Kalousek left the party and founded the TOP 09 party with former Foreign Minister Karel Schwarzenberg at the helm. Well-known other members of the KDU-ČSL - including z. For example, former defense minister Vlasta Parkanová and parliamentary group leader in the House of Representatives Pavel Severa - followed Kalousek and left the party. 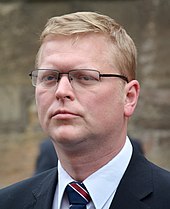 While Kalousek started very successfully with this new party with over 16.7%, the KDU-ČSL had to cope with a historic defeat in the 2010 parliamentary elections . With 4.39%, it no longer made the leap over the 5 percent hurdle and was therefore no longer represented in the Czech or Czechoslovak lower parliament for the first time since 1919. Cyril Svoboda announced on the evening of the election that he no longer wanted to run for party chairmanship. On November 22, 2010, the only 33-year-old and largely unknown Pavel Bělobrádek was elected as the new chairman. With him as the top candidate, the party succeeded in re-entering the House of Representatives with 6.78% in the early parliamentary elections in 2013 .

After the elections, the party joined the newly formed government with the ČSSD and the ANO in 2011 and provided three ministers. I.a. Party leader Bělobrádek entered the government as Minister of Science and Deputy Prime Minister. In the run-up to the 2017 elections , the KDU-ČSL temporarily formed a joint electoral alliance with the STAN , which, however, was dissolved shortly before the elections due to poor poll results and the increased threshold clause (10% instead of 5%) for such an alliance. Ultimately, the party again stood alone with Bělobrádek as the top candidate and managed to return to the House of Representatives with slight losses of 5.8%. However , the KDU-ČSL is no longer represented in the governments formed after the elections under the new Prime Minister Andrej Babiš .

At the party congress in March 2019, Pavel Bělobrádek no longer ran for party chairmanship. The delegates elected the MP Marek Výborný as the new chairman, who won the runoff election against the former Agriculture Minister Marian Jurečka with 256 to 124 votes . After the unexpected death of his wife, Výborný resigned from party leadership after less than a year in office. On February 25, 2020, the former Agriculture Minister Marian Jurečka was elected chairman of the party with 205 votes (146 and 10 votes for his challengers Jan Bartošek and Jan Horníček). 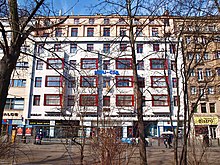 The KDU-ČSL is a mass party due to its long history and roots in the population. After the Velvet Revolution it had over 95,000 members (1991). However, a clear downward trend can be observed. At the end of the 1990s, with around 60,000 members, it was the second largest party in the Czech Republic behind the Communist Party KSČM . That corresponded to about 0.6% of all Czechs. Most of the members were middle-aged. The party did not succeed in recruiting new members to compensate for the loss of older members. From the 2000s onwards, the number of members decreased rapidly: to 40,000 in 2008 and below 30,000 in 2013.

From the Velvet Revolution until the 2000s, the party had relatively stable election results of 7–9%, with it naturally performing best in the Catholic rural regions of Moravia . As a result, she occupied between 13 and 22 of the 200 seats in the House of Representatives. The influence of the party was, however, greater than the number of its members and parliamentary seats suggests, since it was necessary for most governments as a “majority procurer”. That changed when she fell below the 5 percent hurdle for the first time in 2010 and left the House of Representatives (she was still represented with 5 seats in the Senate). It has been represented in both chambers of parliament again since 2014, but not in its previous strength.

The party traditionally has its strongholds in South Moravia, where the religious ties of the population are higher than in the rest of the country.

Results of elections to the House of Representatives

Political parties currently represented in the Czech Chamber of Deputies