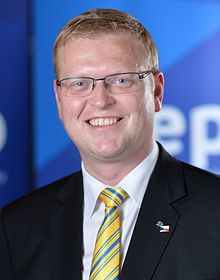 Pavel Bělobrádek (born December 25, 1976 in Náchod ) is a Czech politician . He has been party leader of the Christian Democratic party KDU-ČSL since 2010 and was Minister of Science from 2014 to 2017.

From 1995 to 2001 he studied veterinary medicine at the Faculty of Veterinary Hygiene and Ecology at the University of Veterinary Medicine and Pharmacy in Brno . Between 2004 and 2008 he completed his doctoral training in the same position. In 2003 he received first degree certification from the State Veterinary Administration of the Czech Republic, and in 2010 he studied economics, political science, law, international relations, political marketing and public presentation at the Liberal Conservative Academy CEVRO .

On November 20, 2010, the KDU-CSL held an extraordinary convention in Žďár nad Sázavou , where he was elected chairman of the party, a position that has been vacant since Cyril Svoboda resigned on May 29, 2010. He took over the party leadership from the acting former first vice-chairman Michaela Šojdrová. He won 280 of 425 votes, more than Michael Šojdrová (84 votes), Ludvik Hovorka (41) and Jaroslav Orel (20). In the run-up, he spoke about having multiple sclerosis , but his condition is said to be stable for ten years.

After the parliamentary elections in 2013 , Bělobrádek and his party entered into coalition negotiations with the ČSSD and ANO in 2011 and on January 29, 2014 was appointed second Deputy Prime Minister and Minister for Science, Research and Innovation in the Bohuslav Sobotka government.

Bělobrádek is married and has a son and two daughters.