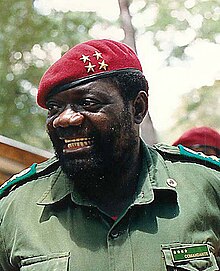 Jonas Malheiro Savimbi (born August 3, 1934 in Munhango , Bié Province , Angola ; † February 22, 2002 in Lucusse , Moxico Province , Angola) was an Angolan politician and leader of the anti-colonial movement UNITA , which launched a civil war against the country after the country gained independence incumbent MPLA government and is now a political party .

Flag of the UNITA

Savimbi's parents belonged to the Ovimbundu ethnic group , the subgroup of the Bienos who live in the province of Bié . Since his father, pastor of the Igreja Evangélica Congregacional de Angola (IECA), was an employee of the Benguela Railway, he was born in Muhango himself, but grew up in Chilesso and attended IECA schools there up to about secondary school . Since the qualifications of Protestant schools were not recognized by the colonial authorities at that time , he then had to take them to a Catholic school run by the Marist Order in the neighboring province of Huambo . He then went to Portugal to study medicine on a grant that American missionaries had given him. There he attended high school in order to obtain the higher education entrance qualification. When he was only missing the ideological subject of patriotism , which was compulsory during Salazarism , he dropped out of school. The reason was political: he had now joined groups of Angolan students in Portugal who were campaigning for an anti-colonial liberation struggle. Like the entire group, Savimbi was threatened by the PIDE , the Portuguese secret police at the time . He therefore fled to Switzerland , where he had connections through Protestant networks. He studied in 1960/61 at the University of Freiburg i. Üe. Medicine and then political science in Lausanne ; He was supported by the Foyer Saint Justin Foundation with a monthly grant of CHF 400 . As is customary in Portugal to this day, he was referred to as "Dr." in Portuguese because of his university degree . However, since he did not do a doctorate , this does not correspond to the doctorate, which was mostly assumed when transferring to other language areas. It was also often assumed that the “Dr.” should be understood as a common term for “doctor”, which was also a mistake, since Savimbi never completed a medical degree.

Positioning in the anti-colonial struggle 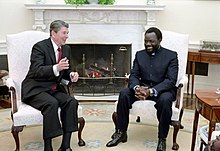 Meeting with US President Ronald Reagan in the Oval Office on January 30, 1986

With UNITA, Savimbi carried out guerrilla actions against the colonial power Portugal in eastern Angola , although these were kept within narrow limits. He received some support from China, which he visited occasionally. There were repeated armed conflicts with the MPLA, and less so with the FNLA, which was hardly present in the east. According to Portuguese files from this period that are now publicly accessible, in early 1970 he concluded a collaboration agreement with the colonial power that was directed against the rival movements. For the post-colonial period, it was decisive that UNITA, through its anti-colonial struggle, acquired the sympathies of the overwhelming majority of the Ovimbundu, by far the largest ethnic group in Angola; for most of them, Savimbi became something of an idol at the time.

Savimbi had good relations with China in the 1960s, from whose army he was also trained. In the 1970s, however, there were closer contacts with the US government and the apartheid government in South Africa . These were intensified during the decolonization conflict of 1975 and maintained during the civil war that followed . In 1975 UNITA received $ 24.7 million on the instructions of US Secretary of State Henry Kissinger . Savimbi himself received an official invitation from the then incumbent US President Ronald Reagan in 1986 . He was also supported by the Moroccan King Hassan II .

After Angola's independence from Portugal in 1975, UNITA did not participate in power. The victorious MPLA assumed sole rule and established a one-party regime that was declared socialist based on the model of the Eastern Bloc at the time .

A little later, UNITA began guerrilla actions against the government without Savimbi adopting a clear ideological position. The civil war in Angola expanded and became internationalized. In addition to UNITA, which received political and financial support from South Africa's apartheid policy , among other things, through military operations and the USA, the ruling MPLA was subsequently strengthened by the Soviet Union , Nicaragua and Cuba through military aid and military advisers . UNITA had a number of military successes, controlled a third of the country in 1983 and brought parts of the economy to a standstill, but remained far from an overall military victory. In 1989, Reagan's successor George HW Bush announced that he would continue to support Savimbi's UNITA financially with $ 15 million a year.

There have been various attempts to end the civil war. A peace treaty was reached in May 1991 and free elections were held 16 months later . António da Costa, a long UNITA companion of Savimbi, went public beforehand with the warning that Savimbi was already planning the next war. Since UNITA was defeated in the elections, Savimbi refused to recognize the result and resumed military action. In 1997 UNITA participated in a “government of national unity and reconciliation”, but Savimbi himself remained “in the bush” and carried on the civil war. The MPLA government increasingly chose this for itself, primarily because of its greater resources.

Savimbi died on the run during a firefight with Angolan government troops in February 2002 near Lucusse ( Moxico ). He was buried by soldiers in Luena the next day . As a result, a ceasefire was concluded between UNITA and the Angolan government. UNITA gave up its armed struggle and was transformed into a political party.

Savimbi's body was exhumed and buried on June 1, 2019 in Lopitanga near his father's grave.

Savimbi's speeches were more similar in their references to speeches by western than by African politicians. a. often classical philosophers from these countries. It is controversial to what extent this was justified by his high level of education or his American advisors to the Heritage Foundation . In 1989, while on a trip to the USA, Savimbi gave his famous speech “The Coming Winds of Democracy in Angola” in front of the Heritage Foundation, in which he presented his actions as a freedom fight for democracy and against communism to the public.

From 1985 to 1988, Grover Norquist , president of the lobby organization “Americans for Tax Reform”, was Savimbi's economic advisor.

Savimbi was married to four women and has numerous children, but the exact number is unknown.

He appeared in the video game Call of Duty: Black Ops II , in which he fought against the MPLA as the leader of UNITA. A lawsuit by his children against the portrayal of their father as a " barbarian " in this game was rejected by a French court.