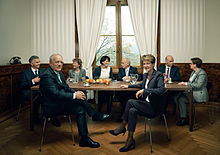 Corina Casanova (back, first position from right) in the official Federal Council photo 2015

Corina Lydia Casanova (born January 4, 1956 in Ilanz ; resident in Vrin and Ruschein ) is a Swiss lawyer . From January 1, 2008 to December 31, 2015, she was Federal Chancellor of the Swiss Confederation , which as such headed the Federal Chancellery . She is a member of the Christian Democratic People's Party (CVP).

On June 29, 2015, the Federal Chancellery announced that Corina Casanova would waive a third term in the renewal elections on December 9, 2015. Walter Thurnherr was his successor .

Casanova grew up in the Graubünden villages of Tarasp and Ruschein , where she also attended primary school. At the canton school in Chur she obtained the Matura type B in 1977 . She then studied law at the University of Freiburg and graduated in 1982 with a licentiate . In 1984 she was admitted to the bar of the Canton of Graubünden . She then worked for two years in the law firm of the former Federal Court President Giusep Nay . From 1986 to 1990 she was a delegate of the International Committee of the Red Cross in South Africa , Angola , Nicaragua and El Salvador .

After Chancellor Annemarie Huber-Hotz announced her resignation, the Federal Assembly elected Casanova on December 12, 2007 as her successor. On January 1, 2016, she handed over the office to Walter Thurnherr .

Federal Chancellor of the Swiss Confederation