The Socijalistička partija Srbije (abbreviated SPS , Serbian - Cyrillic Социјалистичка партија Србије ; German  Socialist Party of Serbia ) is a socialist party in Serbia , which is also shaped by nationalism . It was founded in 1990 by Slobodan Milošević as the successor party to the Union of Communists of Serbia and was the dominant political force in Serbia from 1990 to 2000.

After Milošević's death in 2006, Ivica Dačić became the new party leader and in 2008 formed a pro-European coalition government with the Democratic Party of Boris Tadić . 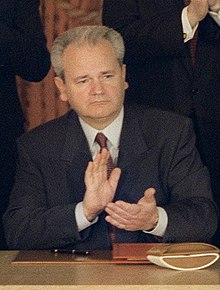 Ivica Dačić, party leader of the SPS since 2006.

The party was founded on July 27, 1990 by Slobodan Milošević . In 1992 she formed a coalition with the nationalist Serbian Radical Party and later with the JUL ( Yugoslav Left ) party of Milošević's wife Mirjana Marković .

In 1998 the party formed a "government of national unity" together with the Serbian Radical Party.

After Milošević's electoral defeat in 2000, the party went into opposition .

Ivica Dačić has been party leader of the Socialist Party of Serbia since 2006 .

In the parliamentary elections in Serbia in 2007 , the party won 16 out of 250 seats with 5.6 percent of the vote. In the 2008 parliamentary elections , the SPS-led electoral alliance received 7.8 percent of the vote and 20 seats. After the election, in contradiction to the previous policy, she agreed with the European-oriented forces around President Boris Tadic to form a government. In return, the future coalition partners elected SPS politician Slavica Đukić-Dejanović as parliamentary president on June 25, 2008 . With the formation of the government on July 7, 2008, the SPS chairman Ivica Dačić was elected Minister of the Interior and Deputy Prime Minister.

In October 2008, after all personnel decisions of the new government had been made, the party concluded a so-called “reconciliation agreement” with the democrats around Tadić, which formulated EU accession and the preservation of the territorial integrity of Serbia as the common goals of the coalition parties. The agreement is viewed as historic in so far as both sides - the socialists in power and the democrats in the opposition - fought bitterly during the Milošević regime.

In 2010, the SPS declared itself in its new program to be a democratic left party that opposes populism , racism and privatization and advocates a socialism of the 21st century , which also includes elements of liberalism and social justice .

As a junior partner, the SPS has been in a coalition with the Serbian Progressive Party since 2012 .