This article deals with the region in Southeast Europe, for information on the village of the same name in Ukraine see Batschka (village) . 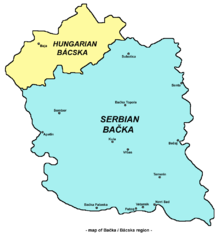 Batschka in Serbia and Hungary 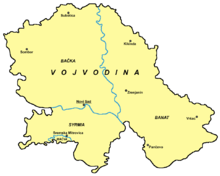 The Batschka ( Serbian / Croatian Bačka , Serbian - Cyrillic Бачка , Hungarian Bácska , Slovak Báčka , Russian Бачка ) is a region in Central Europe and Southeastern Europe . The Batschka is divided between the states of Serbia and Hungary , with the southern and largest part belonging to Serbia and divided into three districts of the autonomous province of Vojvodina . The northern part, on the other hand, belongs to Hungary and forms the southern part of Bács-Kiskun County . The Batschka is for the most part a fertile plain, which is bordered by the Danube in the west and south and the Tisza in the east .

From the 7th century onwards, Serbian and other Slavic tribes from Central Eastern and Eastern Europe settled in the Batschka. From the 10th century, after the Magyar invasion of Europe, the Batschka was part of the Hungarian ruling dynasties. The name Batschka was derived from the medieval fortress Batsch ( Бач / Bač ) northwest of Novi Sad . Batsch was the seat of a Hungarian county and an archbishop during the rule of Austria-Hungary .

The fortress was destroyed by the Mongols around 1242 , then rebuilt and finally conquered by the Ottomans around 1543 . Large parts of today's Serbian Batschka belonged to the fiefdom of Stefan Lazarević . As early as the Middle Ages, a mixture of Serbs , Magyars and other ethnic groups settled in the Batschka. In the 16th century, the Serbian nobleman Johann Nenad succeeded briefly in proclaiming an independent Serbian empire and at the same time being proclaimed Emperor of Serbia . Later devastated by the Ottomans, Batsch lost its importance; the name was retained in the name for the Batschka region.

From the 19th century, the shipping canals were built in the Batschka , which served on the one hand to irrigate the fertile arable land and on the other as inland waterways between the Danube and Tisza.

In the middle of the 19th century the Hungarians rose against the Habsburgs, u. a. because of the concessions the Habsburgs granted the Serbs at the expense of Hungarian claims. The Serbs took advantage of this situation to proclaim the Serbian Voivodina in 1848, referring to the autonomy rights granted by the Habsburgs, which they had fought for in the struggle against the now continuously declining Ottoman Empire . The Serbian de facto regime was able to hold its own from 1848 to 1860. After the agreement between Hungary and the Habsburg dynasty, the “Compensation” , the Batschka was awarded to Hungary, all autonomy was denied and the Serbian Voivodina was divided.

From the second half of the 19th century until 1918, the entire region belonged to Hungary as part of Austria-Hungary. Because of the rigorous assimilation policy due to the population conditions at the expense of the non-Hungarian population and the increasingly rapidly growing Serbia south of the Danube, there were frequent uprisings by the non-Hungarian population. After the defeat of Austria-Hungary in World War I , most of the Batschka was slammed into Serbia. The northern smaller part remained with Hungary. Hungary had to grudgingly recognize this division with the Trianon Peace Treaty of June 4, 1920.

In the northern part, after the First World War, a communist Soviet republic was proclaimed with the "Socialist Hungarian-Serbian Republic Batschka and Branau / Baranya " . After an unsuccessful attempt to win the support of the Serbs in the southern part, Romanian and Serbian troops dissolved the Soviet Republic.

With the occupation of the Kingdom of Yugoslavia by the German Wehrmacht during the Balkan campaign (1941) , southern Batschka was annexed to Hungary , which at that time belonged to the Axis powers . In Novi Sad, the Hungarian commander, General Ferenc Feketehalmy-Czeydner, shot 1,246 civilians from January 21 to 23, 1942 , of whom 809 were Jews, 375 Serbs, 8 Germans and 18 Hungarians. Several hundred civilians were thrown under the ice of the frozen Danube and drowned.

After the end of the war, the state borders were restored in accordance with the Trianon Peace Treaty of 1920. In view of the advance of the Red Army , most of the Danube Swabians were evacuated. The evacuations from the Batschka and the Banat began too late: Here the own "ethnic group leadership" and the German occupation authorities had put themselves in the wrong place. Many stayed behind when German troops retreated.

The participation of the ethnic Germans in the war against Yugoslavia served Tito's partisans as a justification for their political line against the German minority . After the AVNOJ resolutions of November 21, 1944, the Danube Swabians were expropriated. By spring 1945, around 90% of the remaining Yugoslav German population had been interned: central labor camps for men who were fit for work, local camps for the population of entire towns and internment camps for women, children and the elderly who were unable to work. In these camps too, medical care was poor, there was abuse, shootings and rape, and tens of thousands died of malnutrition and disease. In 1947 larger groups were able to leave or flee. Over time, the area was settled by Yugoslavs from poorer regions of the People's Republic of Yugoslavia.

Larger cities and communities in the Batschka

Serbian districts in the Batschka