This article is about the city of Zvolen in Slovakia. For the similarly named city Zwoleń in Poland see there.

Zvolen (German Altsohl , Hungarian Zólyom - older also Ózólyom , Latin. Veterosolium ) is a city in central Slovakia . It is located at the mouth of the Slatina river in the Hron / Gran and gives a district its name.

View of the city center

The city was mentioned for the first time in 1135 and is one of the oldest prehistoric settlements in Slovakia, because important trade routes have crossed at the strategically favorable location of the city since ancient times. Only ruins are left of the town's original watchtower, the so-called Pustý hrad (literally "desert castle") on the opposite bank of the town.

In the second half of the 14th century (1370–1382) King Ludwig I of Hungary had a mighty hunting lodge ( Altsohl Castle ) built as a summer residence in this Upper Hungarian town . The Diet of 1378 took place near the city, where his daughter Hedwig was married to the Polish King Władysław II Jagiełło .

The expanded and connected fortifications of the castle-like castle and the city withstood the repeated attacks by the Turks , but were conquered by the rebels during the uprising of Francis II Rákóczi (class uprising, around 1700).

With the railway connection in 1871 , the city developed into a modern transport hub and center of industry. The largest brickworks in Slovakia is located here, as well as a university of forestry and timber industry, a theater and museums.

During the Slovak National Uprising , the city played an important role; an armored train set up west of the castle reminds of this. In 1950 the Technical University of Zvolen was founded, making Zvolen a university town .

The city comprises the following 6 districts:

The Zvolenské Podhradie district was incorporated as early as 1888 and does not constitute a separate administrative unit of the city. 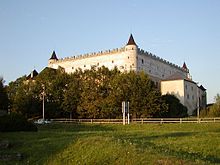 Since 2007, Zvolen has been a member of the European city association Douzelage , each of which includes cities from one country in the European Union .

Other partner cities are:

Municipalities in the Okres Zvolen