Freeware ([ ˈfɹiːˌwɛə ]; from English free “free of charge” and ware “goods”) generally refers to software that is made available by the author for free use. Freeware is usually proprietary and is thus, according to the Free Software Foundation , in contrast to Free Software (English "free software" ), the Wider sweeping freedoms granted as changes to the software. With freeware, the programmers only waive a usage fee, but not copyright. The users are only granted one right of use; Changes to the software or the use of parts of the program (such as code snippets) are prohibited. Freeware programs can be copied and passed on freely. The difference to public domain software is that it can be used and changed completely freely. 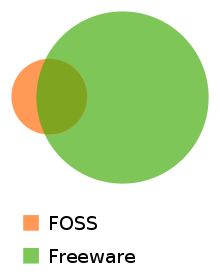 The term freeware was founded by the American programmer Andrew Fluegelman, who wanted to sell his communication program PC-Talk in 1982 beyond the usual and cost-intensive distribution channels. However, the meaning of the term freeware today is different than it was back then, according to today's terminology one would speak of shareware with the sales model for PC Talk at that time .

An author can after the copyright law , the case of transfers of his work contractual terms set widely. Freeware is not a precisely defined, legally valid term. It must be checked in each individual case on the basis of the license conditions specified in an end-user license agreement which specific rights the author grants the user. Typical contractual conditions from the author are, for example, that distribution is prohibited for a fee or that use is only free for private individuals, i. H. use in a commercial environment requires a license fee. Whether the term freeware is still applied correctly in the case of such or further restrictions on use is a matter of dispute, at least under the aspect of general freedom of use.

A special form of freeware is software products that are based on a chargeable operating system, such as B. Internet Explorer and Microsoft Windows Media Player . The free use is tied to the possession of other Microsoft licenses and the consent to the extension of rights of the existing licenses for Microsoft.

For the following license models, freeware is usually used as a generic term, sometimes synonymous. However, they are associated with restrictions that result from the name of the license model:

The term freeware can be found in some areas: Firstly with the computer magazines , which like to use freeware as a simplified generic term (e.g. for free software or lite versions) and with hobby programmers who download their smaller software projects free of charge on their homepage and do not want to deal with software license law. Many common web applications are programmed or further developed by open source communities (e.g. Mantis or TYPO3 Community). The use of this software is free, the developers ask users for a donation.

Another source of freeware is former commercial software, which at the end of its commercial marketing is made available to the user community as freeware, partly as a promotion for new software. In some cases, freely downloadable freeware is made available to prevent software from becoming abandonware that is no longer available. Borland , for example , released some of its legacy products because of this. B. Turbo Pascal or Diversions Entertainment the computer game One Must Fall .

Although the term freeware is most commonly applied to smaller software products, there are some examples of larger free software products such as: B. the web browser Opera or the world simulation computer game Slaves to Armok II: Dwarf Fortress .

Most open source software, if not all, is also freeware in addition to its broader qualities; an example is Mozilla Firefox .

In addition to individual authors, there are also groups, so-called coding groups , who program software as a hobby and offer it as freeware, e.g. B. in the computer game area homebrews or fangames . There are also so-called file hosting - services and open source communities (. Eg .: SourceForge , GNU Savannah and GitHub ) where programmers create their software projects, manage and provide other users.