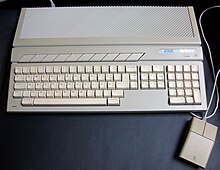 The Atari 1040 STE was a home computer of the Atari Corporation , which was introduced in 1989 as the successor to the Atari ST series in order to regain lost market shares from the rival Amiga . STE stood for ST Enhanced .

Compared to the Atari 1040 ST, the STE u. a. the following new features:

Otherwise the device is largely identical to the 1040 STFM. The case and keyboard are the same, and the connections are largely the same. In addition, the STE has two analog cinch connections for audio output in stereo.

In addition to the 1040 STE variant shown here, which is the most popular in Germany, the 520 STE was also quite popular in France and England, and only differed from the 1040 STE in terms of the storage capacity. Since SIMMs were also used on this computer, the computer could easily be upgraded to 1, 2 or 4 MiB.

In addition, dealers offered the computer with different main storage configurations and advertised them as 2080 STE or 4160 STE. Atari itself did have a 4160 STE prototype, but it never went on sale and was probably only delivered to developers.

In addition, Atari planned a STE with an integrated 80286 processor in order to be able to offer an IBM-compatible computer. The computer was also to be equipped with a 40 MB 2.5 "hard drive, but never got beyond the status of a prototype.

The STE was presented to the public for the first time at the Atari trade fair in August 1989.

The changes to the operating system and the changed color registers for the extended palette, however, resulted in many incompatibilities in existing software, especially in games. Initially, public domain games and software in particular supported the STE, e.g. B. Music programs like the ProTracker or Audio Sculpture. Later on, commercial games, especially those from the German developer Thalion Software , made partial use of the STE's expanded capabilities. A few demos , especially "Braindamage" by the Aggression group, demonstrated the STE's multimedia strengths. It was not until the end of the 16-bit era that commercial games appeared that could only run on the STE, e.g. B. "Sleepwalker" by Ocean , "Obsession" and "Substation" by Unique Development Sweden or "Stardust" by Bloodhouse.

In summary, the STE could only partially catch up with the long-standing Amiga in terms of technology, but not overtake it. The Amiga 500 remained the favored gaming platform. The sales of the 1040 STE fell well short of expectations, among other things because Atari in Germany shied away from replacing the STFM with the STE and offered both systems at the same time - the STE at a higher price.

In 1991 Atari released the MegaSTE, a variant of the STE intended for semi-professional use, and in 1992 Atari introduced the successor to the 1040STE with the Falcon030 .

For the STE some hardware tailored to this device came out, including the following:

Nowadays there is still a fan base for classic computers like the Amiga or ST series, who regularly produce games and demos as well as music for these machines. The Atari scene uses the STE in almost all productions, at least with the extended color palette or the digisound. However, to this day there is only a minority who devote themselves intensively or exclusively to the STE.

Many programs for the STE series can be run on today's PCs with the emulators Steem or Hatari . These are available here: