The 5.71 meter high tower from the 587 c't editions published up to the 30th anniversary has been in the foyer of the publisher since October 2013

The c't is published by Heise Zeitschriften Verlag in Hanover ; The editors are Christian Heise , Ansgar Heise and Christian Persson , the editor-in-chief is Jürgen Rink.

The name "c't" originally stood for computing today, the name for a 16-page component of the electronics magazine elrad, which was previously published by Heise-Verlag . In October 1983 c't was spun off as a separate, independent magazine. The first edition 12/83 was published on October 19 at the Systems in Munich. Initially the magazine appeared monthly, in 1997 it was changed to a bi-daily publication frequency.

In the Netherlands, the c't is published by F&L Media in Nijmegen . Editor-in-chief is Noud van Kruysbergen.

The c't presented itself on the market of computer magazines initially as a "hardware-oriented" magazine, which explained to technology-loving owners of " home computers " of the first generation, besides software development, the modification of purchased hardware up to and including self-construction. In the 1980s in particular, many complex hardware and software projects were published in the c't , which covered the entire field of computer hardware, a younger representative of this type is the c't-bot . With the advent of the IBM PC architecture and the various Microsoft - operating systems they took an increasingly broader space in the coverage. However, the c't sees itself as independent of platform and operating system and continues to dedicate itself, albeit to a more modest extent, to the Linux , macOS , Android and Solaris operating systems .

In addition to practice- related computer topics, c't has always focused on the political and social dimensions of technology development. Even in the early years, critical reports reported on pornographic mailbox content or the effects of the postal monopoly on modems and other telecommunication devices .

Topics that are continuously updated are data protection , censorship and the legal problem of software patents . The c't also reports critically on the Trusted Computing Platform Alliance and the endeavors of the industry to implement digital rights management systems. Important major IT projects in Germany such as the motorway toll system , the software for calculating the “ Unemployment Benefit II ” introduced in 2005 as part of the Hartz IV reform or the topic of voting computers are also critically monitored and examined for weaknesses. A half-page clinker in the article on the 25th anniversary of the magazine quotes the author of Fefes blog on behalf of the typical readership u. a. Regarding the interaction between print media and blogs: "I am grateful to Heise that you led all the forum liability battles on behalf of the poor bloggers."

An integral part of the magazine is also the “c't Story”, a short story that has often been written by well-known science fiction authors such as Andreas Eschbach , Helmuth W. Mommers or Peter Schattschneider . The "c't Story" is almost the only remaining professional publication possibility for science fiction short stories in a magazine in Germany since of 2010.

The c't is aimed equally at advanced and ambitious computer users, professionals and specialists. The readers of c't are "highly qualified computer professionals and exceptionally often act as advisors and decision-makers in matters of technology."

As in almost every computer magazine, hardware and software tests are an integral part of the c't. In contrast to the competition, however, the magazine does not name any test winners, but rather summarizes the strengths and weaknesses of the examined products in a test result. The aim is to enable the reader to make a needs-based decision depending on the budget and purpose of use.

The c't regularly comes with DVDs that contain program collections compiled by the c't editorial team. These "software collections" of freeware , shareware and free software have been dedicated to topics such as " Office ", " Security " or " Linux " since 2003 . In addition, a collection of computer games appears once a year, which the editors consider to be recommended for children and young people. Before that, CDs were published twice a year, mostly covering a wide range of topics. Occasionally, data carriers not created by the editorial team are distributed via the magazine, such as B. Microsoft security tools.

In addition to the fortnightly published c't, special issues have developed. The c't Digitale Fotografie and the c't special Mac & i appear four times a year, both of which can also be subscribed to. In addition, the special issues c't compact, c't medien and c't extra are published. These focus on one topic (e.g. Linux or networks). At the end of 2011 the magazine c't Hardware Hacks appeared for the first time, from which the independent magazine Make: emerged . A special issue on the mobile operating system Android c't Android has been published once a year since 2012 . In October 2018 a special issue "Retro" was published, in which hardware and software from the time before the year 2000 was described.

An April Fool's joke article is hidden in the first April issue of each year, which is very believable due to the differentiated presentation. In April 2006, for example, an article explained the alleged prevention of filming cinema screens using infrared sequences that disable digital cameras and camcorders . The April Fool's joke of issue 4/1995 described a red flashing mainboard chip that should make / dev / null more efficient. In April 2016, an alleged tool was presented that is supposed to protect against copyright infringements when copying and pasting.

C't became known far beyond the usual audience in 1995 when a short test of the “ SoftRAM ” program from the American company Syncronys was printed with the result “ineffective” and the assessment “placebo software”. The German distributor Softline obtained an injunction, according to which the test report may no longer be distributed in this form. c't-Redaktion and Heise-Verlag countered one issue later with the article “Placebo forte”, in which “SoftRAM” was picked apart in detail and partially disassembled . In this article it was shown that the alleged ability to "double" the actually available main memory under Windows (by runtime compression of the memory contents) was a single bluff and the program was completely ineffective. The subsequent press coverage swept the product not only from the German, but also from the US market.

C't made headlines in 2005 with the readers' competition " Hommingberger Gepardenforelle ". The aim was to develop search engine optimization strategies and thereby uncover search engine ranking mechanisms .

In the 24/2007 edition, the c't reported on USB memory sticks available on the market that could only store partial areas instead of the specified one or two gigabytes of data. The old data was overwritten when the new data was continuously written.

Detection of fraudulent activities on the dating portal Lovoo

In September 2015, c't revealed unfair practices by the dating portal operator Lovoo . After about 50 GB of e-mail boxes, screenshots and source code had been leaked to the magazine, it was revealed how the manufacturer uses fake profiles to encourage users to make in-app purchases . Without this, communication with supposedly interested contact persons would have been difficult or impossible to maintain.

In October, the c't followed up by disclosing Lovoo's use of chat bots.

The German-language c't has been published monthly since issue 12/1983 and due to the increased volume (the c't with the largest number of pages to date was the April 1997 issue with 614 pages) since issue 11/1997 every 14 days. The Dutch c't appears monthly under license from F&L, which also publishes the Dutch iX and Chip .

The c't wants to stand out from other computer magazines such as Computer Bild , PC-Welt or Chip with its factual reporting and its presentation without lurid headlines . There is no need to interpret a message or a report as a sensation and thus possibly encourage interested parties to buy.

The c't had the highest sold circulation in 2001 with almost 390,000 issues. Since then, the number of magazines distributed has fallen to around 69% of this value. Up until 2009 there was an increase in subscriptions sold every year. Since then, that number has been falling rapidly.

What is unusual for a general-interest magazine is the comparatively high number of subscribers, currently 82.6 percent of the circulation. This makes the c't a computer magazine with one of the highest subscriber bases in Europe.

Average number of issues per issue sold through subscriptions 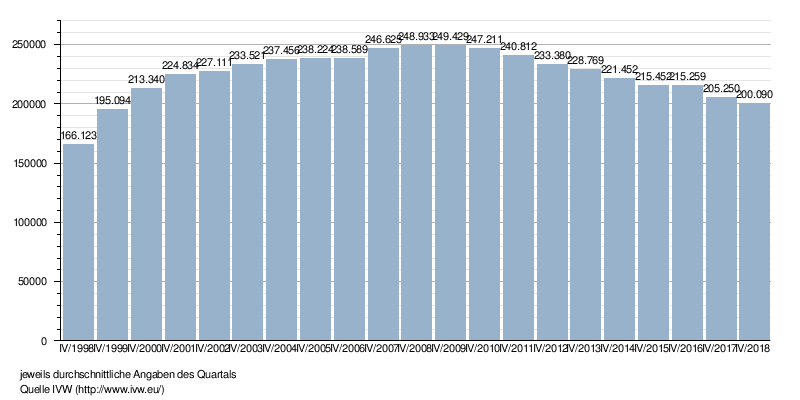 c't contributions in other media

From 2003 to June 2011 the c't magazin.tv was broadcast weekly on hr television . The program took up topics from the printed magazine edition; It was moderated by Mathias Münch and c't editor Georg Schnurer . On June 25, 2011 the broadcast was discontinued.

Georg Schnurer was available as an expert on the radio broadcast Escape - The Expert (RBB). The last post in this series was published on January 28, 2012.