The PC world is published by the International Data Group (IDG), which in addition to its US sister magazine PCWorld publishes numerous offshoots in many countries around the world.

Founded at the end of 1983, the PC-Welt developed into the highest-circulation PC magazine in Germany. Chip , which was founded as a technology magazine in 1978 and has been the market leader in the PC press for years, was quickly overtaken. However, since 2002 the PC world has had to struggle with circulation problems. The number of booklets sold at the kiosk almost halved compared to the high in the 4th quarter of 2001, the number of booklets sold at low prices ("special sales" and " on-board copies ") increased from just 88 (4th quarter 1998) to 19,944 (4th quarter 1998) Quarter 2003) to 98,487 copies in the 4th quarter of 2009. The PC world lost circulation well above the industry average. The editors-in-chief and the publishing director changed in quick succession. Since the 4th quarter of 2007, Chip has once again been in the lead in terms of circulation. The PC world is also losing out online; The Chip website has been one of the most visited PC websites in Germany since it was founded.

The critical reporting of the PC world contributed a lot to the former edition rally. In particular, the weaknesses of Microsoft software were regularly pointed out. In 1998, for example, the magazine published the article "Windows 95 unauthorized" (03/1998 edition), which explained the composition of the CD key. A valid key number for Windows 95 was printed in the article to show how simply Microsoft tried to protect programs: The last seven-digit number of the CD key only had to be divisible by seven to represent a valid key. Microsoft was outraged by this and other tips in this cover story, took it to court (unsuccessfully) and accused the editors of “inciting to break the law” and “betraying trade secrets”. The article sparked a year-long boycott by Microsoft of the magazine. Otherwise, the PC world also reports on the world beyond Microsoft: As a special issue, there is now a Linux magazine that appears 4 times a year.

In the days of MS-DOS , articles were repeatedly published that described how to speed up DOS; Among other things, it was claimed that a 32-bit DOS could be conjured up on the basis of the Windows 3.11 kernel even before Windows 95 appeared . This type of article jokingly earned the PC world in professional circles the title “Bildzeitung der Computerzeitung” long before the “real” Computer Bild existed. Readers complained in letters that if everything that the PC world publishes was correct, then one's own computer would have to run “now at the speed of light”.

In March 2009 the German Press Council issued a public reprimand to PC-WELT. The press council criticized an article about hacking tools that appeared in issue 10/2008. Such reporting on illegal programs would not be in line with journalistic principles. The reputation of the press would be at risk if a magazine were to issue “instructions for use” for prohibited software.

The PC world is currently being published in three editions: as a pure magazine edition without a data carrier, as a DVD edition and as a plus edition with 32 additional pages and two DVDs. At the beginning of June 2014, a letter from the subscription management reached the PC-Welt subscribers with the notification that the normal DVD edition with a data carrier has been discontinued and the plus version will be supplied in the future. Note (because it is missing in the IntanService letter): This costs 2 euros more per issue, and you can of course cancel extraordinarily. In June 2015 the DVD edition was temporarily released for the last time (with a DVD). Since July 2015, only the Plus edition has been available as a subscription. The normal DVD edition has been available in stores again since September 2015.

In the fourth quarter of 2014, the average monthly circulation according to IVW was 105,386 copies. That is 30.23 percent (45,680 issues) less than in the same quarter of the previous year. The number of subscribers fell within one year by 14.06 percent to 53,432 subscribers. 50.70 percent of readers currently subscribe to the magazine. 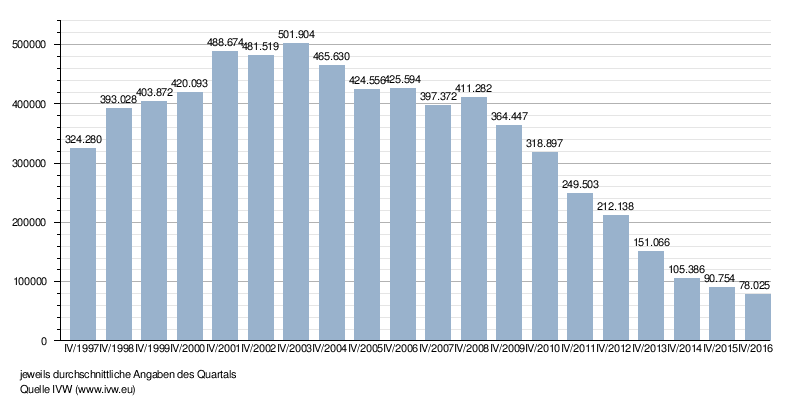 Number of subscriptions sold each month

From the beginning of September 2009 pcwelt.de cooperated with RapidShare.com . The downloads from pcwelt.de were hosted on the well-known one-click hoster . The cooperation ended with the closure of RapidShare at the end of March 2015. Since then, PC-Welt has offered the files for download via its own server or redirected to the developer's website.